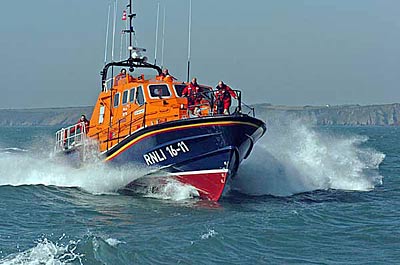 Green Marine (Southampton, United Kingdom) is best known for building extremely fast carbon fiber sailing machines custom engineered to be as strong and light as advanced materials and building processes will allow. (See the cover story “Some Like It Hot” in Professional BoatBuilder No. 123, Feb/Mar 2010.) That’s the glamour. The grittier side of Green Marine’s business for the past two decades has been supplying the Royal National Lifeboat Institution with upwards of 125 robust powerboats for search-and-rescue operations in the waters around the U.K. and Ireland. 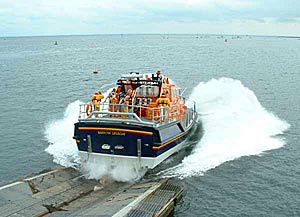 While the various models in the RNLI fleet might seem the antithesis of Green’s lightweight racing machines, the company applies the same materials—foam and Nomex honeycomb core, with carbon and E-glass film-infusion skins—requiring the same elevated-temperature cure cycles in massive ovens. When I visited Green’s shops in Southampton and Lymington in late 2008, three 52.4′ (16m) Tamar-class lifeboats were in various stages of production alongside the 128′ (39m) Bill Tripp-designed sailing yacht Cinderella IV. It was a study in contrasts across the breadth of practical applications for advanced composites.

The Tamar class is the most ruggedly built mid-size composite powerboat that I can recall ever seeing. These all-weather boats can endure 360° rolls or pitchpoling, then proceed to rescue mariners whose craft were not equal to such severe conditions. The boats’ huge carbon fiber structural framing—including unidirectional carbon under the carbon composite engine girder stiffeners—is strong enough to hang 12-cylinder diesel engines from when the boat goes inverted. (A complex fuel-and-lubrication system feeds those engines while they continue to run upside down.)

But the boats must also meet a target speed of 25 knots to satisfy RNLI’s requirement that they cover 50 miles in two hours. So the Tamars are massively built, but with sophisticated lightweight materials. Hulls and decks are film-infused carbon fiber and E-glass laminates over double-thickness foam cores, vacuum-bagged, and then baked at 185°F (85ºC) in ovens dedicated to the specific parts for that production model. 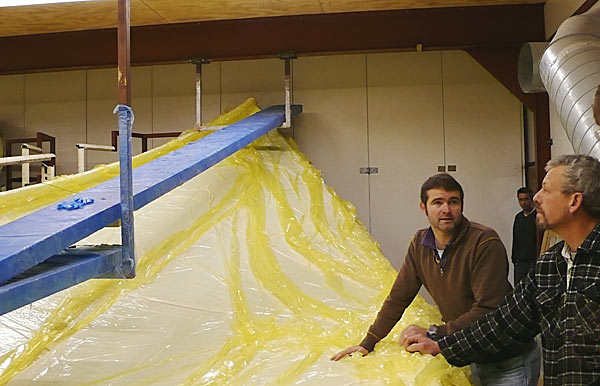 Each hull is laid up in halves. A crew of six takes just five weeks to assemble the hull and cure it—in three cures of about 16 hours each. Laminators apply two different types of E-glass film-infusion materials: 42% resin content next to the 108mm Corecell P800 130-kg/m3 foam core to assure good bonding; and 32% resin content in the remainder of the laminate. Recesses are CNC-machined into the foam core’s upper and lower surfaces along the hull halves’ centerlines. These recesses in the inside and outside skins allow the tapes joining the halves to finish flush with the hull’s inside and outside skins. 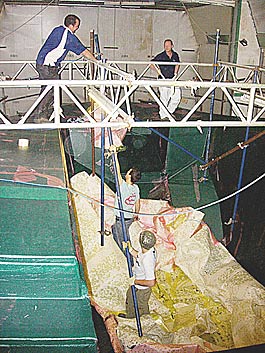 Another crew of five builds the deck-and-pilothouse part in a separate oven. To enhance the boat’s stability, weight is kept as low as possible on the deck part. The inner skin is carbon fiber; the foam core, 30mm of 80-kg/m Divinycell HP.

Most of the structural framing is installed after the hull halves have been pulled from the tooling, adhesively bonded, and tabbed together.

For a boat that goes just 25 knots at full throttle, the internal framing is impressive: four longitudinal stringers reinforce the running surface on either side of the centerline, augmented by six transverse frames. The foam-core carbon fiber frames are prefabricated with carbon unidirectional cap plies and large flanges, adhesively bonded in place, and then laminate-taped with more carbon plies to the hull shell. Note the careful masking of the perimeter of each transverse frame supporting the topsides, so bonding adhesive can’t escape under the frame’s flanges and contaminate the landing zone for the laminates that follow.

As framing is installed, two steel crossbeams—with adjustable screw jacks at each end—span the hull, attaching at the sheer on either side. Because builders fit out the hull after it has emerged from the tooling, it may change shape a bit. They adjust the jacks to spread or pull in the sheer as needed. 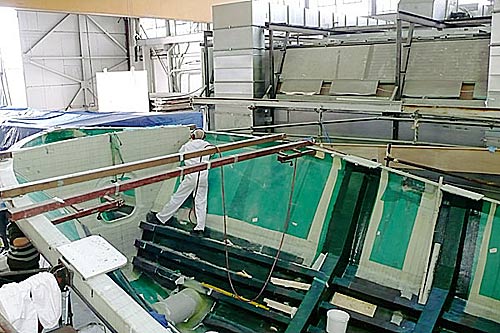 The hull-to-deck joint bonding flange at the sheer is molded in. Note the white melamine-faced panels at the top of each transverse frame. When the transverse frames are tabbed to the hull, the tabbing is run up onto the underside of these panels, producing horizontal bonding flanges where each frame end will meet the underside of the deck. The frame flanges, and the bonding flange along the sheer, are prepared with adhesive paste before the deck assembly is lowered into position. More carbon tabbing is then added to the flanges to further secure the deck to the hull—in effect, a belt-and-suspenders approach to a hull–deck joint, and one appropriate for such solidly built craft.

Great care is taken to ensure that the lifeboat hulls are smooth and fair. Prominent in the photo below are features installed after the hull halves are de-molded: two topside spray deflectors below the sheer; wet-layup hull centerline taping that joins the hull halves; and the starboard-side fairing blister for the leading edge of the bow-thruster tunnel. All tabbing for these features is registered in recessed troughs molded into the hull parts, so a minimum of grinding and fairing is required to produce a good-looking hull. Room-temperature-cured wet-layup laminates are employed for this detail work throughout, followed by one last high-temperature cure cycle after the hull and deck are joined. 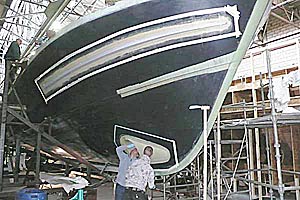 Mariners rescued by these remarkable craft may never know that their composite structures are every bit as sophisticated as many of Green Marine’s extreme ocean racers. Watching the RNLI vessels under construction confirmed that expensive boatbuilding materials such as carbon fiber pre-pregs, film-infusion material, and high-temperature-curing processes that could be dismissed as exotic in fact have very practical applications. I’m confident that with time, the same materials and processes will become part of the composite construction of more-pedestrian recreational and commercial boats.

Editor’s Note: Following Professional BoatBuilder’s visit to Green Marine a year ago, Green Marine sold the production building program for the Royal National Lifeboat Institution to SAR Composites Ltd, an RNLI subsidiary. Green had built over 140 composite hulls for RNLI since 1988 through the Mersey, Trent, Severn, and Tamar model classes. Some of the earliest Green/RNLI boats have been tested and remain structurally sound after 20 years of hard service. On the strength of such vessel performance and a cooperative builder/client history, the RNLI contracted with Green to set up a dedicated factory for the construction of all the search-and-rescue organization’s advanced-composite vessels. Green furnished the RNLI with real-world management procedures, full work instructions and schedules for boats in production, as well as a refitted former Green Marine shop in Lymington—and as many as 30 trained boatbuilders. The facility opened in April 2009.