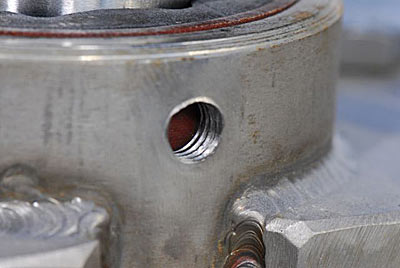 How many times while working around a boat shop or yard have you heard the phrases “Don’t sweat the small stuff”; “Keep the big picture in mind”; or “Don’t get bogged down in the details”?

Unfortunately, those are common refrains, especially in the marine industry, where boats (they’re a product, after all) must be launched on time for bills to be paid and profits made. However tempting it might be, on occasion, to turn a blind eye, to compromise, to simply move on, we ignore critical details at our peril. That’s what my new monthly column, Attention to Detail, is about. In it I will focus on details of boat building and repair that are too frequently overlooked—to the detriment of boats, their owners, builders, and repairers

There are countless definitions of attention to detail, each specific to a trade or activity. For example, a couple of years ago while riding an elevator at a well-known chain hotel, I watched a young staff member draw a handkerchief from his pocket to wipe smudges off the polished surface around the buttons. The smudges had no effect on the safety or reliability of the elevator; they did, however, affect the impression made on guests. More importantly, the handkerchief gesture spoke volumes about that employee’s, and perhaps the hotel management’s, attention to detail.

Similarly, I once saw a pilot-boat coxswain, while preparing to get under way, note that after turning the ignition key, the low-oil-pressure alarm did not sound right. So he turned the key off, went to the engineroom, and discovered that the alarm sender wire was disconnected. Had he proceeded without noticing this problem, the engine would have operated without a low-oil-pressure alarm. A subsequent loss of oil pressure would have destroyed the engine and possibly placed the pilot launch and crew in danger alongside a massive vessel in heavy weather. A few seconds of attention to detail made the difference. 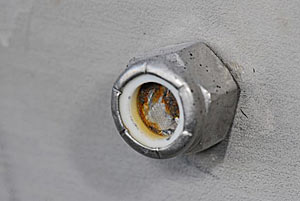 Bolts should be long enough that their threads fully engage their nuts. This bolt is too short.

Here’s another one: A few years ago while aboard an aircraft carrier, I watched as a well-trained member of the flight-deck crew aborted the launch of an aircraft because he spotted a loose fastener on a landing-gear door. I later asked to see the fastener and was amazed that it was no larger than ¼” (6.4mm).

The seemingly random examples above span everything from the mundane to the life-threatening. I would argue that each of the individuals I’ve cited thoroughly understood the meaning of attention to detail, because close observation and responsiveness were ingrained in their work habits. 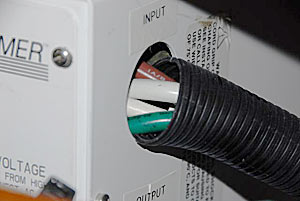 Anti-chafe loom is insufficient for protecting high-voltage shore-power wiring as it enters the metal enclosure of this transformer.

For most of us, such attentiveness develops through a combination of hands-on experience and training—that is, training yourself to notice small but important details of an assembly, vessel, or project. Also, an organization or workplace can foster a philosophy of attentiveness and observation. As a manager, supervisor, or mentor to less-experienced members of a boat building or repair crew, the burden is on you to practice and expect this attention. For instance, you could ask those working in your shop to cover, with tape, any and all fuel, potable water, hydraulic, and other critical open plumbing fittings, in order to keep out dust and debris during assembly. (The same holds true for open fuel and water tanks; they should remain covered unless being worked on.) You could also ensure that docklines are consistently made fast with an appropriate hitch or bend.

Teach by example. When you step aboard a boat or walk into an engineroom, take note of the smell. The odors of vaporizing (leaking) coolant or diesel fuel are distinctive signals; bring them to the attention of the customer. Small gestures though they may be, the message they send to employees and customers alike is resounding: at this shop or yard, details matter.

I’m a hands-on gearhead at heart. I began working in this business as a mechanic and electrician, not a journalist or consultant, and my most fulfilling days remain those that require me to crawl around bilges and enginerooms looking for defects, flaws, and faults—results of poor attention to detail. Sure, I get a personal charge out of catching things that are wrong or dangerous aboard clients’ boats. But my real motivation is more mercenary. Dwelling on details nearly always makes for a safer, more reliable product, which in turn pays dividends by ensuring higher customer satisfaction and loyalty. 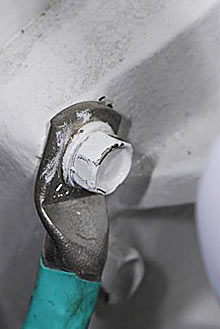 The ground connection here is compromised because the terminal is screwed to a painted metal surface.

In my experience, folks who have the wherewithal to own a boat usually got it by being, among other things, detail oriented themselves. If you are as well, then you’ve succeeded in making it clear that you understand customers’ needs. We simply can’t afford to disappoint them, particularly in these challenging economic times. A new boat riddled with small defects, regardless of their role in the boat’s overall safe operation, sours the buyer’s or owner’s impression. He or she is certain of one thing: the builder, or those maintaining the boat, do not share the owner’s detail-oriented priorities and aspirations. As a result, he or she may decide on a luxury motor coach or membership at the country club instead of buying another boat.

Defects that are avoidable with judicious attention to detail can be found in virtually every system on any boat. Here are several that I’ve encountered repeatedly in my work as a yard manager and consultant: 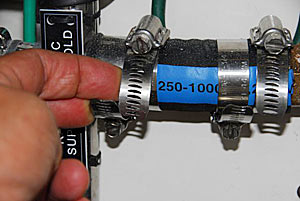 This installation leaves sharp hose-clamp tails exposed where they could cut anyone working in the bilge.

Granted, we can get carried away with details. Attention to them must be balanced with the need to get the job done and remain profitable. Maintaining a high level of attention costs more, initially. Long term, I’d argue it represents an overall savings and increased value for the customer. A consistently attentive crew sends a clear message to customers and other employees that no aspect of the boat you are building or servicing is unimportant. Would you purchase an automobile from a manufacturer whose motto was “We don’t sweat the details”? Would you fly on an airline whose tickets were emblazoned with “We’re cheaper than the competition because our mechanics don’t get bogged down with little problems”? Of course not. So why expect anything different of your customers? Consider your and your company’s attention to details; then ask yourself: Can it be improved; what’s involved in making that happen; and, most tellingly of all, what are the consequences of failing to do so? 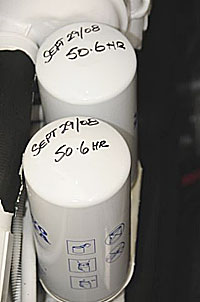 There’s no question when these oil filters were last changed.

In upcoming columns I’ll share specific real-world examples of faults, flaws, and defects I encounter on a regular basis. My hope is you’ll be better able to identify and avoid similar situations aboard boats you’re building or servicing.

The goal is a reliable, seaworthy, and safe vessel every time. Attention to detail will help you achieve it.

About the Author: For many years a full-service yard manager and now a contributing editor of this magazine, Steve works with boat builders and owners and others in the industry as “Steve D’Antonio Marine Consulting Inc.” McGraw-Hill will soon publish his book on marine systems.