A handful of recent product introductions confirm progressive trends in the industry.

Efficient. Wireless. Hybrid. These terms are redefining industrial sectors—ranging from energy generation to consumer electronics and automobiles—that seem to be pulling our global economy out of recession. Mainstream boatbuilding never really strays far from popular trends, so it’s no surprise that certain products in those same categories stuck in my mind after last fall’s two major marine trade shows: IBEX (Miami Beach, Florida) and METS (Amsterdam, The Netherlands). 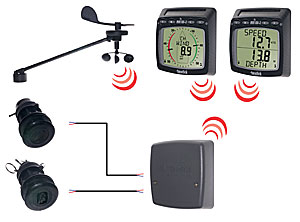 Marine instrument manufacturer Tacktick (Havant, United Kingdom) came early to the wireless game. Since introducing a solar-powered electric compass for racing dinghies in 1996, the company has added a full line of wireless instrumentation featuring large legible LED displays, integrated solar panels, and hundreds of hours of backup battery capacity to keep the displays working. For the builder, designer, or service yard, sealed waterproof wireless units have the appeal of simple installation, portability, and independence from the boat’s electrical system. Anytime you can eliminate a run of wire in the marine environment you reduce weight, complexity, and potential corrosion and system failure. Tacktick’s masthead wind-speed-and-direction unit attaches with just three screws and dispenses with the copper-wire run all the way up the spar. The fully wireless interface of wind instrumentation, compass, and hull transducers makes it easy to add remote handheld wireless displays, with access to data from anywhere on the boat. This is a definite boon to racing crews, who need different information at different places on board at different times. New Tacktick components can also interface with other NMEA-compatible instruments such as autopilots, chart plotters, and hardwired speed and wind indicators. www.tacktick.com.

A new application for wireless technology afloat comes from performance rigging components manufacturer Karver Systems (Honfleur, France) in its KBTi Smart Block. A leader in the resurgence of simple, versatile fiber-stropped blocks in racing, Karver now offers some of its carbon and titanium blocks with an integrated load sensor and wireless transmitter (powered by a lithium-ion battery), so a boat’s computers can get constant readout of block loads, and record load histories for later analysis. The company has applied the same technology to its roller furling system, allowing for simultaneous rig and sail load readings in the same calculation. Karver can custom build its wireless Smart System into other rig components such as padeyes, forestays, and backstays. These applications deliver useful rig strain information that’s nearly impossible to get—in real time—without wireless and improved battery technologies. www.karver-systems.com.

These days there seems to be an iPhone application for just about everything, so it’s reassuring that the marine sector hasn’t been left behind. Palladium Technologies Inc. (Fort Lauderdale, Florida) took home a 2009 DAME Award at METS for its iPhone application, SiMON. This particular app allows the captain or authorized crew to monitor and control most onboard systems from an Apple iPhone or iTouch. The application extends Palladium’s comprehensive SiMON vessel monitoring system to interface with iPhones for delivering a full range of data: engine rpm, oil pressure, temps, heading, wind direction, battery bank status, fuel and water levels, generator readouts, electrical bus, and alarms. Look for more iPhone marine applications as these li’l computers masquerading as phones increasingly become the universal remote control for more technologies on land and at sea. www.palladiumtechs.com. 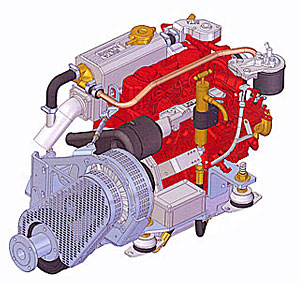 Since the Toyota Prius has shown strong sales even during these difficult economic times, all sorts of manufacturers are scrambling to include the term hybrid somewhere in their product line. Among them at METS was Beta Marine (Quadgeley, U.K.), which has incorporated the parallel diesel and electric hybrid-propulsion option developed by Hybrid-Marine (Sandown, U.K.). Beta’s display package is its fairly common 25-hp, three-cylinder diesel coupled to a 10-kW electric motor from Hybrid-Marine; that enables a boat to operate under battery power alone. When the diesel is running, the electric motor becomes a 5-kW generator feeding electricity back into the 48VDC battery bank, which, in addition to propulsion, can handle significant house loads through an inverter. Hybrid-Marine claims potential increases in efficiency of about 34% over conventional power systems. On the show floor at METS it was gratifying to see some of the marine hybrid technologies that were in development in 2007—when contributing editor Nigel Calder reported on them in Professional BoatBuilder Nos. 107, 108, and 109—seemingly ready for primetime. www.betamarine.co.uk; www.hybrid-marine.co.uk. 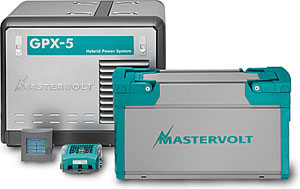 Mastervolt (Amsterdam, The Netherlands) introduced yet another hybrid electrical power option. Its GPX-5 is a single package containing diesel generator, inverter, battery charger, and shore-power input. Through its inverter, batteries can handle start-up demands as high as 10 kW, and provide 2-kW continuous power. The integrated system provides uninterrupted power flow during shifts from shore power to battery to generator. This same technology pegs the diesel generator to always be run at the rate that delivers optimum fuel efficiency; excess power (excess, that is, to immediate demands) is automatically directed back to the battery bank. For builders, one appeal must be that it all comes in a small, easily installed module. www.mastervolt.com. 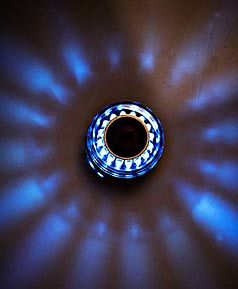 Another area of rapidly advancing efficiency is LED lighting. While interior lighting from LEDs now appears “warmer” than other types of lighting, LED use for navigation lights that meet all standards of visibility and luminosity is expanding as well. You can’t turn around at these trade shows without finding still one more LED company with a better bulb to offer. So, it takes something particularly slick or, in this case, simple to get my attention. The Norwegian company Navisafe has focused its LED applications on very small boats, especially those that don’t have any electrical system. For small-boat owners the need for navigation lights may be limited to a few times a season, so why go to the initial expense of installing an electrical system, and thus risk continued vulnerability and maintenance in a marine environment? Many small-boaters just swallow the risk and go without lights. Navisafe’s waterproof 360° LED, in all-white or tricolor navigation versions, can shine for 30 hours on three AAA batteries; it mounts with a versatile double-magnet system to boat rails, dodgers, light poles, or garments. Just keep its magnets away from the compass, and the efficient LED unit becomes a practical alternative to expensive wiring for small craft that are seldom operated at night. www.navisafe.net.

About the Author: Aaron Porter is the Managing Editor of Professional BoatBuilder magazine.