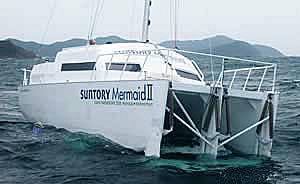 Engineers wielding pumps, dams, and turbines have long pursued the potential of “free” energy harnessed from kinetic ocean forces, such as tides and waves. Indeed, France and Canada have built successful tidal generating stations; and multiple floating prototypes promise more electrical generation from wave motion. However, these are all relatively stationary operations that might require boats only for construction, deployment, and service—but otherwise offer little interest to boat builders or designers.

Enter Japanese sailor Kenichi Horie, well known for a lifetime of unusual exploits at sea. In 2008, at the age of 69, he completed a significant ocean passage in Suntory Mermaid II, a wave-powered boat, going from Hawaii to Japan, and covering 4,350 miles (7,000 km) in 110 days.

Developed by Yutaka Terao, an engineering professor at Tokai University in Japan, the propulsion system of Horie’s Suntory Mermaid II consists of two fins mounted below the bows of the catamaran; as waves pass, the fins move up and down “like the tails of dolphins and whales,” Horie explains. According to Terao, it doesn’t matter which direction the waves come from. The boat is said to be capable of speeds up to 5 knots, but calculating from the numbers above, she averaged just 1.5 knots on her maiden voyage. No speed records shattered there. Still, the success of the technology—deriving propulsive power directly from waves, not wind or fossil fuels—is indisputable.

The boat was built of recycled aluminum (A5083) by the Tsuneishi Forestry Construction Co., a member of the Tsuneishi Group, a major shipbuilder headquartered in Hiroshima. 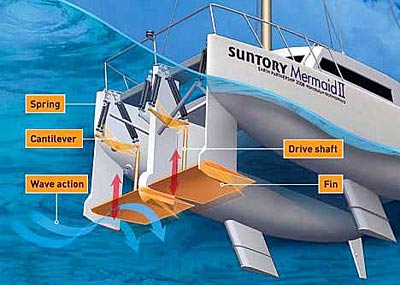 Waves passing from any direction raise and depress the two side-by-side fins, generating propulsive power like the tail of a whale.

About the Author: Dan Spurr is the editor-at-large of Professional BoatBuilder magazine.