We last looked in on Multimarine Composites in Professional BoatBuilder No. 119, page 10, to report on the United Kingdom builder’s recently launched 49′ (15m) multihull for a client who requires a wheelchair. The company has found an unusual yet important niche: catering to disabled sailors. Multimarine’s work enables them to get out on the water with a great deal of independence. 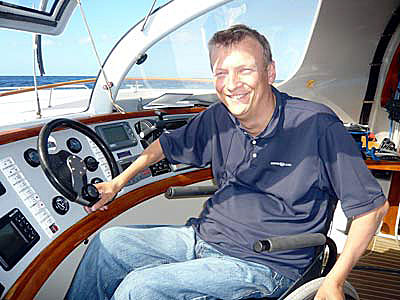 Geoff Holt, disabled in a diving accident, completed a singlehanded transatlantic passage aboard a 60′ (18.3m) catamaran built by Multimarine Composites specifically for the disabled. In fact, Impossible Dream had already crossed the pond with original owner Mike Browne, in 2003.

(Note that Multimarine also appeared in PBB No. 109, page 18, when the builder launched Mary Slim, a VSV, or very slender vessel, designed by Adrian Thompson—not for the disabled, but hardly a conventional boat.) 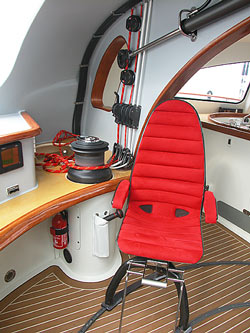 Hydraulics power the raising, lowering, and trimming of sails. 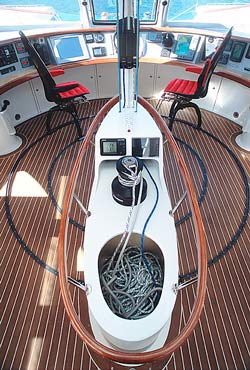 The interior mast console and main navigation area forward. The console winch is for halyards. The row of buttons forward of the winch is for outhaul, mainsheet, and traveler—all operated by hydraulic rams. The seats run on tracks so the skipper can easily move between the nav area and sail controls. 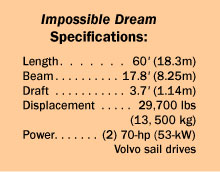 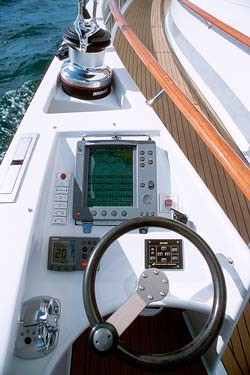 One of two external steering positions.

Aboard Impossible Dream, on deck and in the bridge-deck saloon, wide passageways permit easy wheelchair movement. An internal lift transports the chair down into the hulls, where the berths and head are located. Sails are raised, lowered, and trimmed by pushbutton-controlled hydraulic motors. In fact, all the controls are part of an integrated system, developed by TP Electronics (Plymouth, U.K.), which enables the skipper to steer and manage sails from several helm positions.

Construction is a carbon/foam sandwich engineered by Gurit/High Modulus’s Hamble, U.K., office. The boat was built over a male mold with epoxy resin and wet-pregs. For those unfamiliar with it, wet-preg processing involves a fabric impregnator, which not only controls the correct amount of resin, it eliminates the need to roll out air bubbles. On this project, after impregnation each piece of fabric was hand-laid onto the mold and vacuum-bagged in three sections, starting with the underside of the bridge deck, followed by the hulls. The PVC core was bagged to the inner skins, and then faired with foam-sandwich longboards (oxide abrasives sprayed on) to minimize the amount of filler required later. Reinforcements for the outer skin were then impregnated and vacuum-bagged and applied over the foam core. Parts were again faired, and post-cured at 140°F (60°C) for 48 hours. 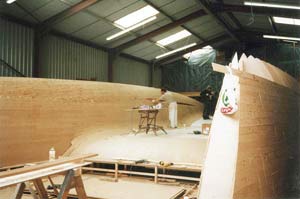 Impossible Dream was built over a male mold with carbon skins sandwiching a PVC foam core.

The boat’s build was reported in Reinforced Plastics magazine, which described the deck construction as follows: “The main wet deck was produced on a half male/female disposable mold made of a mixture of melamine-faced medium density fiberboard (MDF) and composite material. The canopy was such a complex shape that it required Multimarine to make a full plug and female molds to ensure it was as light as possible.” 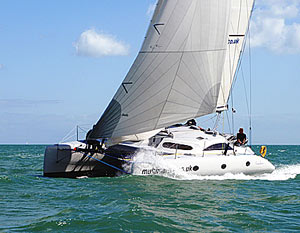 The Dazcat 1150 (38′) Drama Queen will compete in this summer’s Round Britain & Ireland Race.

Multimarine’s origins are in a company called Dazcat, formed by Darren “Daz” Newton in 1988. Newton grew up around South Devon, and engaged in all sorts of water sports—dinghy sailing, canoeing, surfing. At 15 he began racing a Hobie 16 and got hooked on multihulls. In 1987 he was building an F28 trimaran when it was severely damaged in a hurricane. Newton’s solution was to cut 2′ (61cm) off the damaged stern; two years later he won the Round the Isle of Wight Race with it. In a similar boat, Newton and a client competed in the 1994 Two-Handed Transatlantic Race. That same year Newton’s shop built a 35′ (10.7m) catamaran that took its owner around the world on a seven-year, 70,000-mile cruise.

Darren “Daz” Newton founded Multimarine Composites mainly to build custom boats of his own design, but the shop also builds designs of others. Addressing the needs of disabled persons became an unexpected market for the company.

In 1999 Newton diversified his activities, with Dazcat focusing on design services, and a new business entity, Multimarine Composites, building boats. Newton says nearly 90% of his clients are engineers or in the engineering profession, among them Dr. Tom Bligh, a descendant of the famous William Bligh, captain of the H.M.S. Bounty. Today, Newton builds to his own designs as well as to those of others.

About the Author: Dan Spurr is Professional BoatBuilder’s editor-at-large.