When the yard I managed became the dealer for a 30′ (9.1m) production powerboat, a colleague and I embarked on a passage from Chesapeake Bay to Bermuda to emphasize the boat’s seaworthiness. Having made the passage many times, I knew it wasn’t too risky even in the relatively small boat, as long as we chose a good weather window, and the vessel’s systems were sound and reliable. 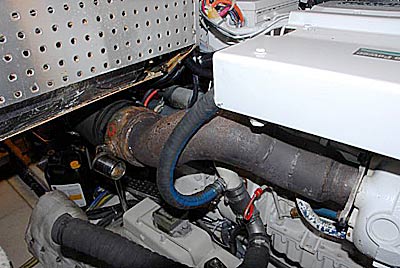 Insulation has been removed from the exhaust-elbow “riser,” revealing a clear violation of the principles of water-injected exhaust systems and the engine manufacturer’s guidelines. The riser lacks sufficient lift to prevent water from backfilling into the engine.

I found some minor defects one might expect on semi-production boats: inadequately supported hoses and wires, incompatible raw-water plumbing fittings, and the like. But I also found one detail that carried the potential for real disaster: the boat’s exhaust system was in gross violation of the engine manufacturer’s guidelines and, contrary to the laws of gravity, ran uphill from engine to muffler. Overall, the system looked good—neatly installed, secure, and of high-quality materials—but it was incorrect. 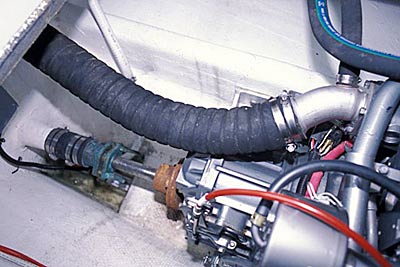 The original exhaust system in the author’s demo boat fails to provide enough rise and drop; and, the hose runs uphill to the muffler (not pictured). This installation would almost certainly have allowed water to enter the engine’s cylinders. 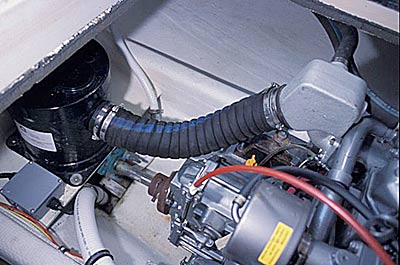 In the modified exhaust system, a riser from the engine manufacturer provided the height required for a continuous downhill drop to the newly installed waterlift muffler.

Many engines are installed partially or entirely below a boat’s resting waterline, leaving them vulnerable to seawater ingestion through the exhaust system and raw-water cooling intake. To prevent water from sloshing back via the exhaust manifold—when an engine is idling or at rest, while under sail, or in a twin-screw boat when operating on one engine—most engine manufacturers specify a minimum “drop” in the exhaust hose after water has been injected into the engine’s hot gas stream. The drop is usually a minimum of 12” (305mm), sometimes expressed in slope, as in ½” per foot (42mm per meter). The bottom of that drop typically ends in a waterlift muffler, specially designed for the application. Beyond the muffler there’s a specified “rise,” or hump, in the hose to further prevent backfilling from the water/exhaust port near the waterline.

An engine installation without a waterlift muffler and rise in the exhaust hose will almost certainly allow seawater to flow into the exhaust manifold, then proceed through open exhaust valves and eventually into the cylinders. The likely results of seawater-flooded cylinders? Engine stoppage, shattered pistons, bent connecting rods and valves, or permanent engine seizure. 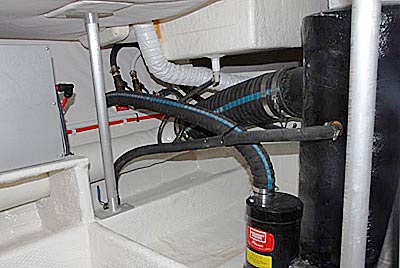 The hose section between a waterlift muffler and the overboard discharge is as critical as the riser design itself. The generator overboard-discharge loop shown here is too flat; the apex of the hose should rise nearly to the compartment overhead to make sure seawater cannot flow back to the muffler and engine.

Back to our like-new powerboat: even without looking at the engine manufacturer’s specific installation guidelines, I could see the system on the demo boat wasn’t adequate. After sending photographs and a drawing, I phoned the boatbuilder to discuss modifications to bring the installation into compliance. Instead of being embarrassed, he steadfastly defended the boat’s setup, saying, “That’s the way we’ve always done it.” (I refer to this disturbingly common response to corrective criticism as TTWWADI syndrome.) He also said that the installation had been inspected and approved by the engine dealer.

Lesson 1: Never assume that an installation is correct just because it’s new. Manufacturers of new gear—from complete boats and engines, to helm seats and resin—make mistakes, nearly all of which are honest and unintentional.

Lesson 2: Don’t take “No” for an answer if you know an installation is incorrect.  Although our demo’s builder brought in his engine dealer rep—who, likewise, assured me TTWWADI—I knew that the installation didn’t meet the manufacturer’s guidelines. If you’re confronted with a similar scenario, just do as I did: travel up the engine company’s chain of command. I took the case to my own regional representative for the manufacturer, and he agreed the installation was incorrect, although he also said there was little he could do about it. So I asked the boatbuilder if he would take responsibility for a drowned engine if the exhaust system was not corrected. He quickly made clear that he would not, and that as the boat dealer, I would be on the hook for the repair should the engine fail. 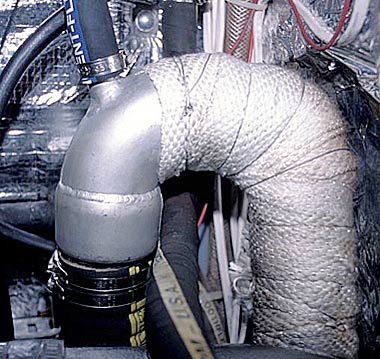 This properly designed custom riser lifts the exhaust high enough to ensure the required drop to a muffler.

Lesson 3: Always go to the source for accurate technical instructions or requirements. Resist the temptation to accept a verbal “Okay”—particularly from someone who has neither the authority nor the technical background to offer such an approval. Ask yourself: If it fails, what are the consequences? Who will take responsibility? How likely am I to hear “I never said that” from the person who vouchsafed the verbal okay?

After talking with the builder and the engine dealer-rep, I consulted the engine manufacturer’s official installation guidelines, which clearly spelled out in words and diagrams how a compliant exhaust system was to be installed. Any deviation leaves the installer responsible for a failure, regardless of engine or other equipment manufacturers’ warranty coverage.

Reputable marine-engine manufacturers provide explicit details regarding engine installation, which ensure that seawater stays on the correct side of the engine’s cooling and exhaust systems. An excellent graphic example is available from Alaska Diesel Electric, the well-known manufacturer of propulsion engines and generators, at http://www.northern-lights.com/media/PDFs/misc_pdfs/dont_drown_me.pdf.

Your attention to the details of the manufacturer’s exhaust system requirements is critical on any vessel you build, sell, or repair. Ignore “the book” at your peril: you might find yourself responsible for replacing an expensive engine or, worse, a vessel that founders because of an avoidable engine failure.

In my case, since the boatbuilder refused to step up, I, as the dealer, was left to correct the exhaust installation on my own before making what was ultimately an uneventful ocean passage.

About the Author: For many years a full-service yard manager and now a contributing editor of this magazine, Steve works with boat builders and owners and others in the industry as “Steve D’Antonio Marine Consulting Inc.” McGraw-Hill will soon publish his book on marine systems.