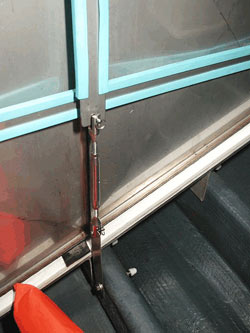 Heavy batteries and fuel tanks are systems components that you definitely don’t want coming adrift and slamming around in a boat on a rough day. Yet their attachments often range from the awkward to the dangerously inadequate. Here’s a look at two elegant solutions to securing these weighty components.

Fuel Tanks
The fuel tank hold-down on this Cranchi powerboat is perhaps the best I’ve seen on any boat under 100′ (30.4m). Multiple stainless steel straps, protected by flexible blue-plastic extrusions, span the tank fore-and-aft and athwartships. Unlike the soft rubber padding for tank straps I often find after it has torn and fallen to the bottom of the bilge in other boats, the Cranchi’s blue plastic material was quite tough, appeared to be nonabsorbent, and was unlikely to slip off the stainless straps.

Each securing strap terminated with a high-quality stainless steel turnbuckle, making adjustment easy. I’ve seen superb tank-securing straps completely compromised by inadequate attachments to the hull. A flattened plastic D-ring secured with two self-tapping screws is a common termination that won’t meet expected loads. On the Cranchi, turnbuckles were attached to sturdy stainless steel tangs through-bolted to the stringers beneath the tank. In contrast to the self-tappers described above, which were loaded in tension, these fasteners were loaded correctly in shear. Another classy detail: the end of each bolt was covered with a white plastic push-on cap, reducing the likelihood of cutting or scraping anyone working in the bilges.

It’s disturbingly common to see fuel tanks resting directly on top of longitudinal and transverse frames and protected from galling by just a thin strip of rubber glued to each frame’s cap. Once the padding is shucked out of position by the motion of the boat and tank, the tank begins to move around on the rough frame laminates, which gnaw into its bottom. Eventually there’s a fuel leak into the bilge. 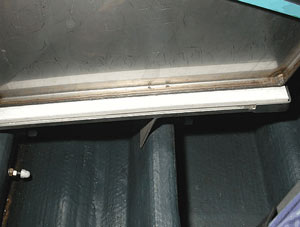 Instead of narrow bands of rubber padding, the Cranchi had a full sheet of white plastic material that appeared to be StarBoard or equivalent. Wide hard-rubber strips were placed between the tank bottom and the plastic. If the rubber slipped out of position, the tank bottom, though no longer padded, would still be fully supported by the StarBoard pan secured with proper cross-bolts to the frames under the tank. 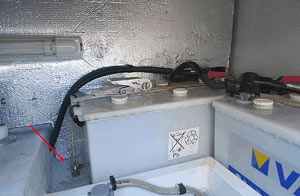 Batteries
Unlike fuel tanks, batteries are often removed from their boxes or trays each year for service or replacement. So, in addition to being securely held in position they must also be relatively simple to extract. Batteries on small boats don’t weigh too much, but 8-Ds for starting large diesels are hefty. Plastic straps and buckles are not up to the job, nor are the plastic foundation clips for securing the straps that come with most plastic battery boxes.

On this Fountain Pajot catamaran, ratcheting stainless steel tensioners on thick nylon straps do a fine job holding down the batteries; even so, the straps are easy to loosen when it’s time to remove the batteries, and easy to tighten during reinstallation. The strap attachment point (red arrow in photo, above) is a substantial forged stainless steel eyebolt backed by a large, extra-thick fender washer and an elastic stop nut. My only concern about the setup shown is that an installer could overtighten the straps and damage the battery case. Bent corner clips to spread the loads would make this smart setup even better.

About the Author: As “Bruce Pfund Special Projects LLC,” Bruce consults on composite processes and inspects marine composite structures. He is the technical editor of Professional BoatBuilder.