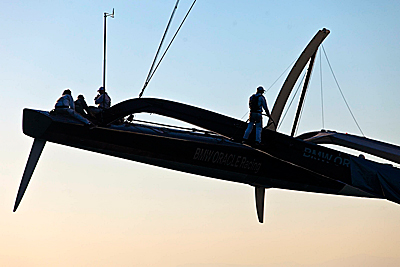 The helmsman on the 90’ (27.4 m) America’s Cup winner BMW Oracle is dwarfed by the curved daggerboard in the windward ama.

In March Professional BoatBuilder editor-at-large Dan Spurr visited with Pete Melvin, of Morrelli & Melvin Design & Engineering, in Huntington Beach, California. Melvin is an aerospace engineer by training and an accomplished racing sailor, with trophies that include two A-Class Catamaran world championships. We’ll publish more on the work of Morrelli & Melvin in an upcoming issue of the print magazine. Here, we present Melvin’s thoughts on the somewhat esoteric but timely topic of curved versus straight daggerboards in high-speed multihulls, including small cats, the ORMA 60 trimarans, and the big BMW Oracle tri and Alinghi cat that recently competed in the 2010 America’s Cup series in Valencia, Spain.

Professional BoatBuilder: When did we first see curved daggerboards? 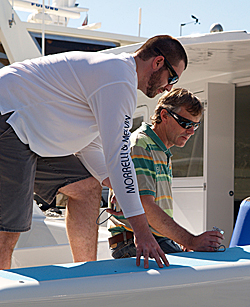 Pete Melvin: The first iteration of lifting foils on multihulls happened probably 30-40 years ago, when people began putting angled foils in boats, with some success. It’s never been a huge performance benefit. So it wasn’t very clear whether it’s beneficial or not. It looks good on paper because you’re getting some vertical lift.

PBB: Is there a way to measure the effectiveness of the angle? Or is it just feel?

PM: You need to create lateral force to resist the force on the rig—enough so that the foil operates efficiently with low drag and doesn’t produce a lot of leeway, and so your upwind VMG [velocity made good] is as good as possible. It’s fairly straightforward if the board is dead vertical, and you can calculate lift and drag and leeway angles. When you start angling something, you begin to get some spanwise flow on the foil, and you’re creating vertical lift. You’ve got to look at the vector sums of your side force and vertical force. If the board is straight up and down, then you get zero vertical force and all side force. And if the board is at 45°, then half of that force is vertical and half is side. 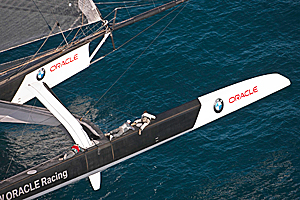 The curved foils first appeared in the 60′ [18.3m] trimarans. It was the French designer Marc Lombard who first put them in his designs. [Multihull designer Ian Farrier says he employed curved daggerboards on the F-27 prototype as early as 1985—Ed.] Some of the original ORMA 60 trimarans had just a daggerboard in the main hull, and no foils—other than rudders—in the floats. One problem with that configuration has always been that it’s a bit of a compromise upwind and downwind. To get the helm balance right for upwind, you need the daggerboard a bit farther aft; and when you put big gennakers up downwind, the center of effort of the sail plan shifts way forward, and you start getting leeward helm. That was one reason, among others, why those central daggerboards became angled, because you could raise them a bit and shift the center of effort forward. It was an improvement, but not a huge thing.

Marc came up with the idea of putting the boards in the floats so they would do two things. One is that they’d shift the center of effort forward to balance the helm sailing downwind; the other is to provide lift to the bow.

Eventually these boards in the floats became curved. The inward-curving foils kind of make sense because they don’t stick outside the boat. You also get more horizontal lift down low and less up top, which helps prevent ventilation; and, it’s a little cleaner exit where it comes out of the hull.

The boards began evolving, and other designers started using them as well. Over the years they refined that system on the ORMA 60s, and got more and more lift out of the boards. The boats began going faster and faster, because they were reducing drag. Once you get to a certain speed, depending on the kind of boat, the lift-to-drag ratio of the foil becomes better than the hull, so you want as much of the displacement as possible on the foil, lifting the hull out of the water. There’s a crossover speed; on an ORMA 60 it might be 15-18 knots. On the latest America’s Cup boats [the 90’/27.4m multihulls], it turned out to be much higher. Since the boats are much lighter for their length than the ORMA 60s—the hulls are longer and skinnier so there’s less resistance—the crossover speed ended up being 25-30 knots.

On the ORMA 60s the crew will retract the curved daggerboards in the foils going upwind, and use the center daggerboard. Going downwind they’ll pull the main daggerboard up halfway or whatever, and deploy the daggerboard in the leeward foil.

PBB: Because the apparent wind is always forward, wouldn’t the settings be the same upwind or down?

PM: Yes. The apparent wind is always forward of the beam. On an ORMA 60 it might be 50°-60°, sometimes closer. On the America’s Cup boats it was in the 20°-30° range downwind; it’s like going upwind in a normal boat. Downwind, you’re going faster, so it starts to pay off to use the vertical lift of the foils to reduce total hydrodynamic resistance.

PBB: So, off the wind you would pull the center daggerboard up?

They were also able to cant those foils. For upwind work they kept them near vertical, and for downwind they were canted.

PBB: They were curved boards?

PM: Yes. They were curved. They had two versions. In the final configuration, where they didn’t have a main hull daggerboard, one I call a J-foil is initially straight and then curves close to the tip; the other was a constant curve. The constant-curve ones were better for light-to-medium conditions, because upwind it wasn’t worth it to have that horizontal lift. The J-foils weren’t doing you any good; they were actually slowing you down a bit because of the extra wetted surface area and extra drag. So they used the constant curve for the light air, but once the wind got over 10 or 12 knots they went to the J-foils, and they’d get a several-knot improvement downwind. No real improvement upwind.

Alinghi [the A-Cup defender’s cat] was also trying a variety of foils. Originally they had some larger ones and then determined they didn’t need that much area in the foils, so they went smaller. They had a pair of straight ones and a pair of S-curves. I think they came to a similar conclusion that the straighter ones were better in light-to-medium conditions, and the ones with more curvature were better once the breeze picked up. The foils also help lift the bow downwind—a critical thing with multihulls, which not only reduces resistance but allows them to use more sail-power thrust, sort of a double benefit.

PBB: The drawings for your new F20 design has boards with constant curve, right? 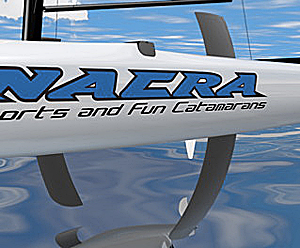 PM: Yes. Those are constant-curve foils. On a smaller boat, you don’t have the adjustability of the foils you have on the America’s Cup boats. The A-Cup multihulls were able to cant the foils with a very complex system. One of the nice things about the constant-curve foils is you put them in a curved trunk, so the level of complexity is the same as a standard daggerboard trunk.

PBB: On the F20, is any tackle necessary to raise the foil?

PM: No. You just do it by hand. You could have a string if you wanted, but most people prefer to do it by hand. The curved foils on the F20 lift the bows so you can push harder. We put a pretty big rig on that boat along with evolved hull shapes that are quite resistant to pitchpoling. Early reports are that the F20 is very fast downwind, very forgiving.

PBB: Dave McCollough, senior design engineer in your office, says that with the curved boards the boat actually, in a sense, becomes narrower.

PM: Yes. On a standard catamaran or trimaran your vertical displacement force is at the center of the leeward hull. When you put the curved foils in, they’re taking over a percentage of the displacement, inboard a little bit, so you’re losing some righting moment. That’s another reason for the J-foils: they give you lift without going so far in; sort of a second-order effect.

PBB: Wouldn’t it be nice to have a foil with a spine in it that you could adjust from curved to straight, as desired?

PBB: On Alinghi and BMW Oracle, how did they adjust the foils? With motors?

PM: On Oracle it was like a ball screw. Originally it was done with a furler drum that turned the worm gear to a winch.

PBB: Who on board would call for an adjustment?

PM: It was basically: upwind you wanted it vertical, and downwind if you wanted it canted all the way. There was a lot of testing to determine the optimum configuration. Once the racing started, they knew what they wanted. It’s not something you play as you go. It’s under such a high load….In the end they had a powered system.