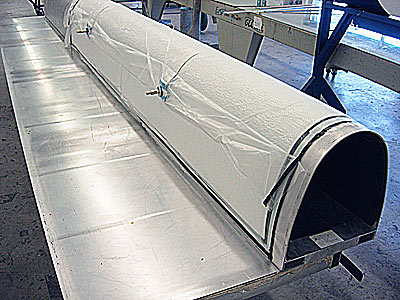 Carbon fiber pre-pregs are debulked on an aluminum mold of a mast’s forward cross section in Rondal’s composites shop. 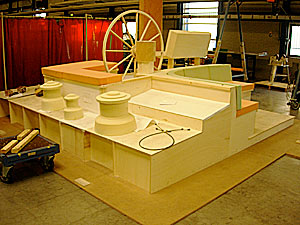 Everything about the Royal Huisman yard and attached Rondal fabrication shops in Vollenhove, The Netherlands, is clean and professional. And big. When a carload of Professional BoatBuilder staff landed there with little warning and a tight schedule last November, we were graciously received, but our only hope of seeing the entire 322,917-sq-ft (30,000m2) facility was to travel at a near gallop. We whisked by the bottle-fair hull of the 188.6′ (57.5m) Dubois-designed flybridge ketch Twizzle, then through cavernous humidity-controlled woodshops, and past: mockups of superyacht helm stations, racks of raw metal stock, mammoth custom stainless hardware, rows of composite hatch components, and squat black cylinders with attendant hydraulics of winches awaiting installation. 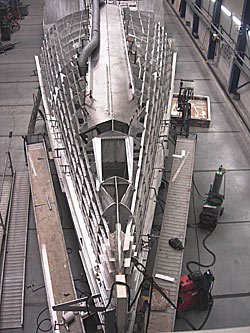 Rondal will be building carbon fiber spars well into 2011 for the 161′ (49m) Dykstra-designed aluminum ketch seen here at the beginning of bow construction.

We came to rest in Rondal’s composites shop for a discussion of carbon fiber spar construction with production manager Frank van de Velde and composites engineer Maurice Bijma. Their big projects at the time were the masts and booms for a traditional-styled 161′ (49m) aluminum ketch designed by Dykstra & Partners (Amsterdam). The hull, in build next door at Royal Huisman, had only just begun; van de Velde estimated his shop would have nearly a year of work ahead on the masts alone. Scheduled launch is in 2012.

Rondal spun off from Royal Huisman in 1975 to allow for design and construction of spars and deck equipment for other builders as well. Starting out in aluminum, the shop made its first carbon fiber booms in the mid-1990s, and by 1997 had invested in a 200′-long (61m) shed to fabricate the 164′ (50m) tapered carbon fiber mast for the Frers-designed, Huisman-built sloop Hyperion. 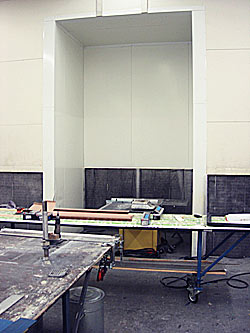 “Wolter Huisman decided if this owner wants a composite mast, we’ll build it ourselves,” van de Velde recalled. (Wolter H., who died in 2004, was the grandson of the yard’s founder.) Since then, Rondal has built 10 large carbon fiber masts, including one for Holland Jachtbouw, which, at a length of 202′ (61.5m), required the addition of a small alcove to the shop.

Looking at the Dykstra ketch on their drawing board, Bijma explained that engineering the rig got under way with basic comparative calculations of righting moments based on weights and load capacities of various rigging components, sail areas, and spar materials, followed by more stability calculations, lift angles, spreader length, and cost analysis. On this boat they settled on rod rigging with Kevlar backstays and carbon fiber masts, adding a triatic stay where jumpers were deemed inadequate to withstand the rig forces. All these changes had to be coordinated with classification society Germanischer Lloyd, which must approve final design, engineering, and materials choices before production begins.

The preliminary design stage had lasted from April through October of 2009. Starting in January 2010 production drawings were to become the main focus. Actual construction couldn’t happen until all the details were sorted out—around April, the two men predicted.

“It’s not the production that takes a year,” van de Velde said. “You want everything to be clear. You must be sure there are no changes once your production has started.”

These are not spars you can just screw a new fitting to, or hang a new block on where none was originally intended. Because all the running rigging is internal, sheave sizes must be specified before the mast is built, which means line diameters must be correct, which means sail and rigging loads must be finalized long before the mast’s build is begun. Four engineers work on the spars and the rest of the rig, specifying laminate schedules, thicknesses at various attachment and load points, and running finite element analysis on the designed parts. Van de Velde won’t commence work in the shop until at least 95% of the engineering is complete.

“The easiest part is building the mast,” he joked as he herded us from the office to the shop floor. 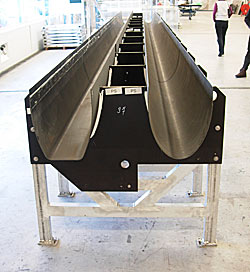 Prior to assembly, two halves of a carbon fiber spar’s inner shell rest side by side in a CNC-cut wood cradle.

The composites shop, where the two masts will be built simultaneously, is essentially a large oven: superinsulation and heaters can raise the temperature from 68°F (20°C) to 212°F (100°C) in 20 minutes. While we were there the room was at working, not curing, temperature; the two halves of the shell for a carbon fiber spar were laid out side by side in a CNC-cut wooden cradle. Van de Velde explained that the shell becomes the inner surface of the spar. It is built by end-joining sections of 3mm/0.1″ carbon fiber laminate (approximately 15 plies) that are laid up and cured on aluminum female molds about 8′ (2.4m) long, and formed as either the front or back cross-section of the spar.

Those front and back sections are fitted with spec’d internal conduits and rigging attachment points while they are open on the cradle. The next step is to invert the front section on top of the back, gluing them together—a tricky job with a 167′ (60m) mast that’s just 3mm thick. Once together and airtight, the shells serve as the base for the structural laminate layers of 90° and 45° pre-preg carbon fiber; these run the full length of the spar and are vacuum debulked after every two plies at the least. Alignment, van de Velde said, is essential. That’ll take some time. 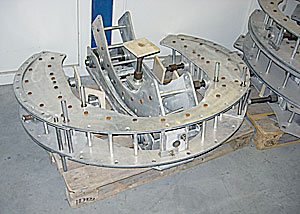 A crew of three or four works on each mast, which is held in a series of metal roller frames that enable the spar to be tipped while remaining perfectly straight. Debulk and cure cycles on the two spars are coordinated to save on heating and labor costs. Van de Velde said the wall thickness of the finished main mast for the Dykstra ketch will average 10mm (0.4″); the mizzen, 7mm (0.3″). The 20mm (0.8″) reinforcements at rigging attachments and pressure points will require as many as 60 plies of carbon fiber. Upon completion, each mast will be subjected to ultrasonic tests to provide a baseline for comparison should damage or fatigue be suspected in the future.

Add a couple of booms to the work list and it’s no wonder the spars will take nearly as long to build as the entire boat they will power.

About the Author: Aaron Porter is the managing editor of Professional BoatBuilder.