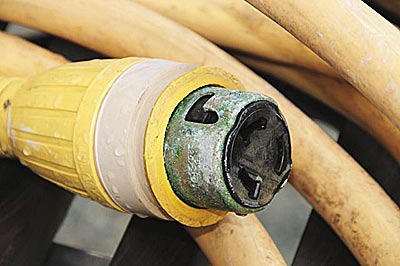 Aging shore-power cords riddled with corrosion and missing their threaded locking rings should be disposed of.

A survey conducted a few years ago indicated that 55% of all fires aboard recreational vessels are electrical in nature, and 11% of those begin in AC shore-power wiring and appliances. By contrast, only 8% are caused by fuel leaks and only 1% by galley stoves. An informal poll of my clients’ concerns about onboard fire risks nearly flip-flopped those percentages: most people are more worried about stoves and LP gas than about electricity, and shore power in particular.

In addition to the fire risks of shore-power connections, plugging into and unplugging from 110V electrical service around the water add the danger of potential electrocution. The combined risks make shore-power connections worthy of extreme care and attention to detail during installation, repair, and inspection.

Most electrical fires result from heat generated by excessive resistance in a circuit. Because the AC side of a vessel’s electrical system often carries much lower amperage than the DC side—just compare the spaghetti wires of AC to the hot-dog-sized conductors of DC—it has less potential for heat generation in the event of a fault. Still, that’s no reason to treat AC wiring with anything less than the highest respect. There should be no tolerance for substandard or non-ABYC compliance in the system.

On any boat, one of the key differences between AC shore power and the DC electrical system is permanence. The AC shore power is connected and disconnected hundreds or thousands of times in a boat’s life as the boat leaves and returns to a dock or marina slip, whereas the DC system remains essentially static, except for the occasional repair, upgrade, or battery replacement. Shore-power-related fires often begin with human error or departure from protocol rather than bad wiring. In many cases, boat owners, operators, or crew simply unplug the cord from the boat and/or dock without first de-energizing the loads on board. I see it happen regularly when I accompany clients on sea trials. In such a scenario, the plug acts as the switch, shutting down air-conditioning compressors, refrigerators, and battery chargers, among other high-current consumers drawing significant amperage relative to shore-power capacity. Each time a cord under load is disconnected, and often when it’s reconnected, an electrical arc occurs, resulting in pitting, corrosion (because the contact’s plating is damaged), and carbon deposits on the plug blades. With repetition, this routine increases the resistance of the connection, which in turn leads to heat generation. How many times have you seen boat owners, one of your customers, or perhaps yourself, follow this flawed shore-power practice? 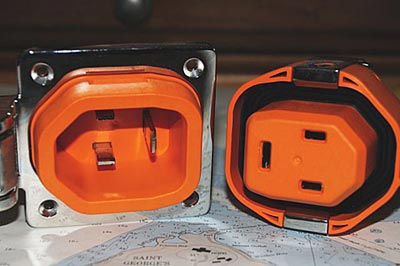 This SmartPlug shore-power connection is an innovative cord that reduces fire hazard by assuring a positive and locked electrical connection.

Another frequent cause of poor connections and heat generation in shore-power cords is a failure to secure the cord(s) to receptacles on the boat and the shore-power outlet with the attached locking ring. Although a virtually foolproof design is now available from a company called SmartPlug, the conventional shore-power cord relies on the combination of twist-lock plug blades and a locking-ring mechanism manually secured by the operator to achieve a secure mechanical and electrical connection. But, the system will still provide power, even if either or both mechanisms are ignored and the connection is compromised. Failure to secure the connection leaves it vulnerable as the cord and plug move with each tide, or passing wave, or boarding of the boat. As the unsecured plug works its way out of the receptacle, the contact area of the blades is reduced. If the loads are high—waterheater, air-conditioner, high-output charger, and the like—the surface area of the connection becomes inadequate to meet power demands, leading to overheating. As a builder or yard operator, you can’t make people secure their shore-power cords correctly, every time, once they leave your dock. But you can insist that customers have the right equipment to safely plug in anywhere they’re likely to tie up. At the most basic level: If a cord is missing its locking ring, then it shouldn’t be used. 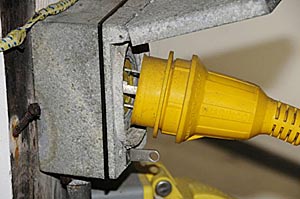 As this unsecured plug works its way out of the receptacle, the contact area of the blades conducting electricity from the shore-power outlet to onboard demands is reduced, which can lead to overheating and fire.

A final common shore-power fault results when the neutrals of a twin inlet shore-power system are paralleled. How often have you seen a shore-power plug whose male neutral blade or corresponding female receptacle is discolored, melted, or burned? You replaced the damaged cord or receptacle only to have the problem recur. That’s because the problem is the result of the neutral buses of the two systems having been inadvertently or intentionally connected somewhere on board—which causes the neutral blade of one or both cords, at one time or another, to exceed its designed amperage limit. To correct this potentially dangerous installation, the shore-power wiring aboard the boat must be changed to eliminate the cross connection. Until then, shore power is not safe to use. Your client should be advised of the situation in writing, and the cord ends tagged indicating that they should not be used—and why. 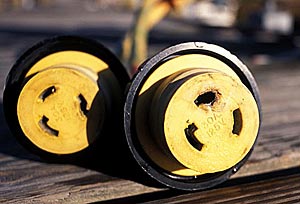 A scorched neutral plug blade or receptacle is frequently the result of the neutral buses of twin shore-power systems having been connected somewhere on board.

Perhaps the most insidious aspect of all these shore-power faults is a near-universal failure to trip the dock or onboard circuit-breakers. While short circuits cause excessive current flow, high resistance typically does not, so it will not trip a breaker. Because they are “downstream” of the current flow, breakers aboard the boat will never protect against faults in the shore receptacles or cords. Also, you can never rely on breakers to protect against a shore-power cord, plug, or receptacle overheating.

Because much of the risk in those cases comes from operator error that’s out of your direct control as a builder or service yard, the subject warrants serious customer education. I’ve encountered many boat owners and crew who firmly believe that circuit breakers will protect them against all shore-power faults. This is not the case, especially when adapters—such as those converting 50-amp dock service to 30-amp vessel cords—are in use.

So, once you’re sure their cords, receptacles, and onboard circuitry are sound, instruct owners and crew to follow these basic steps:

The rest is up to them.