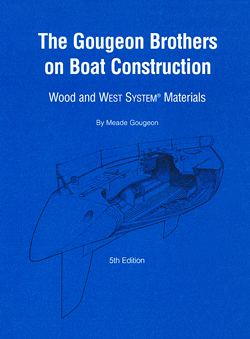 Meade Gougeon may have been the prime mover behind, and principal author of, The Gougeon Brothers on Boat Construction: Wood and WEST System Materials, but it wasn’t until the book’s fifth and most recent edition, released in late summer 2005, that he agreed to have his name appear on the cover as a bona fide byline. For Meade, this construction manual, and indeed, the company he co-founded and led—Gougeon Brothers Inc., based in Bay City, Michigan—has always been, in his words, “a team effort.”

GBI began as a boatshop, in 1969, and gradually morphed into a major epoxy-resin manufacturer, with an emphasis on the marine market. That evolution is described in detail in Professional BoatBuilder No. 125 (June/July 2010). Meade’s book, which we’ll refer to as TGBBC for short, was mentioned but not covered in that article. So let’s consider it now. Since it’s not exactly a new work, and since much of the trade is already aware of at least the existence of the book, let’s consider TGBBC in context—that is, the context of boatbuilding-related technical publishing over the same four decades. 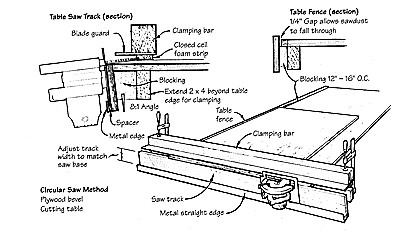 In 1970, as two of the three Gougeon brothers, Meade and Jan (Joel joined them a little later), were getting under way in their shop, International Marine Publishing Co. released a second edition of Robert M. Steward’s Boatbuilding Manual. That edition of Steward’s little book (6″ x 9″/15.2cm x 22.9cm, 220 pages with index) was a thoroughly revised version of the original, published 16 years earlier. Steward, a designer/engineer and, later, president at Huckins Yacht Corp., briefly presented other building media of the day—fiberglass, aluminum, steel, ferrocement—but his focus throughout was on wood construction. As such, his manual was highly regarded by veteran builders who were themselves highly regarded, among them Sonny Hodgdon of Hodgdon Brothers, East Boothbay, Maine; and John Gardner of Mystic Seaport Museum, Connecticut. Steward’s second edition quickly became the industry standard. (Maritime historian Howard Chapelle’s Boatbuilding was first published in 1942 and remains in print—but its text has never been updated.)

Note that epoxy adhesives were a relatively new arrival to boatbuilding, circa 1970, and not easily purchased, much less widely understood. Steward devoted one paragraph to epoxy. But mastering epoxy—as a means of producing durable, lightweight, wood structures with an absolute minimum of mechanical fasteners—was what the Gougeon shop was all about, right from the start. The brothers soon launched their own epoxy product line, selling their branded adhesive and sundries to other builders, professional and amateur alike. They named their line of adhesive materials and supplies WEST System. Eventually, sales of epoxy resins and ancillary gear exceeded boat orders, but the brothers continued to build boats nonetheless.

By 1973, the Gougeon shop had printed and copyrighted a pamphlet that was part product catalog, part photo exhibit of finished boats (the Gougeons’ and their customers’), and part description of methods of work utilizing WEST System materials. It was small and skinny—only about two-dozen pages in length—but it presaged the book, which Meade and his brothers, with input from their crew, commenced writing; they finished the first edition in ’79. In scope, general format, and physical size (8.5″ x 11″/21.6cm x 27.9cm, 316 pages with index), TGBBC stayed basically similar through subsequent editions. Its technical content, too, remained consistent, in that it reflected what the Gougeons—and the most talented of their trade customers—were learning and doing on the shop floor. Meade gave it a name: wood/epoxy construction, a term he would later enlarge to wood/epoxy composite construction with the incorporation of synthetic reinforcements. Just as important, TGBBC contained an emerging body of data generated by the Gougeons’ ongoing, shop-driven, epoxy adhesives research program.

Along with a handful of hot shops among their professional customer-base, the Gougeons were exploring the many different types of construction available to a builder working with epoxy. The method favored by professionals that amateurs often found daunting, especially with larger boats, is cold-molding. As epoxy evolved into an all-purpose adhesive of choice, the variations on a cold-molding theme included: aircraft-like stringer-and-frame construction, replete with lightening holes; or strip-planking as a substrate, over more-conventional framing; and/or the addition of foam coring; and/or fabric reinforcement as the final exterior surface, with or without the selective application of carbon fiber in highly stressed areas of the structure. 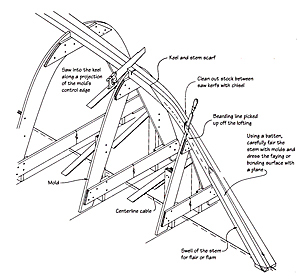 Figure 19-7 A set-up for a typical IOR racer. Control lines have been drawn on the stem. Notches are cut in the keel at the molds to determine bevels. The system is blocked up to allow the centerline cable to pass freely underneath.

As stated, the first edition of TGBBC came out at the close of the 1970s, a decade that saw a surge of interest, nationally and even internationally, in wooden boatbuilding, fueled in no small measure by the steady output of assorted print media of a technical bent, specifically: our sister magazine WoodenBoat, launched in ’74; Taunton Press’s Fine Woodworking magazine, launched in ’75; International Marine, publisher of a fast-growing book list; and National Fisherman, then a general-marine monthly, in newsprint, featuring the widely read column and how-to-build articles on classic small craft by John Gardner (an early fan of epoxy adhesive).

Collectively, these various enterprises, two of which (WB and FW) grew into multimedia operations, had enormous influence, and were not the only ones publishing print material of interest. The Apprenticeshop, an “experiential education” program teaching traditional boatbuilding skills, began in 1972, in Bath, Maine, and soon developed a sophisticated publications arm that helped market the program and its boats-for-sale. Nautical Quarterly, a lavishly illustrated hardcover magazine launched in ’77 (by a scion of the McGraw-Hill publishing empire), helped popularize and legitimize all manner of boatbuilding taking place beyond the pale of mass-market boating magazines of the time; in ’78, for example, NQ ran a lengthy article on the origins and development of cold-molding, featuring the Gougeon brothers’ boatshop in action.

Besides the first edition of TGBBC, 1979 marked International Marine’s publication of Modern Wooden Yacht Construction, a manual written by British sailor John Guzzwell, an itinerant boatbuilder with extensive experience in cold-molded construction. TGBBC’s second edition came along in ’82; the following year, Stanford (UK) Maritime Ltd released Cold-Molded and Strip-Planked Wood Boatbuilding, by Scottish naval architect/marine surveyor/builder Ian Nicolson. Together, these three books effectively surrounded the subject of cold-molding in its several permutations, up to that point. Steward acknowledged as much in the third edition of his own manual—published by International Marine in ’87. By then he’d expanded the entry on cold-molding, but only with a few more paragraphs, referring the reader instead to Gougeon, Guzzwell, and Nicolson. The latter two titles are well-prepared books with reliable content; each has since undergone another edition (as has Steward’s manual). 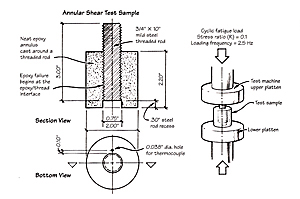 Figure C-4 Annular shear test—A threaded rod is subjected to repeated end loads while supported solely by a thick epoxy casing (annulus) that engages the threads. During each fatigue load cycle, the epoxy end must endure a multiplicity of acute stress concentrations at the thread peaks. These concentrations of stress become increasingly severe towards the recessed end of the rod near the annulus base. After some number of cycles, the epoxy test material either deforms or cracks until it can no longer sustain the steel post in the original position. The test is over when the post is displaced downward one-tenth of an inch. Various epoxy formulations can thus be ranked on the basis of how many cycles they can withstand at the standard peak load level, or on the basis of the magnitude of the peak load which is required to produce failure after a standard number of cycles.

Though additional titles on cold-molding have been published since, TGBBC remains the most comprehensive, authoritative, and copiously illustrated of the pack. Irrespective of one’s pro or amateur status as a builder, visuals are key to following what’s being said in the text. To that end, longtime Gougeon staffer Mike Barker’s excellent freehand drawings of construction and technical details enhance the later editions, augmenting plenty of shop photos and what used to be called mechanical, or engineering, drawings rendered in 2D, plus perspective drawings of critical construction techniques. Barker is credited with designing the fifth edition.

Note that TGBBC has always been self-published; meaning, Gougeon Brothers Inc. is its own imprint. Which explains why “WEST System” appears upfront in the subtitle, and the WEST product line is openly discussed within. I said discussed—as distinct from hawked; there really is no shameless commercialism here.

For the fifth edition, TGBBC has grown by about 33% in overall content to 406 pages with index—a jump in page count that occurred only with the fifth. Meade writes in his preface: “To make [TGBBC] a richer resource for the 21st century reader, we have chosen to revise, reorganize, and update the book, but not to rewrite it. To edit out less popular construction methods…or replace fundamental building disciplines such as lofting…would rob the reader of choices. While, after 25 years, the book includes some things we would no longer do, this information provides a historical perspective on how ‘modern’ wood/epoxy construction evolved, and potential techniques that could still be of interest to current builders.”

He goes on to say that, “for clarity,” the fifth edition was recast into six major sections, as follows:

Fully a quarter-century ago, when TGBBC first appeared, what may have seemed to some, maybe many, professionals at the time to be fringe boatbuilding, is now mainstream: the new normal. Wood/epoxy construction has long since been validated on the race course (power and sail), in cruising venues around the world, and most importantly, in the marketplace—with projects great and small. In recent years, Sonny Hodgdon’s son Tim, a fifth-generation boatbuilder, demonstrated the strength of wood/epoxy composite construction with such impressive large-scale projects as the King-designed sailing yachts Antonisa and Scheherazade, at 125′/37.8m and 155′/47.2m, respectively. (See PBB No. 63, page 70; and PBB No. 86, page 88.)

For those of you still unacquainted with TGBBC, you owe it to yourselves—regardless of the building medium you work in—to take a close look at Meade’s fifth edition. Consider it…definitive.