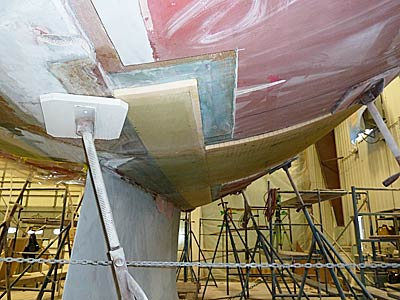 The bottom of a 57’ (17.4m) yawl is halfway through a complex core and outer skin replacement at the Morris Yachts service yard in Bass Harbor, Maine.

As new-boat sales fell sharply during the early days of the current recession, production builders scrambled for cover. Some downsized; others looked to more-thriving markets such as alternative energy; and those with service and storage yards leaned heavily on their maintenance and repair business. That last strategy has proved an effective way for many yards to keep revenue flowing, and to hold onto skilled staff who would be hard to replace once the economy recovers.

While sales of new boats continued to fall in 2009, the boat service sector grew by $6.3 billion and used-boat sales improved, according to recreational boating statistics from the National Marine Manufacturers Association. Although the production shop at Morris Yachts in Trenton, Maine, has a welcome boost in orders—including a series of 44′ (13.4m) training sailboats for the U.S. Coast Guard Academy—Morris is by no means back to pre-recession levels. So management is meeting the new reality by expanding operations in its service yards in Bass Harbor and Northeast Harbor.

On the marketing side, Morris has hosted open houses at its service yards, drawing in experienced yachtsmen who know there’s more to owning a boat than the thrill of a new build and the ceremony of launch day. Time passes and things go wrong; Morris is selling solutions for that less-glamorous eventuality even as the company continues to promote its new sailing models. 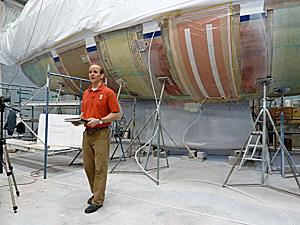 Service Manager Chris Murray explains the core repair of the hull behind him, seen in different stages of completion.

Service manager Chris Murray confirmed that Morris is becoming more diversified. He recounted how Morris increased storage and service capacity in the early 1990s with the purchase of the Bass Harbor site. Morris now stores more than 130 boats, and services a steady stream of transient yachts that travel through the storied cruising grounds of the eastern Maine coast. But, on top of the routine maintenance of storage, and the complexity of troubleshooting yachts on the water, Murray said the yard is focusing on ambitious rebuilds and restorations.

During a recent visit, for instance, the first thing I saw in the shop was Encantada, a beautifully restored mid-1960s-era Hinckley Pilot 35′ (10.6m) sloop, shining with flawless new paint and varnish. The heavily built single-skin fiberglass hull should have many years to go. In the adjacent bay was a 57′ (17.4m) yawl built in 1994 of vinyl ester resin and PVC foam core with Kevlar and fiberglass laminates. Murray introduced the yawl as an example of the increasingly common phenomenon of water intrusion in foam- or balsa-cored hulls. 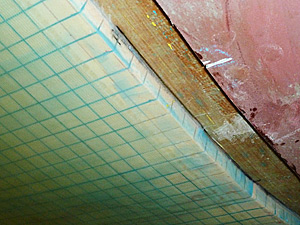 The kerfs in the newly infused foam core are full of resin, ensuring that any water penetrations—from a grounding, say—of inner or outer skins remain localized.

Morris engineer Peter Smith noted that as cored hulls age, the chances of wet core increase. “These issues are becoming more prevalent in this vintage of boat,” he said. So, the Morris service yard is gearing up with crew and techniques to routinely test for wet core and to perform what can be dramatic core repairs.

Glendon Stanley, a composites and paint specialist at Morris, explained that the structural core of the yawl now before us in the shop had suffered from water intrusion most likely as the result of multiple groundings. Whatever the cause, water ran freely through open kerfs in the core, traveling the length of the hull and contributing to portions of the outer skin delaminating from the core. Stanley said that, initially, a marine surveyor with a thermal-imaging camera revealed water in the hull and in areas where core kerfs were open. Armed with that information, the yard crew drilled into the hull and found blackening in the kerfs where water had flowed. Morris’s crew has repaired other wet-core projects—including one contaminated with diesel fuel from an integral tank—by flushing and drying the affected core, and then infusing the kerfs with low-viscosity resin. 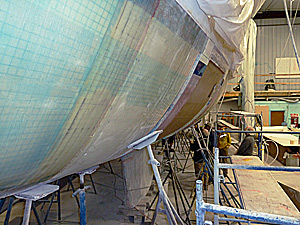 In this view looking aft along the hull, the core in the bow sections has been infused, and most of the outer skin replaced.

In the example yawl, tests indicated that all the core below the waterline should be replaced. Working in sections, the crew had stripped the outer skin, removed damaged core, and cleaned up the inner skin before laying a ply of 1708 fiberglass cloth impregnated with epoxy resin over the exposed Kevlar. The crew then vacuum-bagged new Divinycell H-130 closed-cell foam core (H-200 in way of the keel) into a layer of epoxy adhesive. Next, they infused the core panels to fill the kerfs with 170-centipoise resin, followed by six plies of fiberglass outer skin. Once all sections of the bottom are completed to that stage, two final plies of fiberglass will be applied over the entire hull before fairing and painting. During the restoration, the skeg-hung rudder will be exchanged for a spade rudder.

And the cost-effectiveness of such an extensive repair? Murray said the question should be answered on a case-by-case basis. For this yawl, with a potential value in excess of $1 million, the answer is yes. With about 50% of the job complete, he estimated 600 man-hours had been expended so far. It will be expensive. On the other hand, he said, “No one’s going to buy a wet boat.”

That simple truth accounts for a new repair specialty we can expect at more and more service yards.

(For a detailed case study of a major wet-boat repair, see “Water Everywhere” in Professional BoatBuilder No. 126, the August/September 2010 print edition, delivered to subscribers in mid-July.)