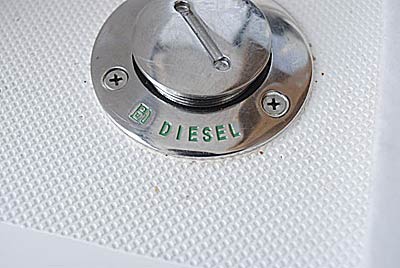 Granted, diesel fuel is less volatile than gasoline. Still, plumbing systems for delivering either type of fuel to its tank must be installed so as to prevent leaks and minimize the possibility of fire.

The fuel line between the deck fill and the tank—usually a flexible rubber hose, or a combination of hose and pipe—must be U.S. Coast Guard–approved fuel line. In addition to the manufacturer and date of manufacture, the hose should be clearly labeled every 12″ (304mm) as to its purpose: Type A1, A1-15, or Type A2 for gasoline systems; and B1, B1-15, or B2 for diesel systems. If a foot of hose is visible without such markings anywhere on it, you should question the hose’s rating and its safe use.

While inspecting boats, I’ve seen a variety of inappropriate hose materials—from clear PVC to raw-water hose—installed as fuel fills. It’s often difficult to get access to a fill hose and to inspect its full length from the deck fill to the tank. After the struggle to do so, I frequently find hoses badly deteriorated and sometimes leaking.

Ready access to those components for inspection and maintenance is a criterion clearly spelled out in American Boat & Yacht Council standards: H-24, Gasoline Fuel Systems; and H-33, Diesel Fuel Systems. Having to open a hatch or remove panels with a screwdriver or wrench is reasonable and compliant; what is not, is an installation whose disassembly requires a saw or anything more than common hand tools.

While the service life of flexible hose varies with quality of manufacture, materials, and environment, replacement is inevitable. I’ve inspected new boats just months off the assembly line with fuel-fill hoses already cracked. (This type of failure often first appears at the outer radius of a hose bend. Close inspection might require a mirror and flashlight.) 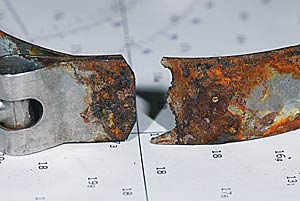 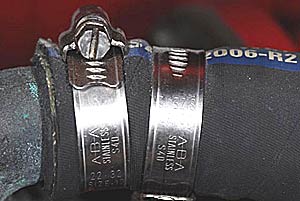 Rigid metallic pipe in fuel-fill systems must be Schedule 40 or heavier. Make each connection between hose and pipe, or hose and tank, with double hose clamps.  Because the rigid hose common to fuel systems often requires considerable compression for a liquid-tight seal, I prefer hose clamps with a solid band at least ½″ (12mm) wide and with embossed rather than perforated threads; and, the first clamp installed a minimum of ¼″ (6mm) from the end of the hose. Alternatively, T-bolt clamps are effective. I prefer the mechanically assembled models to those that are spot-welded, because the welds are vulnerable to crevice corrosion failure that often occurs when bedding beneath a deck fill fails, allowing water to run down the hose and over the clamp. It’s important to properly size all clamps so they tighten snuggly against the outside diameter of the hose. It’s also vital that the spud, or pipe-to-hose adapter, that receives the hose clamps can accommodate two of them. I’ve seen many installations where the letter of the law has been met with two clamps over a fitting that has room for only one; the result is that the second clamp damages the hose. 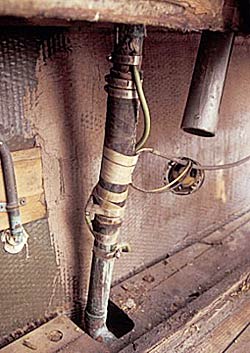 On a boat in the shop for re-powering, this concealed fuel-fill plumbing now reveals a host of flaws:

So: Do your fuel-fill installations and those of your customers comply?