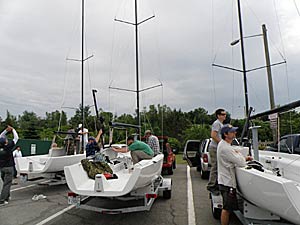 Just a few years ago the most frequent complaint among boatbuilders was the scarcity of good experienced workers and reasonably skilled entry-level employees. Most builders would happily trade their current woes for that work-force problem. At the time, a number of education and training efforts were spurred on by the cry for new workers. When the economy went south, the schools that had ramped up to meet the demand didn’t shut their doors. Indeed, as almost anyone will tell you, a recession’s a poor time to look for a job and a fine time to be in school. Many of the better-known marine-sector institutions of higher learning have grown their programs and increased enrollment since 2008.

This is the time of year when the schools’ graduates launch the boats they’ve been building, and head off into the job market, or, in some cases, decide that another year of marine training is a good option. Just looking at a few schools in New England, there’s reason to believe that a number of better-educated workers will be waiting for opportunities when the market for boats returns—as long as it doesn’t take too long. 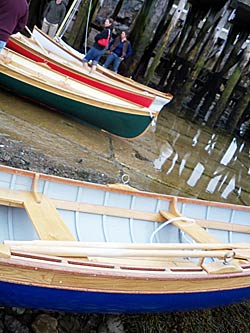 Courtesy of The Boat School

Starting as far east as this country goes, The Boat School—now part of Husson University—in Eastport, Maine, graduated its 41st class on May 8. Eleven first-year students, who concentrate on wooden boatbuilding, launched three of the fine Whitehall rowing craft that have become a signature of the school’s program. Two more Whitehalls, including one with a sailing rig, were built by second-year students. Students in the school’s composites program launched a 16′ (4.8m) Carolina catboat. The hull is hand-laid fiberglass; its rudder and centerboard are infused, cored composites. 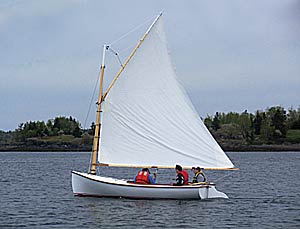 Courtesy of The Boat School

With most of the first-year students returning for a second year, and 20 incoming boatbuilding students on tap for next year, the school is poised for growth. In addition, a marine systems program is scheduled to start in the fall; and last January, The Boat School added the Westlawn Institute of Marine Technology to its campus when the small-craft design correspondence school moved its offices from Mystic Seaport, in Connecticut, to Eastport. 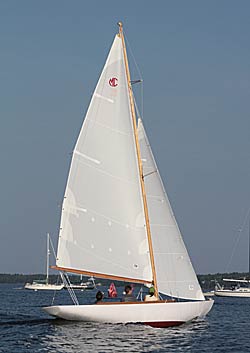 In Rockland, Maine, The Apprenticeshop, which concentrates on traditional wood construction in a more self-directed two-year program, launched a couple of classic daysailers on June 18. The 16 apprentices had finished an elegant 23′ (7m) Farnham Butler–designed Mermaid-class sloop and a complete rebuild of a 31′6″ (9.6m) Haj sloop, originally brought over from Finland in the early 1930s to be part of a club racing fleet. 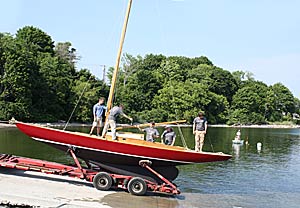 Program director Eric Stockinger said the school’s limited enrollment program has seen increased demand in the past two years. With four apprentice vacancies three times per year, he said he’s had no trouble filling the positions months in advance. While job placement of his graduates with specialized traditional boatbuilders isn’t as good as it was a few years ago, it nevertheless remains strong. 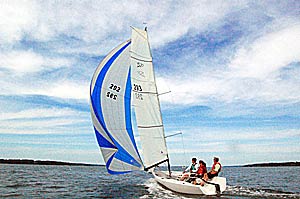 At The Landing School in Arundel, Maine, students launched two new boat models built over the past year. The school, whose certificate program includes design, marine systems, and construction in composites and wood, graduated 80 this month, 23 of whom will be returning for a second year of study toward an associate’s degree being offered for the first time. The new boats include the LS-20, a light-displacement 21′9″ (6.6m) trailerable keelboat for racing and daysailing. Building the boat provides training for composites students in hand layup, infusion, foam cores, and carbon fiber and E-glass pre-pregs. 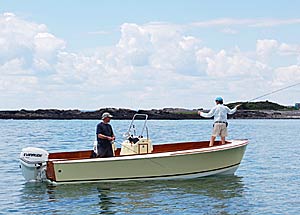 Three were built this year; and program enrollment might demand four boats next year. The school also launched three new Van Dam–designed Flyfisher 22s (6.7m) built in wood composite. That sturdy and steady platform was designed with the school’s students, and outboard-powered saltwater flyfishing, in mind.

The Landing School projects an enrollment of about 88 next fall, and while job placement for graduates has been down since 2008, it’s increasing again—especially for composites graduates with experience they can easily apply to multiple sectors, including alternative energy. That said, the school has no intention of shifting its focus away from boats. 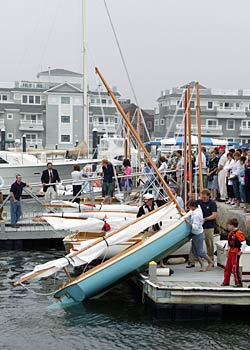 In Newport, Rhode Island, the International Yacht Restoration School—less cumbersomely known as IYRS (pronounced “iris”)—launched a flotilla of boats and 21 graduates on June 5. Eighteen graduated from the school’s boatbuilding and restoration program, which emphasizes traditional wood construction, documentation of classic vessels, and accurate restoration. Students this year had restored a Herreshoff 12½ (3.8m), a 20′ (6m) Gar Wood runabout, a 15′6″ (4.7m) Chris-Craft runabout, and a fleet of 12′ (3.7m) Beetle Cats. 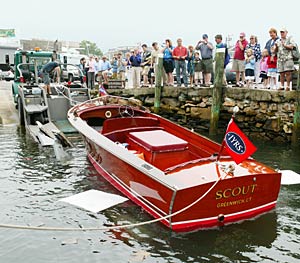 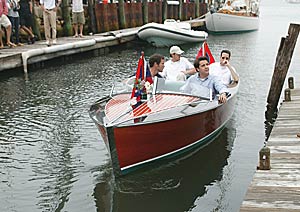 The other 13 graduates were from the school’s marine systems program, which was developed before the economic downturn to fill jobs at boat shops and plants and service yards looking for systems technicians. In spite of the economy, the program is thriving: the school is expanding again this year with a composites program to be headed by veteran boatbuilder Henry Elliot. That program promises a fleet of new hydrofoil Moth dinghies next summer, and a cohort of composites technicians for the region’s advanced-composite boat and spar builders.