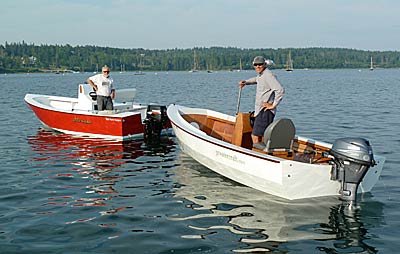 Graham Byrnes (left) in Marissa and Russell Brown in the PT Skiff compare design and performance of their boats during a visit to Professional BoatBuilder’s waterfront last week.

This scorching first week of July, we at Professional BoatBuilder were lucky to have some business to attend to on the water. Two boats built to designs from our 2009 Design Challenge for efficient powerboats were at our waterfront. Graham Byrnes of B&B Yacht Designs had his wood-category winner Eco 18, Marissa, here while he teaches building and design at WoodenBoat School for a couple of weeks. Russell and Ashlyn Brown of PT Watercraft  trailered their 18′5″ (5.6m) kit-built PT Skiff from their home in Port Townsend, Washington. Eric Jolley of Bieker Boats, which designed the skiff for Russell Brown, entered it in our competition.

Driving the boats and watching them run for a couple of days, I found that Bieker and Byrnes had taken markedly different approaches to meeting the strict parameters of the Design Challenge, which called for a boat between 16′6″ and 18′6″ (5m and 5.6m) powered by 25 hp or less, cruising at 15 knots, burning less than 2 gallons (7.5 l) per hour, with a trailerable weight of 2,700 lbs (1,125 kg). Both boats have fine entries and relatively high topsides, which give them generous seakeeping abilities for such small, light craft; and both boats are plywood/epoxy construction. After that, the similarities end. Watching the video you can see a bit of what we felt under way. 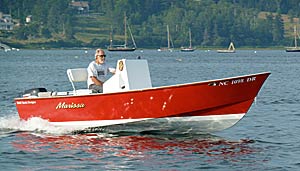 Marissa at speed. Note her sharp forefoot and wide chine flats riding just at the surface of the water. 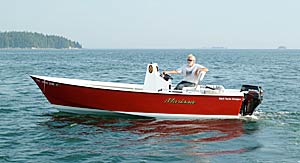 Marissa is a big-feeling little boat that hops up quickly to plane on her low deadrise aft sections. Her wide chine flats keep her stable. She banks very little in corners, a sensation that’s a bit foreign to boaters like me who are used to round bilges. The helm station is up high, providing fine visibility. Through good design and careful construction, Byrnes has been able to provide the feel and performance of a good modern V-bottomed runabout, but at a fraction of the weight, horsepower, and fuel consumption. In a departure from the Challenge parameters, Byrnes had recently powered Marissa with a 30-hp Suzuki, but hadn’t had time to tune it or the prop for optimal performance. Marissa ran very evenly with the PT Skiff powered by a 20-hp Yamaha. Both boats with two adults on board cruised comfortably at 20 knots, well above the Challenge’s 15-knot parameter. 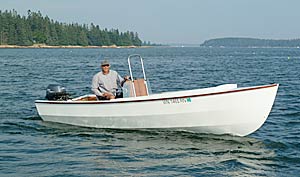 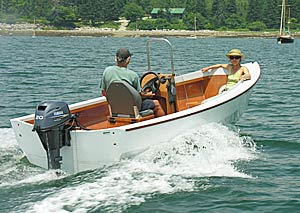 The PT Skiff comes from a design team known for performance sailboats. Her water ballast, shallow skeg aft, and relatively round sections in spite of her multichine construction, reflect that heritage. The skiff feels great to monohull sailors, but lacks the initial stability a Boston Whaler owner might be accustomed to. It also lacks the bone-shaking hard ride of a flatter boat. Indeed, it’s in rough conditions that this boat shines. With very comfortable seating for passengers forward; a center-console that puts the helmsman perfectly in control and with good visibility over the relatively high bow; watertight storage compartments; and turn-of-a-valve ability to take on 40 gal (140 l) of water ballast in a bilge tank, the skiff is ready for some nasty chop. And if things get really rough, throttle back, and she’s equally well mannered at displacement speeds. In the video, you can see how the PT Skiff eases onto a plane almost imperceptibly as the easily driven hull picks up speed. She tracks beautifully, banks in corners, and remains sure-footed with her skeg in the water. 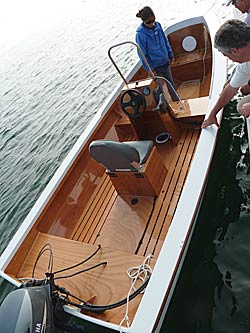 Another advantage to plywood and epoxy construction is the warm wood finish possible in the interior.

Both boats are built in wood and epoxy from CNC-cut marine plywood and fiberglass. Running the boats hard I was reminded of the amazing strength and light weight of that construction. Russell Brown, who works in advanced composites—including building carbon fiber and wood structures for BMW Oracle’s winning America’s Cup effort—said he doesn’t think the PT Skiff could be practically built stronger and lighter with any other materials.

Plans for the Eco 18 are available from Byrnes’s Web site. The PT Skiff comes as a complete kit from the PT Watercraft site for $5,680. An able amateur woodworker could build either boat, fully rigged and powered, for between $10,000 and $15,000. Now that’s affordable boating.

The visit from these two boats was a gratifying confirmation that the Design Challenge, which drew 73 submissions from 16 countries, had succeeded in spurring imaginative and practical thinking about affordable, safe boats that the middle class could aspire to own and enjoy, even in a soft economy. I know there are other Design Challenge boats being built out there. If you’re building one, send photos and performance reports. Or, even better, stop by Brooklin, Maine, and we’ll put them through their paces.

Results from our second Design Challenge for larger efficient powerboat designs are pending as the judges study a few final details and weight calculations. Stay tuned.