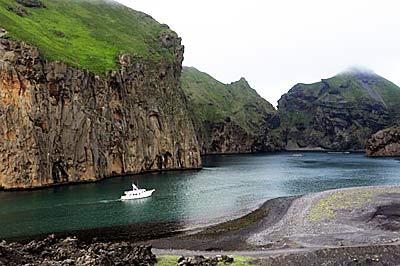 The author made port in the Faroe Islands having avoided a potential hydraulic failure by replacing a broken raw-water pump on the passage from Scotland. Carrying the correct spare parts is essential when voyaging to such remote destinations.

Since my first bluewater passage aboard the 120′ (36.5m) steel schooner R/V Westward nearly 25 years ago as a student, I’ve developed a strong appreciation for what’s involved in maintaining a boat on any voyage where support and resources are limited. On that well-found boat, from Cape Cod to the Grenadines and the British Virgin Islands, we performed routine maintenance and numerous repairs. Westward was a relatively unsophisticated boat: saltwater showers, no air-conditioning, and lots of original equipment, including the pneumatic-start diesel, dating to her 1961 construction by Abeking and Rasmussen. Navigation was primarily by compass, paper charts, and sextant with LORAN when in range. But even those simple systems demanded regular attention and racks of spare parts to assure operation offshore.

To prepare any boat for passagemaking you must have a thorough understanding the vessel’s systems and how they operate, which includes knowledge of the spare parts you are most likely to need, and how to use them. Many boat owners and operators overlook the latter. Those of us who build, repair, or outfit boats are in a good position to alert owners and operators to systems that, should they fail, often lead to more serious issues: loss of control, propulsion, or flotation. Such assistance in preparing for offshore passages is a service most owners need whether they know it or not.

I recently completed a month-long passage from Scotland to Iceland via the Faroe Islands aboard a 65′ (19.8m) cruising motoryacht. It was built to the highest standards, and I was more than confident in her seaworthiness and systems installations.

A few hours after departing Stornoway, Scotland, however, an alarm sounded: the temperature of the hydraulic oil for the vessel’s stabilizers was rising, and while it was not yet critical, all eyes were on the gauge. It continued to rise, and we eventually sought shelter in the lee of the Butt of Lewis to effect repairs. We discovered that the raw-water cooling pump impeller, which cooled the hydraulic fluid, had not just failed, but its remnants had melted to the interior of the pump. 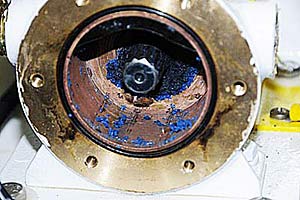 The remains of the failed raw-water pump impeller had melted and fouled the interior workings of the pump.

Disassembling and cleaning the pump would have taken too much of the rare good weather we were having, and we didn’t relish the prospect of a 24-hour passage in the rough North Atlantic without working stabilizers. Because the boat was well prepared and we knew its systems thoroughly, we installed a spare pump and continued on our way.

Once the sole domain of large yachts and commercial or military vessels, hydraulic systems are now found on increasingly smaller cruising vessels. They actuate and control not only stabilizers, but also thrusters, windlasses, cranes, winches, and steering systems, among other gear. While initially more costly than similar electric gear, hydraulic equipment is known for its reliability and strength even in the harsh marine environment. Hydraulic thrusters, for instance, typically offer a 100% duty cycle, something that cannot be said of their electrically powered brethren.

A potential liability for hydraulic systems, however, and one I faced in the story related here, is the “live” nature of hydraulic pumps on most small and intermediate installations. Meaning, the hydraulic pump, typically powered by a gear-driven power takeoff located on the transmission or the engine itself, is always turning regardless of whether it’s doing any work. As long as the engine is running, the pump is pumping fluid, even if only recirculating; and it’s generating heat that must be dissipated. How long it might take to overheat without cooling water depends on a variety of factors. Once the fluid overheats, hydraulic-pump seizure is a real possibility; and, with a live pump, seizure nearly always damages components, possibly those in the engine or transmission.

Of more immediate concern is what happens if hydraulic fluid is lost, when a hose fails, for example. The pump immediately loses lubrication, which leads to rapid heat generation and eventual seizure. That, in turn, causes gear and shaft shearing, possibly stopping the engine—or, at the very least, halting propulsion if the transmission is damaged. In my experience, few boat owners or even professional skippers realize that a failed raw-water pump can lead so quickly to loss of propulsion. 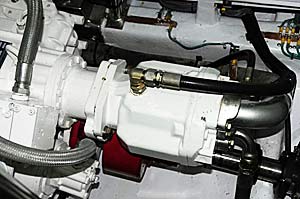 A large hydraulic pump bolted directly to a transmission PTO.

Remember: Those scenarios involve gear-driven live hydraulic pumps that are bolted to the engine or transmission and lack a clutch. That accounts for pumps on most of today’s small systems, and many moderately sized systems for which no clutch assembly is available, or where space (or budget) prohibits a clutch PTO. Also note that where twin pumps are used—one on each engine in a paralleled system, the most common arrangement—fluid loss will similarly affect both pumps. 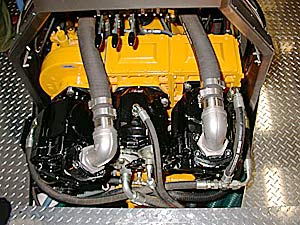 The immediate and temporary solution to such a problem is not complex. If you lose hydraulic-fluid cooling water, first the take hydraulic equipment off-line (many systems will do that automatically when an overheat alarm sounds), and slow down. Lower load means less heat generation in the system; and the slower the engine turns, the less fluid is pumped, generating less heat. Once the hydraulic pump loses all fluid and lubrication, its life can be measured in minutes if not seconds. If the boat is to continue on, the only solution is to remove the hydraulic pump from the PTO on the engine or transmission. To prepare for that eventuality, fashion a metallic blanking plate that installs over the orifice exposed on an engine and some transmissions when a pump is removed. The plate keeps oil in and dust, dirt, and debris out of the engine’s lubricated components. If you can easily separate the pump from the PTO adapter, then no blanking plate is needed.

As a boatbuilder, boatyard, equipment installer, or service technician, you should educate your clients about this vulnerable detail of live hydraulic pumps. The solution, as explained, is relatively straightforward, but knowledge and some minor material preparation are essential to avoid propulsion failure.