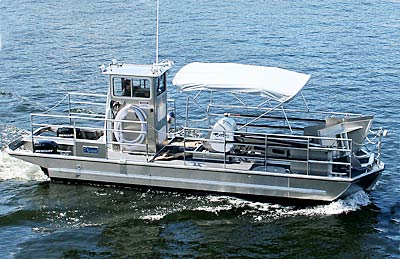 Kvichak Marine in Seattle, Washington, started building 30 units of its 30′ (9.2m) Rapid Response Oil Skimmer early this summer to help clean up the Gulf oil spill, and more orders are on the way. 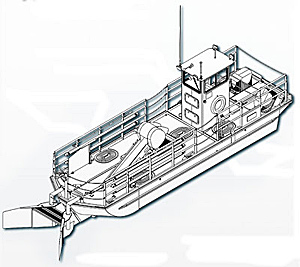 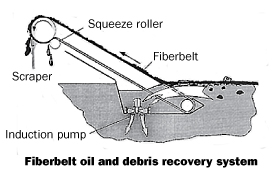 Here’s how the Kvichak/MARCO Filterbelt works: The Filterbelt—roughly 8′ long x 1′, 3′, or 4′ wide (2.4m x 0.3m, 0.9m, or 1.2m)—rolls over two rollers like the belt on a belt sander. It is lowered through a well in the hull, with one end in the water and the other over a tank (see illustration). A powerful induction pump underneath the submerged part of the belt draws oil and water toward the belt. Water passes through, but the oil doesn’t; it travels up the belt to a squeeze roller (like on an old wringer washing machine) and scraper that remove the oil, which falls into a sump. Kvichak says “free-water recovery proportions” are less than 10%, meaning: recovered oil and debris constitute more than 90% of the tank’s contents. 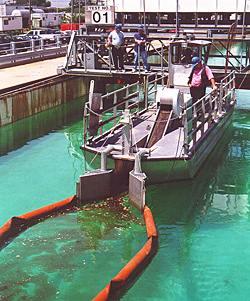 Floating oil is contained in booms and drawn to the conveyor belt by a powerful induction pump. On the belt, oil is separated from the water, and drops into a sump, while the water passes overboard.

MARCO was a longtime Seattle boatbuilder that ceased operations in 2005; in fact, Kvichak’s first builds were gillnetters constructed on jigs purchased from MARCO in the 1980s (see Professional BoatBuilder No. 96 for a profile of Kvichak). Reid explains their relationship: “The Filterbelt system was developed by MARCO Pollution Control, and we [Kvichak Marine] partnered with them for many years constructing skimming vessels utilizing this spill cleanup technology. Kvichak purchased the MARCO Pollution Control division in 2005. MARCO Global is still very much in operation, and a major subcontractor partner with us on this project.”

It has been a busy year for Kvichak. In addition to the skimmers, last January it announced the delivery of a third ferry to San Francisco, and a fourth in April; orders for three 75′ (23m) pilot boats headed to The Netherlands; and delivery of a 44′ (13m) Response Boat–Medium-C to the New York City Police Harbor Unit. It is a sistership to the RB–M commissioned by the U.S. Coast Guard, also described in PBB No. 96.