The 30-knot, V-bottomed, 30′ surf rescue boat (SRB) pictured here was plagued by a dangerous, unstable condition at high speed: She would suddenly depress her bow, heel to port, then broach to starboard. Such dynamic instabilities are more common in planing craft than many designers might care to admit.

What these four powerboats had in common is one or more potentially dangerous dynamic instabilities at the high end of their respective speed ranges—all of them in excess of 25 knots. Did the instabilities occur due to design, or operation? If design, then is such behavior predictable?

The four cases in question were presented, either with still photos or video, by naval architect Dean Schleicher at a heavily attended IBEX ’09 seminar, in Miami Beach. Schleicher is technical director of Donald L. Blount & Associates, a naval architecture/marine engineering firm based in Chesapeake, Virginia. Schleicher stated at the session’s outset that his talk’s focus, in terms of dynamic instability, was on design.

In the latter half of the 1980s, the Blount office had closely examined the performance problems experienced by those particular Coast Guard and Navy boats; indeed, Donald Blount co-authored an award-winning paper describing a research plan for investigating the causes of their dynamic instabilities. The solutions for the boats’ problems turned out to be relatively simple. In the case of the Coast Guard surf rescue boat, slightly reducing the speed eliminated the hazardous condition. In the case of the Navy Special Warfare craft, the addition of a few strategically placed, vertically oriented separation wedges, applied to the forebody and extending downward from the chine, solved the bow-stuffing problem. Not incidentally, Schleicher pointed out that the Coast Guard and Navy models in question suffered from an unusually forward placement of the engineroom.

Note that the USCG and USN boats were the result of purpose-driven acquisition programs undertaken in the 1980s by the federal government. The two other boats cited here, the lobsterboat and bassboat, were production-built models not necessarily professionally designed or engineered; excessive propulsion (a monster gas inboard for the lobsterboat, a huge outboard on the bassboat) contributed significantly to their performance problems.

As Schleicher noted in advance of his IBEX session, “When boats behave badly, they’re often exhibiting non-oscillatory dynamic instability, a factor that remains a ‘dirty little secret’ as the marine industry continues to produce boats with unexpected, and often scary, handling characteristics. Not only do our military services continue to experience these problems, numerous production boats have been carefully (but quietly) diagnosed with dynamic instabilities. Why is this happening? Some causes are: market pressure; the availability of lightweight, high-powered propulsion systems; the demand for higher speed; and a persistent lack of awareness of the factors contributing to dynamic instability. Dynamic stability errors can be costly to diagnose and correct, so designers must avoid making them.”

It was only recently that the Blount office developed what it calls a Dynamic Stability Calculator. This Web-based, free software program performs computations that link geometry to load. In effect, the calculator enables a powerboat designer to plug in specific parameters and particulars for a given design, and thereby predict, or at least anticipate, the probability of bad behavior at high speed. According to the Blount office, “The most frequent causes of dynamic instability are related to one, or a combination, of the following circumstances: 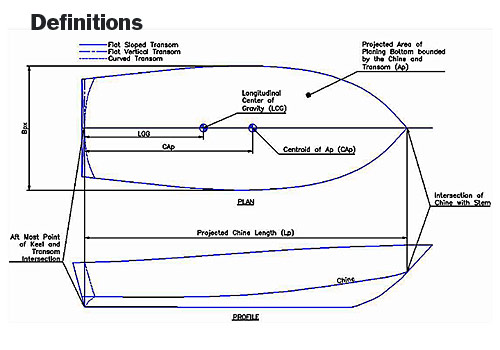 At IBEX, Schleicher first displayed plan and profile views of a generic hard-chine planing boat, above, so as to define key terms such as LCG (longitudinal center of gravity) and Lp (projected chine length), among others. He then took attendees through three different notional powerboats, by way of demonstrating the Dynamic Stability Calculator in action. The first two examples, Boats A and B, were shown with plan views to better indicate how to input critical dimensions; Boat C offers additional parameters. The DSC chart is zoned, annotated, and color-coded such that—assuming a designer inputs his or her data correctly—the graphics make the resulting output fairly self-explanatory. End users should bear in mind that the Calculator examples here are done with weight in pounds, and an LCG measured in feet from the transom/bottom intersection. 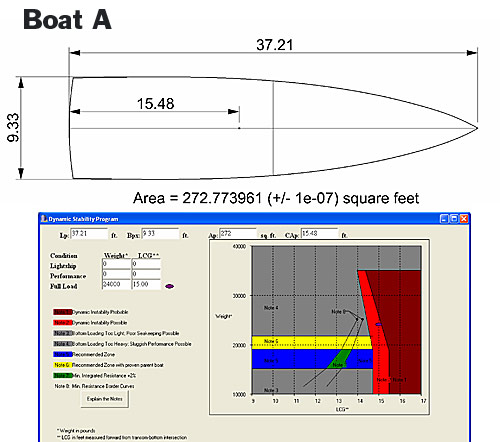 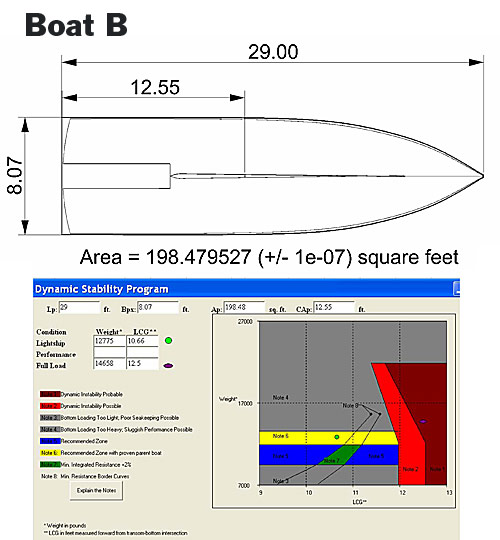 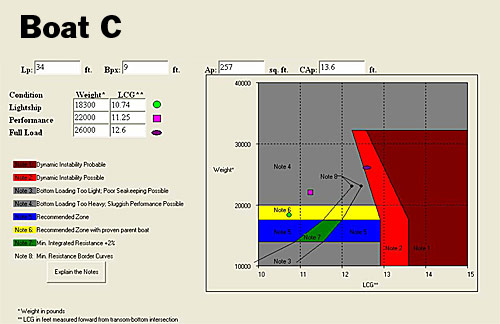 Schleicher also displayed two charts generated by the Blount office for troubleshooting bad behaviors: one, a schematic arrangement classifying various instabilities (transverse, longitudinal, and combined); and the second, a means of graphing “non-oscillatory heel criteria.” Generally speaking, some of the information these slides attempt to quantify have been built into the Calculator, but a detailed discussion of them is beyond the scope of this article.

In closing, Schleicher reminded the audience, “Dynamic stability remains an area where fundamentals are not clearly understood.” He added that while “spray rails, separation wedges, and chine flats can help out,” the Calculator can assist in avoiding flaws at the design stage, and in providing a platform “that can be expected to behave.” He emphasized that the Calculator covers only non-oscillatory behaviors.

For a full account of the dynamic instabilities of the Coast Guard surf rescue boat, see Professional BoatBuilder No. 31, page 20, the October/November 1994 issue—published long before the Dynamic Stability Calculator came along. It was written by naval architect Lou Codega, a former associate of Donald Blount’s earlier in both their careers.

As for the DSC itself, you can access it at the Blount office Web site.