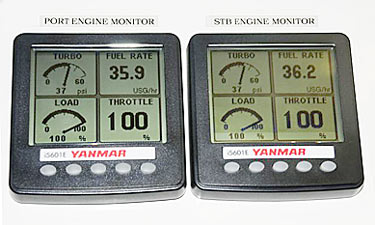 A few years ago I was carrying out a sea trial aboard a single-screw trawler that a client was considering for purchase. Part of the process involves running the vessel at full, or wide-open, throttle—what engine manufacturers often refer to as WOT. The boatyard where the trawler was stored launched it; I boarded along with my client, the yard’s chief mechanic (also an experienced captain), and the selling broker. I explained to the captain the sea-trial protocol I wanted him to follow, including the WOT test, and asked that he operate the boat at WOT for 10 minutes. He looked at me and simply said, “Negative.” I asked what the problem was, and he said, “We don’t run engines at full throttle around here.” I explained that every engine manufacturer clearly specifies a WOT rating, and the only way to ensure the engine can achieve it is by running at full throttle.

In the case of that engine, the manufacturer specifies that it can run at WOT for 30 minutes without any ill effects. As the debate deteriorated I could see the look of concern on the broker’s face, as the prospect for a successful sale ebbed. Finally, to his credit, the broker offered to call the local dealer for the engine. With the broker’s phone on speaker, the dealer made it clear that WOT was fine for 30 minutes. With that clearance, the captain agreed to carry out the test, as long as he was absolved of responsibility for any components that melted or otherwise failed. The boat and engine performed flawlessly, it achieved its rated WOT, and the sale proceeded. Regrettably, that’s an exception to the WOT testing rule; many boats fail to achieve this important benchmark.

Preparing a vessel for the owner’s use—whether it’s a day cruise around the bay or an offshore passage—includes ensuring the engine will operate reliably. Typically, that burden falls on the boatyard. The goal of such a trial is to reveal any latent defects in the engine or its associated systems, so they can be dealt with before the owner takes possession of the boat.

Every marine engine, whether it’s a tender’s outboard or a 1,000-hp diesel, carries a WOT rating established by its manufacturer: it’s the rpm the engine is designed to achieve when the throttle is pushed to its limit. For conventionally fuel-injected diesels, successfully carrying out the test involves making certain the throttle lever on the fuel-injection pump reaches its stop. For electronically controlled engines, the user must ensure that the engine instrument display indicates 100% load. Ideally, WOT sea trials should be carried out with the boat in cruising trim: 75% fuel and water, and all cruising stores aboard. 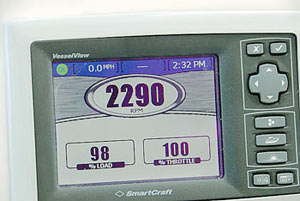 For electronically controlled engines, instruments should indicate 100% load at WOT.

There are several reasons for carrying out such a test. Among those is to ensure that the propeller (and transmission reduction gear) is properly matched to the engine. If a propeller has too much pitch, is too large in diameter, has too many blades, or has too much blade surface area for a given engine application, it will prevent that engine from reaching its WOT rating. In that case, you’d report the information to your customer with solutions, possible costs, and a timetable.

An “over-wheel” situation—too much pitch, too much diameter, too many blades, etc.—in a mechanically injected engine will lead to a phenomenon known as over-fueling, whereby more fuel is injected into the cylinders than can be efficiently burned. That results in poor fuel economy, cylinder coking, and black smoke. In electronically controlled engines, over-propping will often be recognized by the electronic engine control, which will automatically reduce the fuel being injected into the cylinder, thereby protecting the engine from damage and minimizing smoke. However, the scenario remains undesirable. In effect, the computer de-rates the engine; that means your customer’s 450-hp engine becomes a 380-hp engine, without him or her knowing it—especially if the problem has existed from the day the boat was built, or for as long as he or she has owned it. If that’s the way it’s always been, the problem is difficult to identify. Remember: Even if the customer never intends to operate the engine at WOT, ensuring that it can achieve this rpm is critical. It means the propeller is properly matched to the engine throughout the rpm range, and that the overall installation is sound.

Another reason for ensuring the engine can achieve and maintain WOT involves the efficiency of its cooling system. A sure way to determine the health of an engine’s cooling system is to operate at WOT. The engine should not overheat; yet, many engines I test are incapable of operating for more than a few minutes before the temperature gauge begins to creep into the red. Many times I’ve heard this explained as “normal”; I’m told that engines aren’t designed to operate at this load. Nothing could be further from the truth. If an engine overheats at WOT, something’s wrong with the engine or the installation. The exhaust system must also be included in the WOT overheat test. It’s possible for it to overheat while the engine runs at a normal temperature. During a WOT run, the dry and wet portions of the exhaust system should be tested using an infrared pyrometer. Any temperature over 150°F (66°C) in the “wet” portion of the system is cause for concern. 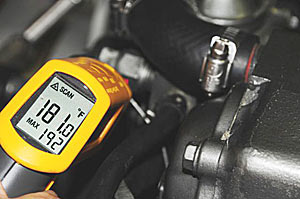 Wet and dry portions of the exhaust should be temperature tested during the WOT run.

The reasons for WOT overheating include clogged heat exchangers; worn-out impellers and pump cams; obstructed exhaust systems (remember: all cooling water typically exits through the exhaust, so if it’s restricted, it slows down all water flow); or, most insidiously, a flaw in the raw-water-intake system’s design. It’s not unheard of for new boats to overheat when run at WOT. In most of those cases, the problem is in the size or design of the intake plumbing.

Typically, when an engine fails to reach WOT, the first reaction of the builder, yard, or owner is to yank the propeller off and have the pitch adjusted. This is the last corrective action you should take. Before adjusting the propeller, check the exhaust system back-pressure. If it’s too high, it will lead to a reduction in rpm that pitch reduction will simply mask. Check the engine to ensure it’s in good working order, and that there’s unrestricted air and fuel flow; and for older engines, scrutinize fuel-injection systems, and make sure the valves are correctly adjusted. Once you rule out those possibilities, then adjust the propeller pitch to correct WOT issues. 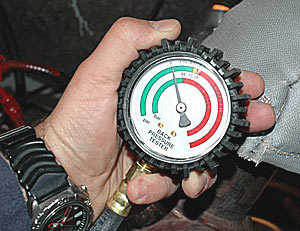 If an engine fails to reach WOT, check the exhaust system back-pressure.

Finally, part of the WOT test involves determining the engine’s governed rpm: that is, at what rpm will the engine limit itself to prevent damage? Typically this is 50–100 rpm above the WOT. Before carrying out a WOT test, while the engine is in neutral, advance the throttle to its maximum setting for a few seconds to determine the governed rpm. If, during the subsequent fully loaded WOT test the engine once again reaches the governed rpm, the propeller is likely under-pitched, has too few or too small blades, or its diameter is too small. While over-revving isn’t as detrimental as under-revving, it still represents a fault and loss of efficiency that you should bring to the owner’s attention—once again, with a proposed solution. Ideally, when fully loaded and in cruising trim, an engine should turn within no less than 50 rpm of its WOT rating.