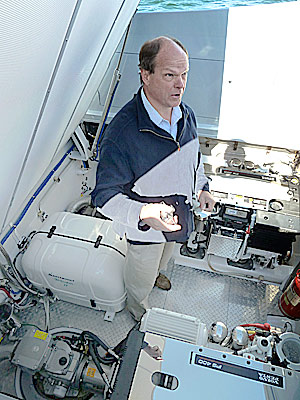 In Professional BoatBuilder No. 129, contributing writer Eric Sorensen reports on the repowering of a 1954-vintage Huckins Fairform Flyer by a crew at Yachting Solutions in Rockport, Maine. Noteworthy is the owner’s choice of propulsion for this classic motoryacht: Volvo Penta’s Inboard Performance System (IPS) pod drives, a sophisticated technology that has been available to recreational boaters for only five years. For the most part, the IPS has been installed in new boats, often with hullforms originally designed, or significantly reengineered, to accommodate the pod-drive system. The Huckins Northern Spy is the first exception.

In the case of Northern Spy, much of the bottom had to be rebuilt, and Volvo Penta representatives kept close tabs on the project, including the installation of the engines and pod-drive units, to insure a high-quality result for the owner. The company’s engineers specified the laminate schedule in the engineroom and the engine beds to ensure adequate support for the powerful propulsion units. Indeed, the forces are markedly different than those of a conventional shaft installation, where struts, engine beds, and thrust bearings absorb much of the driving force of the propellers. The leg of each pod drive protrudes from the hull bottom, and is supported largely by the integrity of the hull material and reinforcing ring surrounding the drive through-hull fitting. In addition, the hull must withstand the force of an unintentional grounding that would cause the propulsion pod to break away as designed, while leaving the hull intact and afloat.

The text and photos in the magazine detail the repower/rebuild project in the shop, and include performance data, but there’s nothing like a sea trial to judge the success of the boat’s operation. During a day on the water last November, Sorensen and I were impressed by Northern Spy’s stable performance under way; she handled with fingertip control while producing minimal engine noise, and enviable fuel economy for a boat her size.

Take a look at some video of the pod-driven Huckins.

While writer Eric Sorensen and editor Aaron Porter look into the clean, well-laid-out, totally accessible engineroom, the engines were started. The rattle of the diesels diminishes to a low hum as the hydraulic hatch over the engineroom closed.

Getting the relatively high-sided Huckins off the dock is easy with the pod drive in joystick mode.

Likewise, the boat is easily maneuvered at low speed for mooring or fish handling. Note the visible wash from the moving propellers as they articulate independently to hold the boat on station or walk it sideways or diagonally—not something you can do even with the average twin-screw powerboat.

At speed the old Huckins hull has a flat wake and remains remarkably stable when cornering. Trim tabs can be adjusted to allow the boat to run flat even in significant crosswind.