Boating, of course, manifests itself in myriad forms (power, sail, oar, paddle) and sizes (skiffs, superyachts), in a wide range of environments (ponds, open ocean). Whether deliberately or inadvertently, many of us start collecting boats or motors, fishing tackle or marine books, nautical memorabilia or specialized hand tools as an outgrowth of our interest in particular types of boating or watercraft. A very few of those personal collections evolve into something significant, and Professional BoatBuilder magazine has previously reported on two: Maine marine mechanic/trainer/dealer Lincoln Davis’s private collection of historically noteworthy Mercury outboard motors (see PBB No. 92, page 68); and the late John Harrison Sr.’s private collection of seminal outboard boats and motors, currently curated by the Historical Museum of Southern Florida (see PBB No. 119, page 66).

Last June I got to see a good portion of yet another impressive private collection. I’d been made aware of it by Doug Theobalds, president of Epifanes North America (the Thomaston, Maine–based importer of Epifanes yacht coatings, manufactured in The Netherlands) and an avid rowing enthusiast.

But not just any kind of rowing. Theobalds is a devotee of single-seat rowing shells, specifically: classics made of wood. (Hey. He sells marine varnish.) Near Theobalds’s Epifanes distributorship, Darryl Strickler and partner Cassy Burleson occupy a century-old recycled boatshop on the St. George River that contains Strickler’s and Burleson’s living quarters, an upstairs vacation rental unit, a workshop, and a boathouse sheltering a changing inventory of rowing shells—some for active livery, some for restoration, and some that, given their status as antiques, are suitable for display only.

In the niche world of rowing shells, Strickler is an enthusiast’s enthusiast. A semi-retired cognitive psychologist (he’s taught at the university level and consulted for corporations, IBM among them), and a former competitive rower, Strickler created an organization he named Rowable Classics, or R/C here, for short. R/C, he says, “builds, buys, restores, and sells wooden rowing shells and used composite rowing shells, used racing shells, and all types of single and double sculling boats.” Besides boat work that he does himself, Strickler has lined up small shops in different parts of the country to execute repairs or do complete restorations as needed.

R/C, he points out, “is not a commercial enterprise, but operates like a not-for-profit collaboration among people committed to preserving, restoring, building, owning, rowing, or displaying wooden sliding-seat rowing boats.”

In other words, R/C functions as a kind of rowing-shell rescue league. On a literal global scale, he has found, and found homes and owners for, “boats in all sizes (singles through fours), and all ages (1860 to 2000s) from North American, English, European, and Australian builders,” along with sweeps and sculling oars from several sources, most of them defunct, with which to propel them.

A vintage spoon blade made by Josepha Garofalo, founder of Worcester (Massachusetts) Oar & Paddle Co. in the late 1930s.

R/C “stocks” about 100 wooden boats, and has them stashed—in their various conditions—in various locations in the United States, of which Thomaston is but one. Strickler settled there (he and Burleson divide their time between Maine, Illinois, and Texas) in part because Doug Theobalds bought a boat from Strickler sight unseen, and effectively joined Strickler’s R/C salvation mission. “It’s the only boating I do now,” says Theobalds, a Canadian-American who was a professional ocean sailor growing up in Europe. “You’re in a sliding seat,” he says, “but you’re really in the water. And moving fast with minimal effort, because the boats are so light. The sensation is incomparable.”

And very green these days, to be sure. Through R/C, Strickler sells the boats and oars he finds “for the amount invested to acquire, ship, store, and refurbish them.… More expensive boats are either new or newly restored. Those that cost less typically need restoration or repair.” Proceeds from sales, he points out, are reinvested in the “ecology of wooden rowing boats,” particularly those of historic value. For Strickler and other like-minded rowing aficionados, the overall objective is not only to raise consciousness about what is arguably rowing in its purest form, but also to save what he considers “hand-built works of art.”

R/C maintains an inventory, cataloged on a spreadsheet, which enables Strickler to match a prospective customer with an appropriate rowing craft. The categories consist of racing/training boats, recreational/open-water boats, boats for restoration or display, and finally, sweep oars and sculling oars. 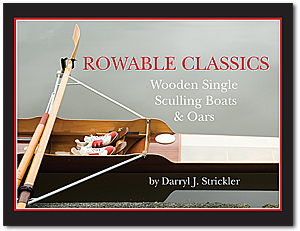 To my mind, the most eloquent case for these magnificent rowing machines is a volume titled, naturally, Rowable Classics, authored by Strickler, published by WoodenBoat Books , and beautifully designed by Lindy Gifford, a former art director of WoodenBoat magazine. Within the span of 142 pages, in a format measuring just 8.5″ x 11″ (21.6cm x 27.9cm), Strickler’s Rowable Classics has the appearance and appeal of a coffee-table book, given its generous amount of color and archival photography. An acknowledged expert on the subject, Strickler is clearly passionate about the entire genre of ultra-skinny boats, but he never gushes.

Strickler begins with a brief overview of wooden sculling boats, discussing their place “in time, in the public awareness, in the hearts and minds of others, and in the lives of their builders.” He then profiles builders of note in the United Kingdom, the United States, Europe, Canada, and Australia, in that order. Several of the most recognizable names have achieved transcendent status: Sims, Pocock, Schoenbrod, Stampfli. There’s a chapter on assorted types of non-racing sculling boats, followed by one on oarmakers here and abroad, past and present. Strickler closes with advice on acquisition, storage and transport, and rowable waters. An appendix offers, first, technical drawings accompanied by instructions on making a set of sculling oars; and second, a lines plan and detailed construction sheets for a representative single-seat racing shell, circa 1954. These illustrations come from Canadians Simon Watts (the oars) and Jakob Kaschper (the shell).

Not incidentally, Rowable Classics won the Independent Publishers’ 2009 Gold Medal Award in the crowded field of Sports, Recreation, and Fitness—meaning it was recognized as the best of hundreds of books published that year on everything from, say, the Green Bay Packers to yoga for beginners. As for Rowable Classics, the collaborative, additional information is available on its Web site, www.rowableclassics.com, where you can also buy a signed copy of Strickler’s book. Alternatively, the book can be purchased from the publisher via www.woodenboatstore.com.