Reuel B. Parker (All)

Late last December, 13 years after I designed and built the prototype Commuter 36 (11m) Magic, her owner, Erik DeBoer, brought the boat back to me at Parker Marine, in Ft. Pierce, Florida, for repairs. I hadn’t finished that job in time to include the details in the Commuter series Design Brief in Professional BoatBuilder No. 130, but thought them worth sharing with readers. The recent repairs are instructive in terms of the durability and repairability of Magic’s lightweight plywood/epoxy construction. I also added bilge keels, which early reports suggest successfully reduced the boat’s vulnerability to crosswinds.

Magic has a bow roller lag-bolted to her stem head. Over years of anchoring, the fitting worked back and forth under load, loosening the bolts and allowing rainwater to seep into the wood beneath the fabric/epoxy covering. DeBoer made some repairs himself and cured the immediate problem.

After several more years it became apparent that rot had spread to the breasthook and sheer clamps. The local boatbuilder DeBoer hired to make more substantial repairs failed to properly bed the toerails, and rainwater found its way down the screw holes and caused more rot.

In the following photographs, I show the sequence of repairs to Magic during the winter of 2010–11. 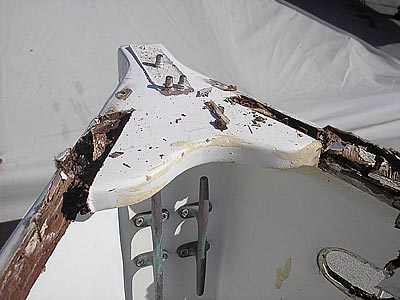 Rotten sheer clamps were caused by lack of bedding compound. I chased the rot, which had progressed through the sheer clamps and plywood topsides planking, until I was into solid, healthy wood. Rot had also started around the hawse holes (bottom right). 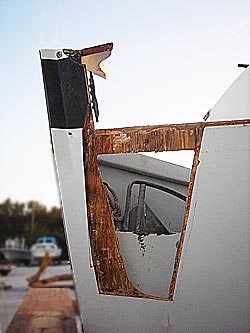 Port-side planking shows the extent of rot. I elected to laminate new topsides planking from two layers of ¼″ (6mm) marine plywood instead of one layer of ½″ (12mm) as originally built. 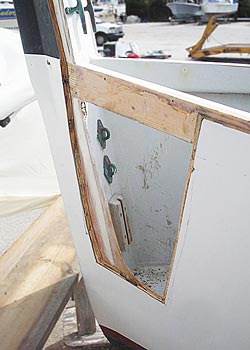 Port-side planking is removed, and perimeters rabbeted and beveled for the first laminate of new planking. I replaced the sheer clamps with industrial-grade pressure-treated yellow pine. I spread thickened epoxy over several saturating coats of thin penetrating epoxy, and fastened with stainless steel self-drilling/tapping screws. 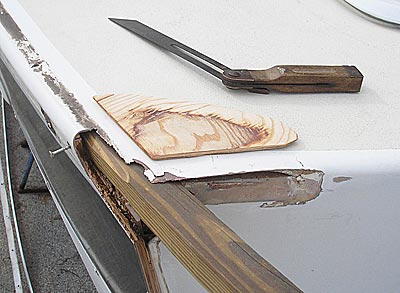 New sheer clamp, starboard side. After laminating the first plywood layer in place, I created a larger rabbeted landing for the second plywood layer. 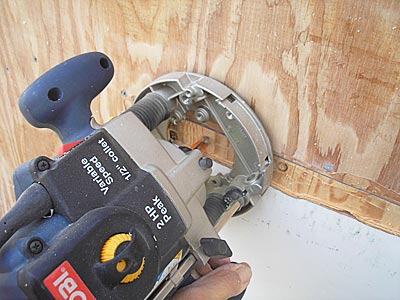 With a plunge router and flute bit I cut rabbets. After the two hull laminates were complete, I added a third laminate inside the anchor well to reinforce the hull around hawse holes. 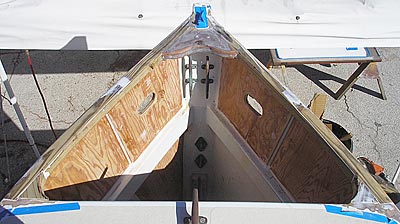 A third plywood laminate inside; new knees installed aft. After completing all woodwork, I faired and sheathed with Xynole-polyester cloth saturated with thin epoxy, including the hawse apertures. 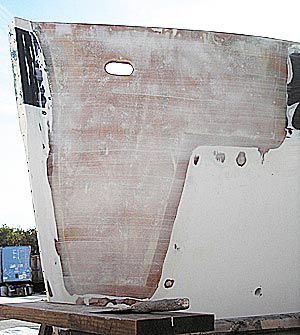 The new work covered with fabric/epoxy and glazed. 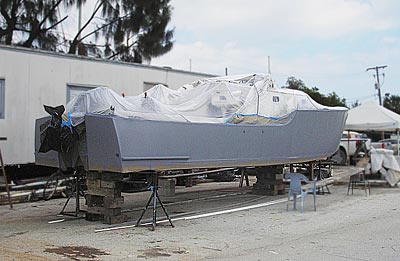 The hull primed with Awlgrip 545. I repainted Magic’s hull with DuPont’s Imron products because I find them easy to work with, economical, and superior in durability and color/gloss retention.

Because Magic has always been difficult to maneuver in crosswinds at low speeds, I proposed that we install bilge keels. I designed them to be 30″ long, 6″ deep, and 1½″ thick (726mm x 152mm x 38mm). We built them with expanded PVC covered with biaxial fiberglass cloth.

Treating the boat’s outboard profile as if it were a sail, I computed the center of effort. Similarly computing the center of lateral plane of the hull underbody, I located the bilge keels to counter the effect of windage above, such that the bow would fall off before the stern in a direct crosswind. I placed the bilge keels 4″ (101.6mm) inboard of the chines. 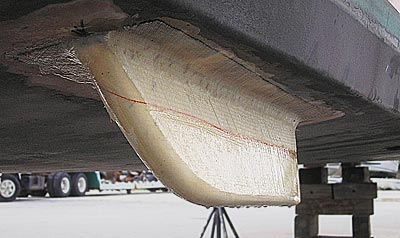 Bilge keel laminated to the hull bottom with biaxial tape and epoxy.

In early February 2011, DeBoer retrieved Magic and drove her home to Key West. I was nervous about the new bilge keels until I received this e-mail:

The bilge keels are a success. They have improved the handling in a number of subtle ways, and have no discernible effect on speed that I can feel. They don’t cure any problems completely, but they do make the boat easier to handle. I am glad we added them.

Leeway in a crosswind is now more neutral and probably a bit less overall than it was. Though the bow still falls off, it is less of a problem.

Slow-speed maneuvering feels more secure with the boat pivoting rather than skidding. There is more of a feeling of the boat following the bow, rather than the stern being shoved over.

High-speed turns are more level with less dramatic banking. The dramatic banking of the past was more fun, but it also created a tendency to lift the prop and cause it to lose grip and spin out. Though it is still possible for that to happen, the tendency is noticeably reduced. I think the boat to a certain extent trips against the outside keel in a high-speed turn. Though it is not enough to cause outward lean, it is enough to almost level it out. Because of this I wouldn’t make them any larger, or dreaded outward lean could result.

Tacking around the anchor in a wind is still the norm, but the motion is considerably slower than it was and without the jerking that would happen at the extremes of the oscillations.