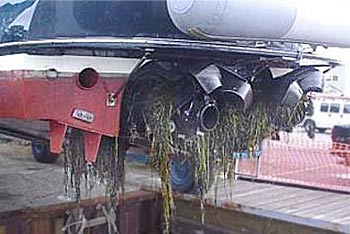 This heavily fouled jet boat had to be hauled in order to clear seaweed that had completely clogged its propulsion system.

That’s when Jack Hargrave came up with the then-unorthodox idea of combining supercharged diesels with waterjet pumps, along with a special steering system, and installing this outfit in a stock 28‘ (8.5m) fiberglass hull he’d recently designed as a pleasure cruiser for the Hatteras Yachts product line. The purpose: to meet, on a short deadline, seemingly impossible specifications issued by the U.S. Navy for a small, fast, highly maneuverable, shallow-draft gunboat. The mission: riverine patrol duty and special operations in the burgeoning conflict in Southeast Asia that became the Vietnam War.

Hatteras founder Willis Slane, whose business was booming, put the plant on a wartime footing to build a running prototype in record time—at his own expense. And then demonstrated the semi-finished boat for Navy procurement officials, who were truly impressed. Long story short: Slane died shortly after that demo, and the production contract for a boat of that type went to another company instead. The resulting adaptation of a recreational hull (Uniflite’s)—officially designated “PBR” (for “patrol boat, river”)—changed combat tactics in the estuarine environment of South Vietnam. Moreover, the PBR’s extraordinary maneuverability, thanks to waterjets, presaged the later market success of the stylish and nimble waterjet-equipped Hinckley Picnic Boat, introduced in the early 1990s.That’s when Jack Hargrave came up with the then-unorthodox idea of combining supercharged diesels with waterjet pumps, along with a special steering system, and installing this outfit in a stock 28‘ (8.5m) fiberglass hull he’d recently designed as a pleasure cruiser for the Hatteras Yachts product line. The purpose: to meet, on a short deadline, seemingly impossible specifications issued by the U.S. Navy for a small, fast, highly maneuverable, shallow-draft gunboat. The mission: riverine patrol duty and special operations in the burgeoning conflict in Southeast Asia that became the Vietnam War. 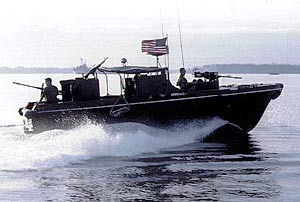 A U.S. Navy waterjet-equipped PBR Mark I on patrol early in the Vietnam War. Running primarily in shallow canals and inland waterways, these boats suffered from impeller wear, fouling, and engine overheating.

Why bring up this history? Because—despite the literal trial by fire of a jet-powered recreational hull, and decades of technical development of waterjet propulsion mostly in commercial small craft—one significant waterjet problem, which immediately manifested itself in Vietnam, persisted, unresolved…until about five years ago, when Maine boatyard owner-operator Ted Wengren devised, and subsequently patented, a relatively simple retrofit for existing waterjet propulsion systems.

Contemporary accounts of first-generation PBRs in the battle theater speak of “sea-water intakes clogged…by plastic bags, nylon line, and palm leaves,” according to naval historian Norman Friedman, in his definitive compilation, U.S. Small Combatants (Naval Institute Press, 1987). Operating in the sculch of Vietnam’s shallow canals and inland waterways, PBRs suffered premature wearing of their jet pumps’ impeller blades, as well as a shortened life span for the diesel engines due to overheating. 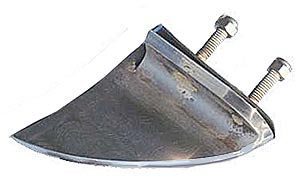 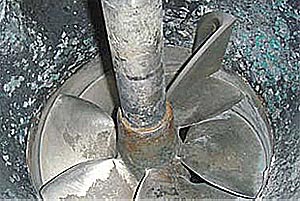 The thick stainless steel fin cutter installs just in front of the quickly rotating impeller, sweeping fouling from the blades without actually making contact with them.

At his South Freeport boatyard, called Strouts Point Wharf Company, Wengren was seeing customers’ waterjet systems similarly plagued by seaweed, eel grass, kelp, lobster-pot warp, and other flotsam in the near- and alongshore environment of the Maine coast. Indeed, the handicapped performance of Wengren’s own jet boat in home waters helped prompt his search for a proactive solution—beyond the by-now traditional fix of stopping and back-flushing the propulsion system.

As originally reported by Professional BoatBuilder’s Dan Spurr in the magazine’s Rovings column more than a year ago (see “A Chronic Waterjet Problem—Solved,” PBB No. 122, page 16), Wengren came up with a rugged, precision-manufactured, two-part arrangement he calls the Fin Cutter System. One part, the fin cutter, is internal and passive: it’s a static, cast dorsal-shaped fin bolted through the impeller housing immediately in front of the impeller, which sweeps fouling off the pump’s rotating unit. The second part is external and active: a robust, chisel-like flat blade operated hydraulically and incorporated into a specially designed intake screen. Any marine growth or debris that collects on the screen is removed by the blade. All components in the system are made of stainless steel.Wengren’s add-on device, which eliminates the time and nuisance of stopping and back-flushing, does not interfere with the boat’s or jet’s hydrodynamic performance; can be run at any time, at any speed, and under any sea conditions; and features only two moving parts—the cutting arm and its hydraulic cylinder. 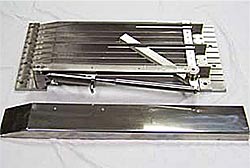 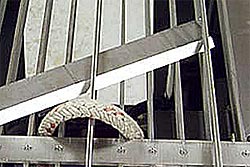 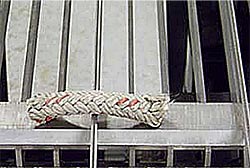 On the intake side, a hydraulically operated cutting blade fitted to a stainless screen allows for the removal of any debris that collects there.

Since publication of Spurr’s brief item in PBB, Wengren’s yard installed a Fin Cutter on a jet-drive Hinckley 44 (13.4m) last June. Wengren reports, “The boat went the entire summer without back-flushing once. Normally it would be multiple times per trip. The owner was quite pleased. He said some years the fouling was so bad that back-flushing would not work, and he had to go swimming in order to fix things—not a great idea even in good conditions.”

This spring, Strouts Point Wharf Company will install a Fin Cutter in a Hunt-designed Surfhunter 29 (8.8m) equipped with UltraJet propulsion. “And,” says Wengren, “we have inquiries for more boats. Also, Ultra Dynamics Inc. [Columbus, Ohio] is now suggesting our system as an aftermarket option for their UltraJet waterjets. This is something we hope will yield results on a larger scale in commercial and military craft.” (Wengren exhibited his Fin Cutter at the 2009 edition of the annual Multi-Agency Craft Conference in Norfolk, Virginia. For a feature describing that event, see PBB No. 121, page 78.)

“Finally,” he says, “we now have a sophisticated operating control switch. It was created by the same guy who does Predator-drone control systems. This switch can be programmed to function any number of ways; for the moment it’s like the wiper control on your car. In the near future it could be fully automatic, in which case the helmsman does nothing; the system just goes no matter what’s in the water.”

An architect with bachelor’s and master’s degrees from the University of Pennsylvania, Wengren had a professional education with a considerable amount of engineering, so his foray into industrial design by way of the Fin Cutter is not far off course. What frustrates him, though, given the lengthy documented history of waterjets behaving badly, is the slow market interest in his better mousetrap. “I don’t know why this is so difficult to get going,” he says. “Whether it’s the rotten economy or what. Maybe it’s just not that good an idea. But the boats we have them on run perfectly, and the owners are very pleased. So we will continue to hang in there.”