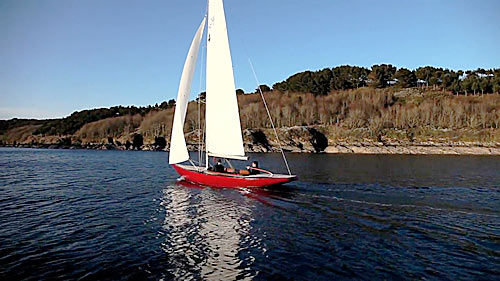 The eye-catching R24 is Rustler Yachts’ interpretation of a David Boyd–designed Six-Meter.

Like them or not, boat shows are a fact of life for professional boatbuilders. Deep as we may now be into the digital era, no virtual presentation on a computer screen can replace the visceral experience of walking the docks at an in-water show, or walking through an exhibit hall full of actual boats artfully displayed.

I confess I’m in the not-like-’em camp. I prefer to visit boats in the shop or yard, or view them in their natural habitat—meaning, on a mooring or when under way.

But, attend boat shows we must, so one sunny Sunday last August I found myself at a packed, mostly in-water event. Produced by Maine Boats, Homes & Harbors magazine, the annual show’s venue encompasses much of the public and commercial waterfront near its Rockland offices. The fleet included boat builders and dealers from throughout the New England region.

As I walked the docks—looking left and right at boats tied-up lengthwise here and stern-to there—something stopped me in my tracks. That it did so in such a busy environment was remarkable, especially since the boat’s deck, on a falling tide, was lower than the dock surface. Additionally, she lay alongside the dock and I had to double back across a basin to the bulkhead wall to see the boat in profile.

What was this showstopper?

A Rustler 24, made in England.

Briefly stated: she’s a tiller-steered fiberglass daysailer with a tiny transom, full keel, long overhangs, short cockpit, teak deck (over a glass substrate), and an optional 10-hp/7.5-kW inboard diesel engine. The boat at the Rockland show belonged to a local owner; it was being exhibited by the Newport, Rhode Island, dealer who’d sold it. What made this 24-footer (7.4m) visually arresting, besides the evident quality of workmanship, was that she seemed to be from another time. Indeed, I learned the R24 is based on Six-Meter lines drawn by Scottish designer David Boyd in the 1960s. He also drew 12-Meter boats that competed for the United Kingdom in the America’s Cup.

Boyd first made a name for himself as the designer of Circe, a Six-Meter that won the coveted Seawanhaka (New York) Cup in 1938 by defeating Goose, an Olin Stephens design. It’s worth noting that Stephens’s pioneering studies in modeling sailboat performance started with scale models of Six-Meters in the towing tank at Stevens Institute of Technology, in New Jersey. Stephens was a co-founder of Sparkman & Stephens, the design firm whose boats ultimately defeated those of Boyd et al. in Six- and 12-Meter competition. But the point here is that, with the R24, you’re sailing, in effect, a baby Six. (According to the builder, Rustler Yachts of Falmouth, in Cornwall, the R24 is Rustler’s “interpretation” of a Boyd hull design; Rustler designed the deck plan and rig.)

I can’t comment on the boat’s sailing qualities, but I understand design and construction well enough to know the R24 cannot possibly be a slug. Video footage of a R24 under sail shows her moving along smartly, even effortlessly; sales, too, reportedly have been brisk since the model was introduced in 2010. And no wonder: she’s got great appeal.

The hull is single-skin fiberglass, with encapsulated lead ballast, and a liner forming the cockpit. The rudder’s stainless steel stock hangs from the trailing edge of the keel. Deck gear is Harken, spars are Selden aluminum, and sails are Dacron, made by Hyde; all of the above are sourced through UK suppliers. 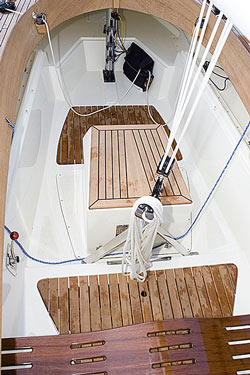 Rustler set up the R24’s modern cockpit for easy sail handling, and shaped the helmsman’s thwart for comfort. The engine box accommodates an optional inboard diesel.

I won’t list the numerous items that comprise the boat’s specifications and outfit. The R24 is nicely detailed in fit and finish, and in deck construction and layout—the elements I could see for myself in Rockland. Beyond that, Rustler seems to have anticipated everything a knowledgeable owner might require in the way of standard equipment and available options. Should a prospective buyer request the inboard diesel, it resides in an engine box in the cockpit. The alternatives would be a bracket-mounted outboard or no auxiliary power.

Until the 24, Rustler’s product line focused exclusively on cruisers. The company began operations in the early 1980s with a 36-footer (11m). In 2005 Rustler Yachts moved into a new production facility where, in addition to the 24, it builds cruisers ranging from 36′ to 58′ (17.7m). Those boats bear little resemblance to the R24; they’re what might be called conventional cruisers in the modern vein, not unlike, say, a Malo or Sabre. Positive market response to the 24 daysailer persuaded co-directors Adrian Jones and Nick Offord to offer something similar only larger: a weekender. Thus, Rustler will soon roll out a scratch-designed, performance 33 (10m) with traditionally styled topsides, a canoe underbody, fin keel, and minimal accommodations. This model is expected to tap into a trend developing in Europe and already established in the States, one successful example being the smaller end of Morris Yachts’ S&S-designed M-series. 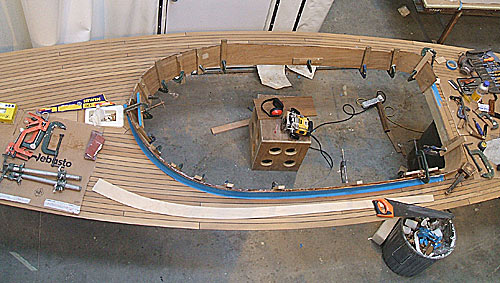 The R24’s curved coaming is typical of the model’s quality woodworking.

Finally, Rustler prides itself on not outsourcing any of its production. “Everything’s done in house,” says Offord. The R24 that I saw at the MBH&H show certainly speaks well for the company’s conscientious approach to boatbuilding.