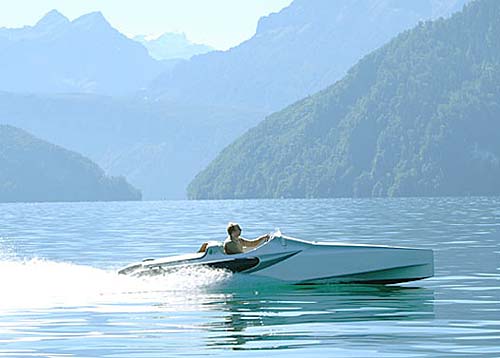 A Swiss firm, Silicon Fire AG, is making some bold claims about replacing batteries, and conventional fuel, with hydrogen-methanol on board boats.

“Electricity can be stored at any time in the form of hydrogen-methanol, which means that attempts to store electricity in the form of electric batteries, which are considered environmentally detrimental, are no longer necessary,” the company recently published on its Web site.

Silicon Fire, whose mission is to develop products that reduce CO2 emissions, is coordinating the efforts of numerous global partners to advance the concept of employing hydrogen-methanol as a means to power, or help power, a boat. Methanol derived from fossil sources such as coal has been around for a long time, but fails to meet the criteria of being regenerative and CO2 neutral. Silicon Fire teamed with the Technical University Munich (Germany) to find an alternative: obtaining CO2 from industrial exhaust gases from sources such as limekilns.

According to Silicon Fire’s Web site, the company’s mobile refinery station (about the size of a freight container) “…generates hydrogen-methanol from regenerative energy, water (hydrogen), and carbon dioxide (extracted from industrial waste).” The result is a combustible liquid that is either added to conventional fuel to reduce CO2 emissions or burned at 100%. Residue “is mostly water.” And only a “few modifications are necessary to convert a conventional motor for use of methanol.” The mobile refinery can produce 264 gal (1,000 l) per day.

What makes hydrogen-methanol interesting for the marine industry is the experimentation with it by two boat companies: Code-X, in Meggen, Switzerland (which has the same contact information as Silicon Fire), and Felleryachting, a young company in Germany. 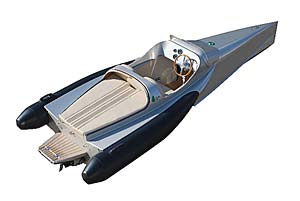 Felleryachting’s 5.45 (18′) Dymax runabout is one of three prototypes engineered to run on Silicon Fire’s hydrogen-methanol.

Felleryachting produces a 17′5″ (5.3m) Dymax P1 runabout powered by an outboard motor, either 45 hp or 60 hp (34 kW or 45 kW). Beam is 6′ (1.8m) and weight 573 lbs (260 kg). The company calls it a “dynamic slender planning craft.” Inflatable sponson-like tubes provide stability. To help reduce drag, there’s a step to draw air. “The easy, rounded sections act as shock absorbers, eliminating pounding,” reads the Web site. Construction is “wood, foam, epoxy, and reinforcing fibers.” Several larger versions, featuring Weber jet drives or surface drives, are either being tested or are on the drawing board. 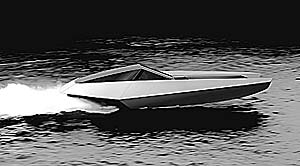 Specifications for the Code-X craft say its hull was completed by FB Design (founded by Fabio Buzzi) in Italy, is powered by two Ilmor MV10-710, 710-hp (533-kW) engines, and is capable of running at 90 knots burning fossil fuel with Silicon Fire methanol as an additive. It also has two electric engines and solar panels, but no batteries, of course. No descriptions of construction or other particulars are included. [For the first of two articles on the Italian builder of performance powerboats, see “Buzzi” in the upcoming October/November issue of Professional BoatBuilder, No. 133.]

Silicon Fire and Felleryachting invite a test-drive of the technology on Lake Lucerne, Switzerland, where the boats are docked at the Hotel Greaziella.