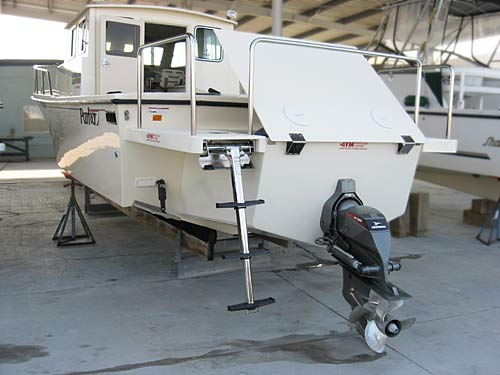 The Parker 25 Extended Cabin after being converted from twin outboards to the Armstrong Yanmar Marine bracket.

Owners or buyers of boats with bracket-mounted outboards now have an alternative when it comes to powering their boat. Yanmar Marine of Adairsville, Georgia, and Armstrong Nautical Products of Stuart, Florida, have teamed up to offer a diesel sterndrive in an enclosed bracket that you can mount on a boat’s transom.

Dubbed the Armstrong Yanmar Marine (AYM) bracket, it’s an aluminum enclosure that houses a Yanmar diesel engine with the outdrive extending from the rear of the housing. Think of it as an extension box that contains the engine.

“I designed the bracket around the Yanmar BY series of engines,” said Rusty Sedlack, vice president of Armstrong Nautical Products. “The BY engines’ light weight makes sense. The numbers are similar to the larger V-8 outboards or a pair of smaller outboards.” For example, the weight of a Yanmar 6BY2-260Z engine, drive, and AYM bracket is about 965 lbs (438 kg). A pair of Yamaha F150 outboards weigh about 952 lbs (432 kg).

The first boat to run the AYM was a Parker 25 (7.6m) Extended Cabin, which is usually powered by a pair of Yamaha F150s. Engineers chose the 260-hp (194-kW) Yanmar 6BY2-260 with a Yanmar ZT350 hydraulic clutch sterndrive. The boat reportedly ran at the same attitude throughout the speed range as the Armstrong bracketed outboard version, hitting 36 mph, with more prop testing to come. 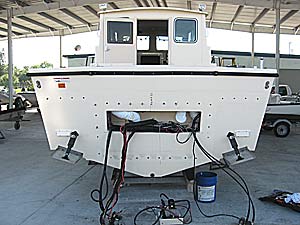 In addition to feeding air to the motor inside the bracket, the 1′ x 3′ (31cm x 91cm) hole in the boat’s transom allows for cable, wire, and hose routing.

The AYM bracket is a custom design because it has to match a given boat’s transom angle. Parker added ½″ (13mm) of coring material to the 25 Extended Cabin’s transom to support the bracket.

The bracket does not, however, mimic the hull bottom shape. Instead, to position the propellers of the ZT350 at the proper height, the bottom of the bracket appears to be about 6″ (152mm) above the boat’s keel, which has a narrow pad at the stern. The design also ensures that denser water is fed to the propellers because it’s not aerated coming off the boat’s strakes. 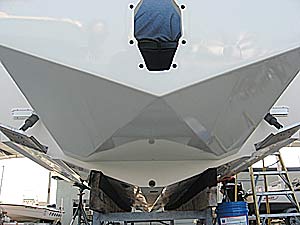 The bracket’s bottom is designed to feed clean water to the Yanmar drive and to preserve the boat’s turning ability.

The bottom of the AYM looks like three triangles. The center starts wide, approximately 2′ to 3′ (0.6m to 0.9m) at the front of the box, and tapers aft into a V. Outboard sections of the bracket’s bottom are designed with the opposite shape, narrower at the leading edge and widening out to similar dimensions at the rear. They are also angled up and away from the bottom. This was necessary so the boat can still turn. If the outboard sections of the bracket’s bottom were flat, they would act as giant trim tabs, pushing up the stern instead of letting the boat lean into turns as a V-bottom is designed to do. Engine noise is suppressed by the bracket. With the more powerful diesel engine, you get a superior alternator power of 150 amps versus 70 amps for two outboards.

The bracket measures 4′2″ (1.27m) front to back, and even though its overall deck area spans the 25 Extended Cabin’s 9′ (2.7m) beam, the actual width of the box provides access space on each side of the engine. The additional access areas are removable to make the AYM bracket easier to ship. Yanmar is hoping that the unit will be attractive for re-powers. Given the popularity of diesels in Europe, making the bracket as small as possible for shipping seems reasonable. Inside, it has aluminum stringers set to the width of the appropriate motor mounts, plus a flat spot for a bilge pump and a drain plug. 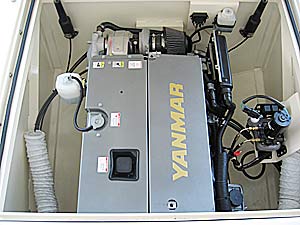 With plenty of space on each side of the motor, servicing it inside the bracket housing won’t be an issue.

Whether it’s being installed in a new boat or as a re-power, it needs a 1′ x 3′ (31cm x 91cm) hole in the boat’s transom. The opening feeds sufficient air to the engine. The bracket is fastened to the 25 Extended Cabin’s transom with 25 half-inch stainless steel bolts with Nyloc nuts and 2″-diameter (51mm) stainless steel washers. Wiring harnesses are run through the opening and hidden in a large chase. Since the engine is electronically controlled, rigging is simpler than that with shift and throttle cables. Fuel lines are run through a separate conduit.

The AYM made its debut at the Miami Boat show in February, and the 25 Extended Cabin is undergoing additional performance testing before it is again displayed at the Fort Lauderdale Boat Show in October. With the 6BY2 and ZT350 drive, the unit added approximately $46,000 to the price of the 25 Extended Cabin.