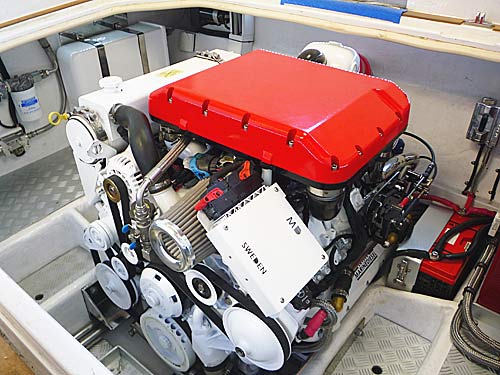 With dimensions that closely match a big-block gasoline engine, the Duramax-based VGT series diesel is attractive for re-powering.

A Swedish diesel engine marinizer is now offering marine versions of General Motors’ popular 6.6-liter (403-cu-in) Duramax diesel offered in Chevrolet and GMC heavy-duty trucks. Sweden Marinediesel signed an OEM agreement with GM two years ago, and in July started selling the 6.6-l marine engines in the United States, Canada, and Mexico through its subsidiary Performance Diesel Inc. in Galveston, Texas. Called the VGT series, the engines were developed over four years at Marinediesel and are available in 350-hp (216-kW), 400-hp (299-kW), 450-hp (336-kW), and 500-hp (373-kW) models. Marinediesel employs its own Electronic Control Unit and variable geometry turbocharging system with a Bosch common-rail fuel-injection system. The engines also have a closed-cooling system for saltwater applications. (The company is working on a version of the engine equipped with twin Lysholm superchargers called the TSC. Projected horsepower would be approximately 500, but this motor is on hold.)

Part of what makes the Duramax viable for boats is the block’s noise- and vibration-dampening features. Deep-skirt cylinder-block structure helps add strength, as do the bearing caps connected to the lower part of the block with side bolts in addition to the main bolts. Six 14mm head bolts are used per cylinder, and within the gray iron-alloy block spins a 4340 forged-steel crankshaft. 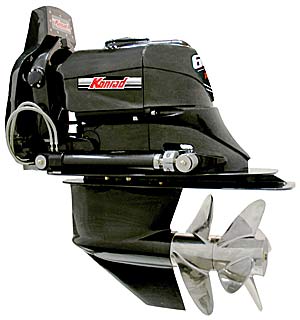 The VGT series is available as an inboard or a sterndrive. For the latter, Marinediesel packages the engines with Konrad Marine’s  600 series drives, available in three models. The 600 is a twin-prop drive for up to 16″-dia. (406mm) props, while the 680 is designed for twin 20″-dia. (508mm) props. For single-propeller applications, the 620 can accommodate up to a 20″-dia. prop.

“These are the only sterndrives on the market capable of handling this power for commercial use,” said Marinediesel’s CEO and special projects account manager, Andreas Blomdahl, of the Konrad drives. Konrad Marine is also working with Gale Banks Engineering, an automotive performance accessories company in California, on that company’s version of a 6.6-l Duramax diesel. The engine is in development, but initial press releases estimated its top horsepower will be 700 (522 kW), which suggests it has either a supercharger or turbo system. Contact Sweden Marinediesel, tel. +46 431 801 30; Performance Diesel Inc., tel. 281464-2345; Konrad marine, tel. 715–386–4203.