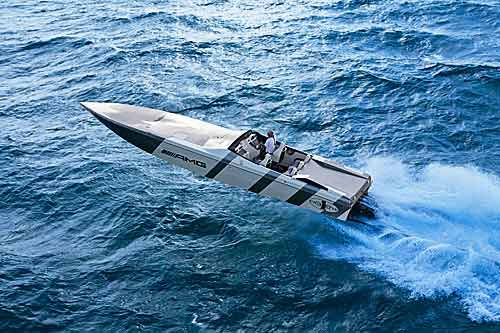 Transmissions are often overlooked when people start thinking about big power for their boats, whether buying something new or re-powering. For years, the high-performance transmission of choice was the Super Cyborg from BAM Marine, in Pompano Beach, Florida, but the BAM product maxed out at about 1,200 hp (895 kW) in terms of what it could reliably handle. 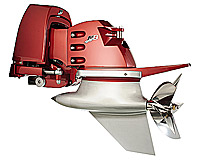 Because its new 1350 generates so much power, Mercury Racing realized it needed a new transmission to match up to its M8 drive.

Mercury Racing  knew that the BAM unit might have issues with the power, and especially the torque, of its new 1350 Twin Turbo M8 sterndrive, so it contacted Velvet Drive Transmissions, of Liberty, South Carolina, and the two worked together to develop the new 72L-HP transmission. Velvet Drive, building on the 72L technology, made the aluminum housing and internal components, while Mercury Racing focused on internal refinements and testing to ensure that the components could deal with the new engine’s output over the long haul.

“If you look at what’s in the market, there’s nothing that survives long term above 1,000 hp [746 kW],” said John Bolton, product manager for Velvet Drive and Richmond Gear, both divisions of Regal Beloit Corporation. 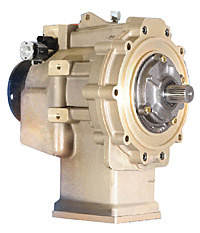 “You never even think about them,” said Bud Lorow, Cigarette’s longtime test-driver when asked about the 72L-HPs. “They’ve been nothing but bulletproof.”

While the Super Cyborg has 12 clutch plates to handle torque, the 72L-HP has 16 clutches and 15 full size steel plates, giving it the extra capacity (it’s 1½″/38mm longer), but the new transmission is more than just a bigger version. Velvet Drive beefed up many other internal components, including how the hub was retained on the input shaft. Lower-horsepower transmissions have a Woodruff-style key in the shaft to hold the hub, which rotates the clutch plates. The key is similar to the half-circle-shaped key that retains a water pump on an outboard motor’s lower unit vertical shaft. The key was replaced by a male spline cut as part of the shaft during machining. The male spline marries to a female spline broached onto the hub, eliminating the separate key that would have been a weak link in a high-horsepower application.

Velvet Drive also changed the material of the transmission drive gear to a proprietary hardened steel. During an FMEA (failure mode and effects analysis) review, the undercut in the old rolled spline was identified as a potential problem, so the new gear was cut with a gear-hobbing machine to eliminate the undercut. The number of splines on the shaft remains at 26, the industry standard for the dampers on the back of most V-8 engines.

The 72L-HP’s planetary gear system, which lets the transmission shift into reverse, was also upgraded with heat-treated steel gears; and Velvet Drive exchanged bronze bushings on the planetary for high-speed needle bearings.

To make rigging easier, the output shaft can accommodate a driveline or closed-coupling connection. Previously, a distributor had to stock one of each to make the correct link to the engine.

The 72L-HP has a 1:1 ratio, so any reductions are made in the drive. Because the unit’s internal sump is moved all the way forward on the housing, it can be mounted against a boat’s transom. It takes three quarts of fluid and is available in electric or manual shift.

Bring on the power.