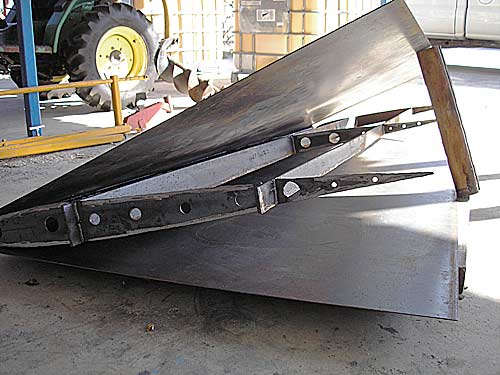 Reuel B. Parker (All)

Traditional centerboards, with few exceptions, are pie-shaped (triangular), and pivot from their forward lower corner. They typically have little or no foil shape. As long as they are located such that they maintain a proper center of lateral plane to complement the center of effort of the sail plan, they function adequately. Modern science, however, has revealed that traditional centerboards often make poor hydrodynamic foils. Indeed, daggerboards are much more effective as foils, but can’t be pushed up into their trunks when they hit underwater objects.

The modern fin keel represents the most efficient underwater foil shape known. Because foil shapes favor straight edges, and because wing shapes are more commonly rectangular than triangular, the traditional centerboard has largely passed out of common use.

Until recently, all my centerboards were made with solid wood cores covered with laminated marine plywood and finished with Xynole-polyester fabric and epoxy. We power-planed some foil shape onto the solid cores prior to sheathing, but the geometry required to maintain true foil shapes throughout the depth of the boards was impossible to maintain. The boards contained just enough lead ballast to overcome their buoyancy. These traditional-style centerboards did not add to the self-righting abilities of the vessels in which they were employed. I avoided heavier centerboards because they impose high loads on their trunks, keels, pivot pins, bushings, and lifting tackle. Boards that are only slightly heavier than water are easy to raise with simple tackle, and don’t require a winch. But for extreme shoal-draft hulls intended for seagoing, a heavy centerboard can add substantially to the righting moments of the vessel.

In 2003 I contracted for the design of a modern high-performance racer/cruiser, Australia 47 (14.3m), to be built in aluminum alloy. Because I had freedom to locate the centerboard trunk wherever I wanted it, I chose a centerboard that would act as a fin keel in the down position but would still retract upon running aground—a hybrid that combines the properties of the fin keel, daggerboard, and centerboard. This was inspired in part by a 19th-century Maryland Crabbing Skiff, whose model featured a rectangular centerboard that resembled a fin keel in the down position but still pivoted from the forward corner.

The Sharpie Book, Reuel B. Parker

It occurred to me that if this centerboard were lowered to vertical, and if it were shaped to a NACA foil, it would become a high-aspect-ratio fin keel. (It would also need to be shifted aft to maintain the correct center of lateral plane.)

The Australia 47 (14.3m), designed by the author and built in aluminum alloy with a centerboard/fin keel.

I chose a shape that would have a leading edge 15° from vertical, with a vertical trailing edge. I tapered the board thickness so that a NACA 0009 foil shape would be maintained throughout the height of the board.

The Australia 47 has a low-aspect-ratio fixed keel incorporating a delta-wing, through which the centerboard projects. I designed the new centerboard to be constructed in aluminum around two vertical struts and three foil sections. I used a pipe section for the bottom of the board to streamline it for abrasion resistance, and to reduce turbulence when partially lowered. I also used a pipe for the leading edge, to establish the constant-radius foil nose. The part of the board remaining in the trunk is rectangular.

Inboard profile of the Sharpie 45 (13.7m), showing centerboard and trunk location. The board is lifted with a 3,000-lb-pull (1,361-kg) all-terrain-vehicle winch mounted on an aluminum bracket on the back of the foremast tabernacle. The winch—fitted with ¼” (6.35mm) 7×19-strand stainless steel wire rope doubled using a traveling snatch block shackled to the end of the centerboard pennant—also raises and lowers the tabernacled masts. 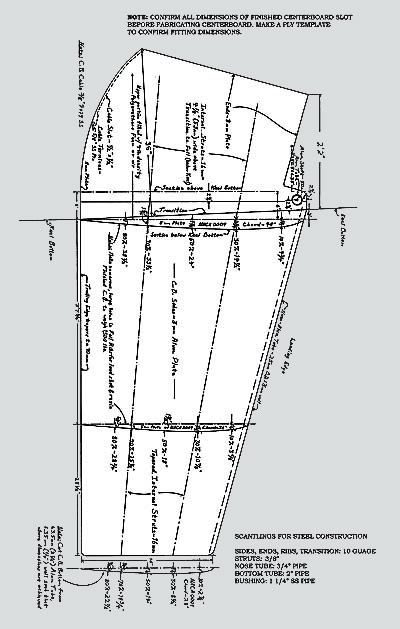 Foil-shaped centerboard (Sharpie 45SJI designed by the author) to be fabricated in aluminum or steel, and the lower portion filled with lead and polyester resin.

Several years later, in 2007, I designed a 45′ (13.7m) cold-molded plywood sharpie schooner, and decided to employ the new centerboard design so I could experiment with it firsthand. I chose 10-gauge steel for the skins, 3/8″  (9.5mm) for the struts, and schedule #40 black pipe for the leading edge and bottom. I used a gas metal arc (MIG) welder for assembly, and cut my material with a mini-grinder where straight, fine cuts were essential, and with an oxy-acetylene torch where rough cuts were acceptable. Dimensions are approximately 4′ x 8′ x 4½″ (1.2m x 2.4m x 114mm).

After extensive sail trials in the Gulf Stream and the Bahamas, I concluded that this new type centerboard is a success, and I have adapted it to many of my designs where the unusual shape and location of the trunk does not present a problem. Starting with the opening photo at the top of the page, you can follow my construction of the steel centerboard for my 45′ sharpie in the gallery below. 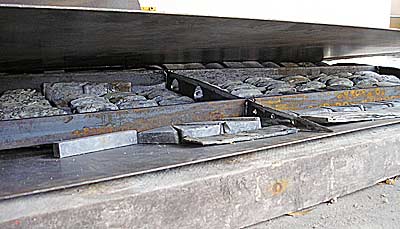 Inserting lead ballast prior to welding the fin’s sides closed. 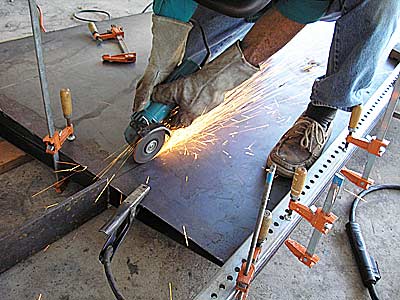 Using a mini-grinder to cut slots in the sides. The slots will be filled with weld metal to join the side plates to the center struts in a process called slot welding. 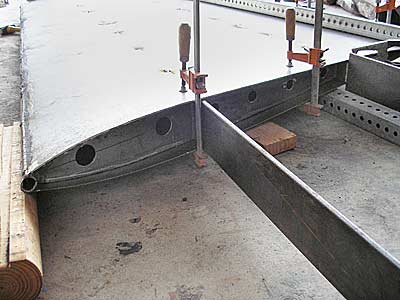 The fin halves are closed by slot-welding the sides to the struts. Note the two rows of slot welds on the top side. 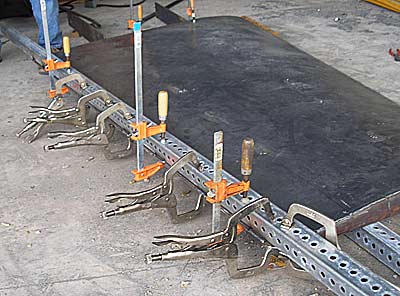 The trailing edge was the most difficult to weld. To avoid distortion, it was welded in segments before being continuous welded. 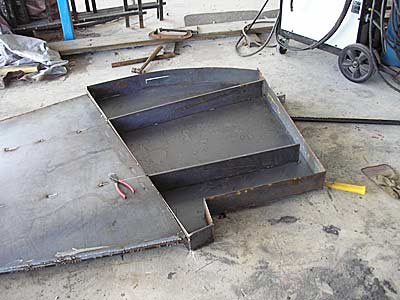 Forming the rectangular upper portion of the board. The lifting cable will attach at the slot cut at the back (top of photo). Note the slotted plug welds at left. 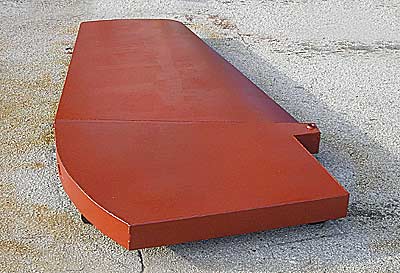 The board was sanded before being painted with epoxy primer (Sherwin-Williams SeaGuard 6000). It was then oriented vertically for infusion with polyester casting resin. Shown here is the finished fabric/epoxy-covered centerboard with the pivot pin bearing installed, at right. The board weighed 1,350 lbs (612 kg). 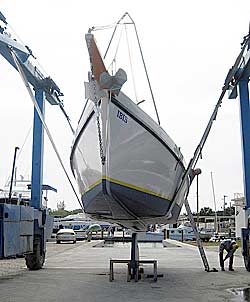 Lowering the hull onto the centerboard prior to launch. Note the wide box-keel.

For more information about
PARKER MARINE ENTERPRISES, click here for its Web site.