FB Design’s “water base” on Lake Como, in northern Italy, was a discontinued section of shore road that the production-powerboat firm’s founder-owner, Fabio Buzzi, bought and then converted into a discrete R&D facility for full-scale product testing.

It’s a man-made physical feature now visible to us from space, thanks to Google Maps’ images of northern Italy’s Lake Como.

What you see on the computer screen, though, is not readily understandable without a “ground truthing” experience that explains the satellite-derived photography. On the ground, in the town of Moregatto, you’ll see: a fenced-off property that includes an access road terraced into the mountainside at lake’s edge; a concrete dock (no floats) that follows the slight V-shape of the rocky shoreline there; and a converted tunnel with an adjoining concrete apron and turnaround. Taken together, these elements make up what FB Design refers to as its “water base.”

FB Design is the production yard founded by legendary raceboat designer/builder Fabio Buzzi, in 1971; his yard launches and hauls its line of high-performance powerboats and related gear at the Moregatto site to conduct full-scale testing. An important recent addition to the infrastructure at FB Design, this 64,583-sq-ft (6,000m2) waterfront base is a short drive from the yard’s inland production facilities in nearby Annone Brianza. Buzzi and FB Design are profiled in the October/November issue of Professional BoatBuilder magazine (No. 133). 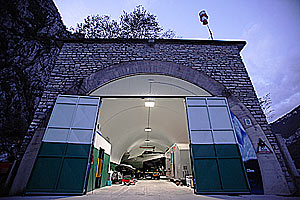 Besides deepwater frontage, Buzzi acquired a former highway tunnel with this property. In its new role the tunnel functions as a spacious—and secure—shop, primarily for on-site mechanical work.

Note again the term converted tunnel, above. Buzzi acquired an uninhabited stretch of two-lane blacktop—complete with tunnel for automotive traffic—that had been officially discontinued in the aftermath of a rockslide that buried the old roadway for a considerable distance beyond the tunnel. (The slide prompted district authorities to build a bypass.) For Buzzi, who has spent his 68 years in the Lake Como region, such occasional geological events literally come with the territory: the big two-pronged lake—a premier travel destination in a steeply sloped subalpine environment—is surrounded by mountains that, as Buzzi puts it, “plunge” into the water. He has always trialed his boats here. The difference now is that the Moregatto property gives him a measure of privacy he didn’t have before: it’s essentially a gated base of operations with deepwater frontage, enabling FB Design to prep raceboats and experiment with research projects free from industrial snooping. The Moregatto site may not be Lake X (Mercury Racing’s formerly privately owned body of water in Florida, reserved exclusively for secretive product testing), but in this part of the Old World, it’s about as close as Buzzi could get. Or afford. 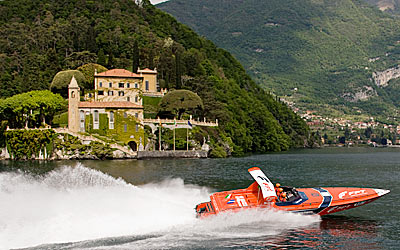 Buzzi’s venerable four-engine 47′/14.3m Cesa (currently competing as Red FPT), shown undergoing trials on the lake prior to the 2010 edition of the Cowes–Torquay offshore race in the UK, which it won.

With 80 patents to its name as part of FB Design’s ongoing commitment to R&D—a significant source of revenue for the company—Buzzi has plenty to be protective about. At Moregatto he installed a heavy-duty crane (made by a local manufacturer) to quickly lift a boat trucked from the yard and lower it into the water. FB Design’s largest production hull to date is an 80-footer (24m). Even though the yard can test scale-models in a new high-speed towing tank in front of its headquarters building, and can static-test boats and gear at full scale by suspending them in that same model basin, for Buzzi nothing compares to full-size trials in real-world conditions on his beloved Lake Como. As racing crewmate and marine journalist Dag Pike said of him in an earlier PBB article, “Buzzi is a perfectionist.” 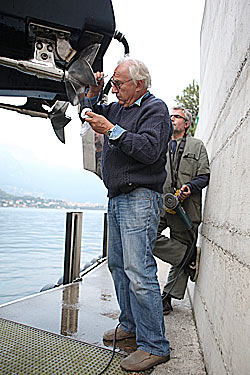 At the dock on a different day testing another FB Design boat, Buzzi marks the trailing edge of a prop blade as a guide for his chief mechanic, Antonio Binda. Portable grinder in hand, Binda will carefully remove the material indicated by Buzzi.

The tunnel was converted into a multi-use “building”: it contains a lockable shop for on-site mechanical work, and offers ample walkaround space to attend to whatever boat is the test base’s patient of the day. At the far end of this structure there’s now a well-equipped kitchen overlooking a simply appointed dining area. FB Design has used the facility for company-sponsored parties and picnics; and, if the base is not otherwise engaged, employees are permitted to run their own boats here on a weekend or holiday.

The tunnel’s exterior paint scheme, a semi-abstract rendering of the surrounding terrain, effectively camouflages the test base: it appears to blend into its actual backdrop when viewed from the water. Powerboating “scenes” painted on the interior walls in the kitchen/dining area help humanize that space, and complement cafeteria-grade furniture and appliances. Down at the bumpered dock, a smaller shop is stocked with a minimal inventory of tools and supplies for servicing boats during trials. 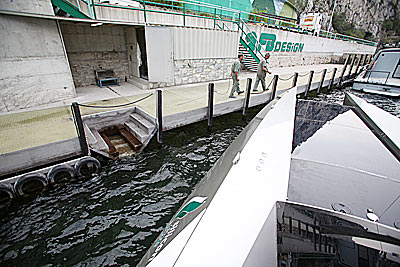 Code-X, an experimental 90-mph (144.8-kmh) 47′ (14.3m) cat designed and built by Buzzi’s yard, approaches the base’s concrete dock after a trial run on the lake. Click on “Batteries Not Needed?” in the articles archive of proboat.com for additional information about the boat.

I mentioned that the Moregatto base also tests gear. Here’s one example: Behind the tunnel, Buzzi showed me what looked like a variant of a fish-farm pen. Once deployed and anchored in front of the base, this rig provides FB Design with a subsurface platform for filming what happens to appendages (drives, props, rudders) when they hit an obstruction at high speed. Buzzi experienced that type of potentially disastrous accident not long ago: his four-engine 47′/14.3m offshore monohull Cesa (currently competing as Red FPT) ran over a World War II submarine barrier after the poorly planned start of the 2008 Round Britain event. As a result of the accident, Buzzi designed a reinforced rudder frame (losing a rudder meant losing an engine as well, since a pickup at the bottom of the spade rudder provides cooling water to the engines). Subsequent thinking also led to a rudder meant to shear a bolt that allows it to then pivot—thereby saving the rudder from severe damage upon impact.