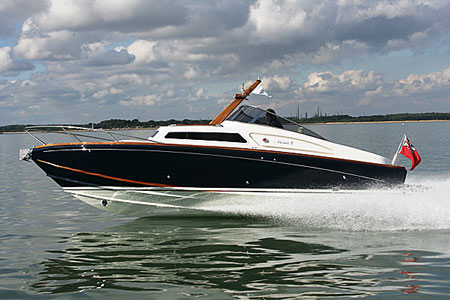 Levi Boat Company (except where noted)

A contemporary Corsair at speed. The 30-footer (9.1m) is a slightly enlarged and completely updated version of a successful production model designed in 1963 by the legendary Renato “Sonny” Levi.

Drawn in late 1963 by Renato “Sonny” Levi and currently produced in Italy, the composite-built 30′/9.1m fast cruiser we’re looking at here, called the Levi Corsair, has a pedigreed lineage.

Its parent hull was the beamier 30′ ’A Speranziella, a made-in-Italy one-off that Levi designed specifically for, and then drove in, the inaugural Cowes–Torquay Offshore Powerboat Race off the south coast of England 50 years ago this past August. (By adding a return leg in 1967, the race became, technically, the Cowes–Torquay–Cowes.) Levi drove his ’A Speranziella in the next two Cowes–Torquay events, winning it in ’63. The boat’s impressive performance in all three editions of this difficult race, despite incurring structural and mechanical problems during the first two outings, generated considerable international interest in Levi’s design talents. His remarkable portfolio from that period on—the Levi design studio is still active—will be presented in the February/March 2012 issue of Professional BoatBuilder magazine. 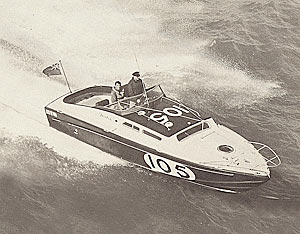 But let’s get back to the Corsair connection. ’A Speranziella spawned what Levi refers to as a “family” of related hull designs, mostly on commission and all actually built, several of which acquitted themselves at Cowes–Torquay and elsewhere on the European racing circuit. The principal feature of ’A Speranziella that caught the attention of prospective clients was her deep-V hullform. It was contemporaneous with, but differed from, C. Raymond “Ray” Hunt’s, the American designer usually credited with having pioneered the type. (A Hunt hull won the first Cowes–Torquay: a Christina 25 [7.6m] built in nearby Hamble by Bruce Campbell Ltd. See PBB No. 111, page 16, for an account of its ongoing restoration, plus a firsthand description of the inaugural race itself. The second Cowes–Torquay was won in a boat also created nearby, in Southampton, by famed designer/driver Peter Du Cane of the Vosper Thornycroft yard.) 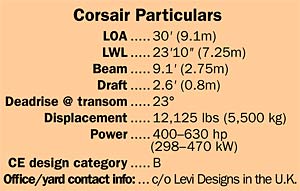 “The Levi Corsair was not designed purely as a racing boat, but as a fast, comfortable family cruiser that could also be used for occasional racing,” wrote Levi 20 years ago. “Quite a few of the early boats…took part in the Cowes–Torquay races.” The prototype was built of laminated wood for Bert Shead, father of British powerboat designer Don Shead; that vessel served as a plug for molds made by Viking Marine (Gosport, U.K.), which produced the Corsair with a single-skin sprayed-FRP layup. Interior joinery and overall finishwork were of wood, done by David Cheverton. “In my opinion,” continued Levi, “the Corsair was an outstandingly good-looking boat, a personal verdict confirmed when Farrant Gilliam’s won the Cowes–Torquay Concours d’Elegance on two occasions. She also won the production class in the 1966 Wills International Race [England].” 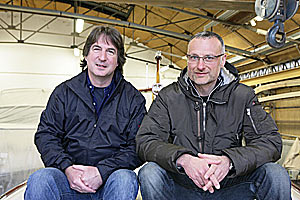 Martin Levi, at left, Sonny’s son, and Antonello Villa, right, co-founded the U.K.-based Levi Boat Company in 2000 along with Antonello’s brother Cesare. Corsairs are composite-built at a production facility in Italy, on the Venice Lagoon.

Knowing that background, Martin Levi, Sonny’s son, felt confident that the Corsair model, modified as needed, remained a viable candidate for today’s marketplace. It also helped that, unlike other designs of his father’s of that era, the Corsair had been produced in glass. In 2000 Martin started the Levi Boat Company with Antonello and Cesare Villa. They manufacture the Corsair in collaboration with Gilberto Crosera, owner of the Cantiere Nautico Portegrandi Marina & Service srl, whose yard is located on the Venice Lagoon in Italy, at Casale sul Sile. Martin purchased a surviving glass Corsair hull that was then tweaked and to which the Levi Boat Company added new deck, cockpit, and cabin molds. These were built with modern composite materials and methods (including PVC sandwich construction for the hull topsides and deck). The company updated the layout, interior appointments, and systems; and changed propulsion from gas engines to efficient compact diesels with outdrives. The new, restated cruiser is capable of 50 knots, while delivering a dry and comfortable ride—given other than traditionally rough Cowes–Torquay race conditions. 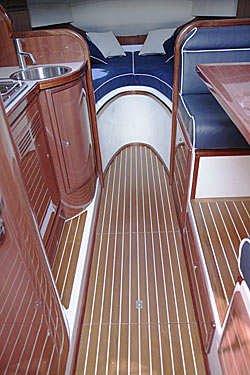 Looking forward in the handsomely finished interior of a new Corsair. The arrangement is generally consistent with Sonny’s original drawings, but everything from mechanical and electrical systems to cabin furniture and deck gear has been upgraded within a now-classic envelope.

Offered as a limited-series product since 2002, the Levi Boat Co. version of the Corsair has been favorably reviewed in the years since, in the British and the Italian boating press and, in the United States, by The Robb Report—a luxury-products title presumably attracted to the affluence suggested by Sonny’s lifetime client list. The company also markets a commercial version; that is, a stripped-down cabin model suitable for patrol or police duty. At the beginning of his lengthy marine career, Sonny did much the same thing with new-build projects he directed at yards in India and Italy where he’d been the resident designer; meaning, those cabin cruisers too were generally given recreational and commercial interchangeability. Martin and the Villas also prepared plans for a runabout-style 30′ launch on the same lines, but have postponed tooling for it until the economic climate improves. 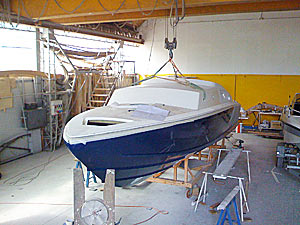 A freshly molded one-piece deck structure is lowered onto the hull. Both major parts are PVC cored; the bottom is single skin.

To many American eyes in the 21st century, the waterline elevations of the Levi Corsair motoryacht may seem, well, a bit strange. Probably because our impression of a hot early-’60s power cruiser was formed by the iconic Moppie-derived Bertram 31′/9.4m, with its flatter sheer and Detroit-station-wagon styling. In the south of England, however, where Martin and Sonny reside (the latter for just part of the year), the Corsair’s styling is considered classic. Not only did much of the field at Cowes–Torquay during the early ’60s carry similar superstructures (for several years the race rules specified some form of cabin) on a pronounced reverse sheer, but numerous other motor cruisers of that time and place—particularly those produced by the Fairey Marine plant in Hamble—now enjoy collectible status, along with British sports cars of the same generation. 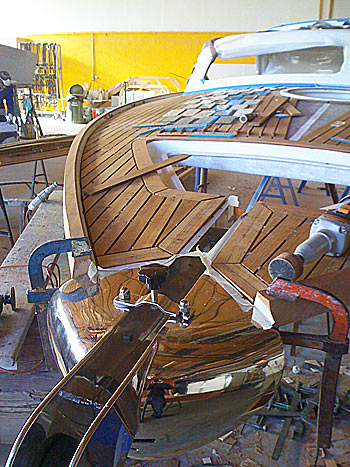 As with the interior treatment, wood joinerwork enhances a new Corsair’s deck. Levi Boat Company also sells a more prosaic commercial edition of the Corsair for patrol and police applications.

Photos of the Levi Corsair reveal a basic uncomplicated layout that was deemed sufficient in ’63 and still is: helm and nav stations (helmsmen customarily drove such boats standing up, not unlike center-consoles that had yet to appear on the market), berths for four, galley, dining area, and enough deck space to safely manage ground tackle and docklines. One obvious concession to modern trends is the Corsair’s sunpad over its engine hatches.

As for running shots, those speak for themselves: what we see is a highly respected Sonny Levi deep-V, in stop-action.