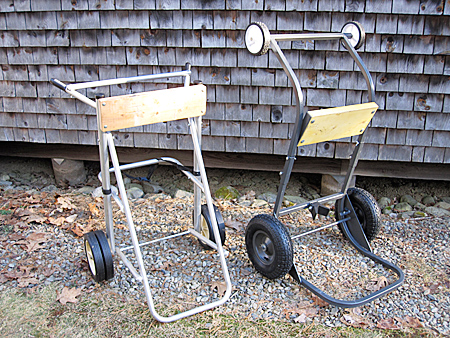 A conventional outboard-motor carrier, on the left, alongside an Easy-Motor-Toter developed by Hollins Industries, a British Columbia company. Inventor Bryant Hollins, originally trained in yacht design, said that an overhead-crane scale in his shop tested the ergonomic EMT “frame with motor board, to a weight capacity of 3,000 lbs [1,361 kg]” before the onset of any structural deformation.

Candidate products from a variety of vendors competing for innovation awards at IBEX—the annual marine-industry trade show held last fall in Louisville, Kentucky—were arrayed on and around a draped, multilevel display island centrally located in the rear of the show’s huge exhibit hall, just beyond the floor plan of vendor booths. You might think such a spot, far from the foot traffic near the front entrance, is out of the way, but in fact this eclectic new-products exhibit attracted a considerable number of IBEX attendees.

By late December the trade press was reporting the winner in each of 10 product categories ranging from safety equipment to propulsion parts, as chosen by a committee of boating writers. Consistent with current trends in consumer goods and appliances, much of the winning gear at IBEX boasts advanced electronics in one form or another: touch-screen controls, say, or apps that link to a smart phone or other mobile device. (For a complete list of winning companies by category, see the January 2012 issue of Soundings Trade Only.)

There was, however, a candidate product at the innovation-awards table that commanded interest despite the total absence of electronic enhancements. It was a clever redesign of the conventional approach to outboard-motor carriers—wheeled motor stands made for manually moving small and midrange outboards demounted from their transoms.

Granted, we’re talking about a humble tool with little to no sex appeal: a special-purpose hand truck. Nevertheless, a motor carrier is an essential piece of gear at every yard, marina, or dealership that stores and services powerboats—many of which wear get-home kickers—along with outboard-powered tenders to large yachts and sailboats with auxiliary outboards.

The particular carrier on display at IBEX ’11 goes by the name Easy-Motor-Toter. Its inventor is Canadian Bryant Hollins, who began his professional career as a yacht designer but shifted early on into the wood-products industry, applying his engineering skills to designing and building custom sawmill equipment. Hollins Industries International, the company he and his wife started in 1989, supplies commercial sawmills throughout North America.

In 2008, at age 66, Hollins found himself frustrated by the effort needed to manhandle a 15-hp (6.8-kW) four-stroke Yamaha off his 11′ (3.3m) Zodiac, and then load it into the bed of his pickup—using a conventional motor-carrier whose basic design had not changed in decades.

Such carriers originated at a time when nearly all outboards were two-strokes, and thus significantly lighter in weight than their four-stroke counterparts that now dominate the marine marketplace. Secondly, these older-style carriers appeared when outboard boats, and their motors, were generally smaller than those produced today. Third, a large percentage of that older population of outboard boats could be powered with short-shaft lower units, whereas today’s boats from 16′ to 17′ (4.9m to 5.2m) and up typically require a long-shaft motor, which adds to both the weight and difficulty of moving one around. Finally, apart from the occasional mechanically minded yard operator who has decided to make a shop-built carrier, no one came along—until Hollins, apparently—to challenge existing thinking on motor carriers.

Back at his shop, Hollins had his ideas for a better carrier fabricated into a working prototype that he then showed to Pierre Dion, the boat-and-motor dealer down the road where he’d bought the Zodiac and Yamaha. Dion’s dealership (Exeter Forest & Marine, in 100 Mile House, British Columbia) promptly ordered 10 of Hollins’s carriers, effectively launching the Easy-Motor-Toter brand.

Hollins, with input from Dion, further refined his carrier’s features, with an eye toward faster fabrication and greater economic viability. He also filed for a patent, which was approved and registered this March.

Virtually all conventional carriers on the market are manufactured from tubular aluminum or steel and tend to feel underbuilt, underbraced, and therefore unsteady once loaded near their maximum limit and under way. By contrast, Hollins opted for a coated, beefy, bent-steel frame—a thick-walled 1″-square (6.4cm2) cross-section—reinforced with a steel-plate gusset in the critical axle-area for extra rigidity.

Most conventional carriers are equipped with single or dual semi-pneumatic tires whose tread resembles a touring bike’s. For his carrier, Hollins specified large-diameter (1′/30.5cm) heavy-duty inflatable tires with an aggressive off-road tread, plus small, smooth semi-pneumatics on the ends of the handle to facilitate rolling a loaded carrier directly into the back of a pickup, SUV, van, or compact station wagon.

Generic carriers, whose handlebars angle outward, take up a lot of space in the upright storage position. Hollins’s carrier, at about 28″/71cm maximum width and meant to fit within the confines of a vehicle, is no wider than its own footprint and, when empty, can be folded back on itself, as if touching its toes, to conserve storage space. (At least one carrier-maker offers a model, its largest, whose handle ends unbolt to fold down, but the joint location, under load, may compromise the operator’s physical security.)

A hard-rubber V-block bolted to a cross-member on the Easy-Motor-Toter captures the outboard′s lower unit.

At IBEX ’11, it wasn’t Hollins who exhibited the Easy-Motor-Toter, but Mattias Brundell, owner of Brunco AB, a firm based in Gavle, Sweden. Brunco—Hollins’s sole licensee—is manufacturing the Easy-Motor-Toter in China “in close cooperation” with Klovenas Steel & Trade AB, a subcontractor to Scania Trucks and also a supplier of high-end excavation parts for a Swedish earth-moving contractors association. Besides providing quality control, this cooperative production arrangement contributed additional touches to the Easy-Motor-Toter: a simple but sufficient brake (a sliding bolt that engages a disc of potential slots affixed to the inside of each big wheel); development of a carrier suitable for both long- and short-shaft engines; and improved foldability.

According to Brundell, Hollins sold the sawmill-related business in 2010 but kept the motor carrier out of the deal; Hollins plans to continue to produce brake-less versions of the Easy-Motor-Toter for his home market of Canada. (Among conventional carriers, brakes are rare to nonexistent.) Hollins’s carriers will be assembled there with raw material he stockpiled before selling his company.

Although you can buy conventional motor-carriers allegedly capable of moving motors as heavy as 315 lbs (143 kg), I find from experience that a short-shaft four-stroke motor at just half that weight is an absolute bear to move over uneven terrain with a tubular-aluminum Garelick dual-wheel carrier, arguably the industry’s longtime leader in this product niche. Hollins and Brundell are playing it safe: their stated safe working limit for an Easy-Motor-Toter is 187 lbs (85 kg), which covers most versions of contemporary four-strokes up to 25 hp (19 kW).

I took the opportunity to test-drive, as it were, one of two Easy-Motor-Toters that Brundell brought to IBEX ’11; it was supporting an 18-hp/13-kW Yamaha. (His other Easy-Motor-Toter was on display, minus a motor, at the show’s innovation-awards island.) Granted, I jockeyed the Yamaha around a level, indoor, carpeted environment. Still, compared to the tubular steel/aluminum competition, Brundell’s carrier had a substantial feel, which I attribute to Hollins’s expertise at developing rugged gear for the sawmill trade. (I spent nearly two years in sawmills both large and small, working with log-and-lumber machinery, tools, and equipment. Hollins’s business history alone suggests he well understands what it takes to move heavy, ungainly objects.)

Finally, I’m obliged to disclose that the Easy-Motor-Toter failed to win an IBEX innovation award. It would have got my vote, though—if I’d been on the awards committee.

Note: For inquiries to Mattias Brundell, e-mail info@nullbrunco.se; for Bryant Hollins, e-mail hollins@nulleasy-motor-toter.com. Be aware that other, unrelated products carry “motor toter” in their names; the item discussed here is hyphenated, and starts with “easy.”
—P.L.