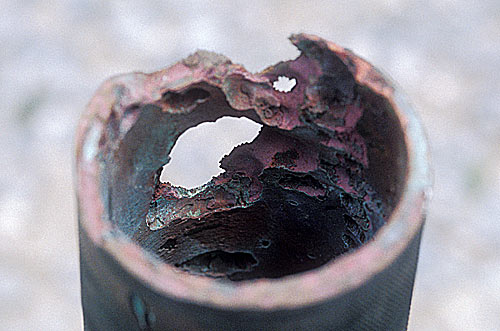 Not all copper alloys are created equal, so it’s important to verify their composition when using them in raw-water applications.

A colleague recently described to me the unusual loss of a large, relatively new motoryacht that sank at the dock as a result of a failed raw-water plumbing fitting in its HVAC system. The fitting, which had been installed by the builder, was made from brass. On the strength of the contract’s “corrosion exclusion,” the owner’s insurance company refused to pay for the loss. The owner filed a suit against the insurer, and lost. Setting the legal drama aside, the anecdote is a reminder to builders and service yards to beware of brass when selecting or replacing below-the-waterline marine hardware.

Brass is an alloy of copper, and copper has been a boatbuilding material for centuries, most notably as cladding on hull bottoms to keep teredo worms out of the timbers, and as a natural antifoulant. It is an excellent biocide, which contributes to its popularity for plumbing in onboard freshwater systems. Also, copper pipes are opaque, which denies plant-based biological growth the light necessary to proliferate.

In some engines, copper pipe carries raw water to and from cooling pumps. This usually works well, although the tubing is often of proprietary alloys and shapes, which can be expensive and difficult to source. Additionally, copper is susceptible to two forms of corrosion likely to be seen aboard seagoing vessels:

Brass, a metal that is almost synonymous with the sea, is actually a family of copper alloys whose primary ingredients, in varying ratios, are copper and zinc. In fact, some brasses are composed of as much as 50% zinc. Some of the more common “seagoing” brasses are: red brass with 85% copper, 15% zinc; cartridge brass, 70% copper, 30% zinc; Muntz metal, 60% copper, 40% zinc; admiralty brass, 70 copper, 30% zinc; naval brass, 60% copper, 40% zinc; aluminum brass, 76% copper, 22% zinc, 2% aluminum; and finally, manganese “bronze,” 60% copper, 40% zinc. Manganese bronze is bronze in name only; because of its zinc content, it resides squarely in the brass family. 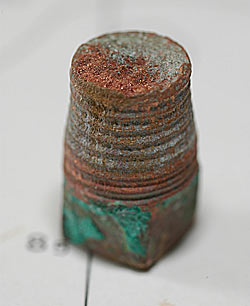 Regardless of labeling, pipe fittings smaller than ½” (12mm) are often brass rather than bronze. Sourcing these components in bronze is often challenging.

While brass has many familiar uses aboard—from clocks and joinerwork trim to lamps and electrical components—it should never be used in raw-water applications. It’s worth noting that many small (1/4″–3/8″ NPT) plumbing fittings, such as pipe-to-hose adaptors, pipe plugs, and bushings, are made of brass, while their larger cousins are bronze. Although most bronze seacock and sea strainer drains utilize 1/8″ NPT plugs, under no circumstances should these be replaced with brass. Appropriately sized bronze plugs can be obtained from the equipment manufacturer. And if you’re unsure of the plug material, avoid using it below the waterline or in raw-water applications. Another location where brass is often inadvertently used is in water injection ports on stuffing boxes. These frequently call for a threaded pipe-to-hose adaptor of 1/4″ or 3/8″.

In my experience, many chandlery clerks and marine equipment vendors cannot be relied upon to provide accurate alloy information. Many are unaware of the important distinction between brass and bronze, and prohibitions for use of the former in raw-water systems. It’s up to you to know that if you replace a lost or damaged bronze plug with a brass one, you may suffer the consequences.

What’s Behind the Weakness

Why is brass so susceptible to corrosion?

Because many brass alloys contain a substantial amount of zinc, they are especially susceptible to “dezincification,” whereby the zinc selectively corrodes and leaves a porous copper shell that retains its shape but has little strength. A dezincified brass propeller, for instance, can be identified by its splotchy reddish or pink coloring. Many propellers (and propeller nuts) are fabricated from so-called manganese bronze, a brass alloy, and as such are especially susceptible to dezincification. That’s why it’s so important to protect this often-substantial investment with sacrificial anodes, and to vigilantly monitor and renew them when necessary. In a conventional assembly, which combines a stainless steel alloy shaft and a brass (manganese bronze) propeller, once the anode is gone, the metal most likely to corrode is the prop. Besides dezincification, brasses are susceptible to other forms of corrosion. Ammonia, a common ingredient in household cleaners, will readily attack brass, causing it to weaken and crack; and mercury will do the same. 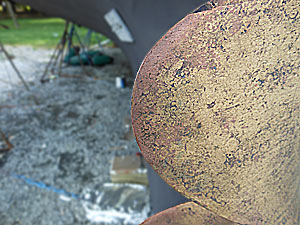 By definition, brass alloys include zinc as one constituent element. When that zinc selectively corrodes, in a process known as dezincification, it is easily identifiable by the pinkish hue of the copper left behind.

Bronze, although it’s a copper alloy, is different from brass in that it’s free of any appreciable amount of zinc, and so is not susceptible to dezincification. Bronze’s parent alloying element is copper, but its primary alloying element is tin. As a result, pound for pound, bronze is often more expensive than brass, which contains less costly zinc.

Gunmetal, as its name suggests, was employed in firearms manufacture. It is a bronze alloy of 88% copper, 10% tin, and 2% zinc. It is not especially strong, but it is corrosion resistant and perfectly acceptable for below-the-waterline use. It is often cast into items such as cleats, chocks, and shaftlogs. 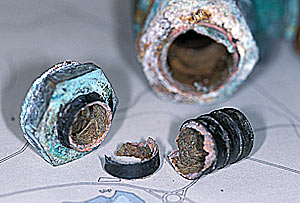 This pipe-to-hose adapter on a seacock failed as a result of dezincification. Fortunately, the failure occurred during winterization, after the vessel had been hauled.

Another bronze alloy, aluminum bronze, is strong but susceptible to de-aluminification. This vulnerability is avoidable with the addition of nickel. The resulting strong, corrosion-resistant alloy, typically called nibral (nickel, bronze, aluminum), is often used to make propellers. Prop repair shops sometimes charge a premium for reworking nibral props due to the metal’s tendency to take on a set, or memory. Manganese is sometimes added to this already complex soup of metals to further increase strength.

Silicon-bronze is by far the most popular alloy for underwater hardware, including seacocks. It is 96% copper, the remainder being silicon and other trace elements—sometimes very small amounts of zinc, often measured in single percentage points. Bronze hardware such as nuts, bolts, and screws is often made of this alloy and can be expected to give long, corrosion-resistant service.

Phosphor bronze is typically made up of 85%–95% copper and 5%–10% tin, with the addition of a small amount of phosphorous, which improves the hardening characteristics of the bronze, making it a good choice for bearings and springs.

Above all else, remember: particularly for generic plumbing components, brass is ill-suited for any application where it’s called upon to convey, direct, or stem the flow of seawater, regardless of whether it’s used above or below the waterline. This includes plumbing associated with raw-water strainers, stuffing boxes, seacocks, and sanitation and air-conditioning systems. Your clients rely on you to know what materials are suitable in which applications. While brass, bronze, and similar alloys may look the same, that’s not a defense you’ll want to rely on if you have to explain a catastrophic failure.

About the Author: For many years a full-service yard manager, Steve now works with boat builders and owners and others in the industry as “Steve D’Antonio Marine Consulting Inc.” He is the technical editor of Professional BoatBuilder, and awaits publication (by McGraw-Hill/International Marine) of his book on marine systems.