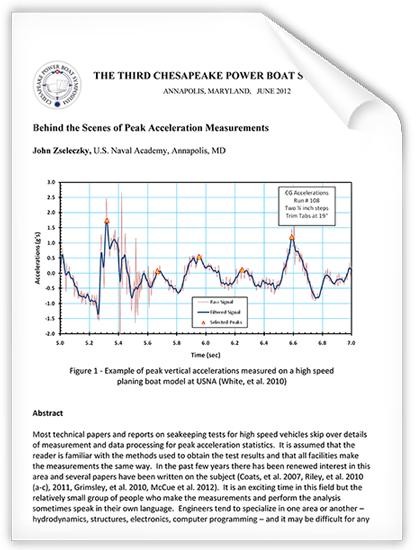 Title page of one of many technical papers presented at the 2012 edition of SNAME’s Chesapeake Power Boat Symposium, held this past June in Annapolis, Maryland. Each paper was distilled into PowerPoint slides formatted by its lead author, who summarized the paper’s contents onstage to attendees, before fielding questions from them.

The Chesapeake Sailing Yacht Symposium is approaching age 40. Its younger counterpart, the Chesapeake Power Boat Symposium, just turned four. Each event takes place in Annapolis, Maryland, in alternate years; both are organized and produced by the local (Chesapeake) chapter, or section, of the New Jersey–based Society of Naval Architects and Marine Engineers, better known by the acronym SNAME.

Professional BoatBuilder has reported on selected papers presented at these symposia, and became a principal sponsor of the powerboat version, generally referred to by its initials and year. I’ve attended CPBS 2010 and 2012 on behalf of the magazine; editor-at-large Dan Spurr represented us at the inaugural edition, in 2008 (see his follow-up article in PBB No. 116).

CPBS is modeled on CSYS, whose steering committee, early on, decided to emphasize sailing-yacht technology, which in turn has attracted not only designers and engineers but technically minded sailing enthusiasts from around the world. In this part of the world (the United States), over the life span of the two symposia, powerboats have outsold sailboats by a ratio of more than 20:1. And although there are technically minded powerboating enthusiasts, CPBS seems to draw almost exclusively on the design-and-engineering community, principally in the States and secondarily worldwide.

Many CPBS attendees have advanced degrees and/or Professional Engineering licenses. The latter detail is not merely demographic; it helps ensure attendance because most of the papers presented at CPBS “qualify for SNAME Continuing Education points.” Engineers with “PE” after their names must continue to educate themselves at certifiable venues in order to retain the license.

One of those venues is IBEX, the PBB-founded and co-produced 20-year-old annual marine trade show and conference, which features a technical seminar program. But even though several regular presenters at CPBS often serve as speakers or panelists at IBEX, the two programs differ in style and content. Since many of you reading this have been IBEX-goers only, a closer look at CPBS 2012, held in June, will reveal what is different about it.

The setting for CPBS is a modern, well-equipped auditorium on the campus of St. John’s College. By well-equipped I mean a generous amount of amphitheater seating, a stage with full-length screen, and a control booth for audio and visuals. Attendees spend a long two days in that auditorium. Sessions start at 8 a.m. and run straight through until 5 p.m. each day, with a lunch break at midday and a short break during midmorning and midafternoon. This year there were 10 sessions on the first day and 11 on the second. Unlike IBEX, CPBS is strictly conference; there is no exhibit hall with vendors to the trade.

Similar to IBEX, PowerPoint software predominates. CPBS steering-committee members take turns serving as moderator. They introduce the speakers—typically, a single speaker per session, for which there is an accompanying technical paper. If the paper has multiple authorship, the lead author usually does the presentation, armed with a remote to manage the PowerPoint.

So-called handouts for IBEX technical sessions are entirely optional and generally consist of a printout of the PowerPoint slides; there is no “paper” as such. By contrast, CPBS attendees receive a digital file of each paper, rather than the PowerPoint distillations of those papers. Collectively, the papers comprise the proceedings for the symposium. Papers follow a standard academic monograph format, namely: title, author(s) with professional affiliation, an abstract, any notation or nomenclature peculiar to the topic, the body text along with graphs and equations and perhaps additional illustration, a summary or conclusion, acknowledgements, bibliographic references, and appendices if any. The text of every paper is rendered in third-person passive voice.

Questions from the CPBS audience are withheld until the end of the PowerPoint presentation, at which time they’re actively encouraged. Though individual presentations vary in length, Q&A is limited by the symposium’s need to stay on schedule.

CPBS 2012 divided its papers into five categories, which were presented in discrete blocks: resistance and propulsion; dynamics and testing techniques; numerical analysis and computational fluid dynamics; design and production; and seakeeping. The latter two blocks were the largest on the program, and seakeeping was arguably the hottest, as interest in this subject has been steadily growing over the course of the three editions thus far of CPBS. At CPBS 2012, seakeeping papers spanned the entire afternoon of day one. The titles alone of papers presented in this segment suggest the trend of current investigations: 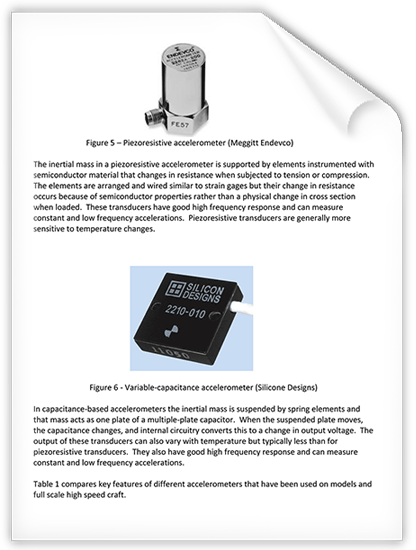 Page 6 of John Zseleczky’s representative paper (not his PowerPoint) at CPBS 2012, in which he discusses instrumentation options for measuring accelerations. A registered Professional Engineer and frequent presenter at these SNAME-section symposia in both power and sail, Zseleczky runs the model basin at the U.S. Naval Academy, in Annapolis. 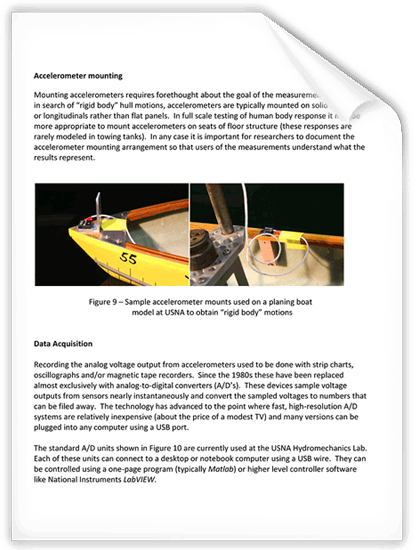 Page 10 of Zseleczky’s paper, showing how one type of accelerometer is mounted on a scale model to record “rigid body” wave impacts—meaning, accelerations affecting the hull only (versus structure and/or occupants).

All the papers listed above, involving the nonlinear dynamics of wave impacts on model- or full-scale powerboats moving at high speed, contain a considerable amount of math, much of it expressed in the form of complex equations. Displayed on a theater-size screen, such equations literally appear larger than life—and thus intimidating to those who never formally studied the science of engineering.

One hazard of this type of program is that it tends to attract a few show-offs. As presenters they’ll flash a wicked volume of math on screen (at CPBS 2010, one academic researcher put up a slide with a single equation that started at the far left, traveled across the stage… and continued into the following slide); or as members of the audience, they’ll pose a question in such a way as to let everyone in the auditorium know that they’re the smartest guy or gal in the room.

Note the last title in the list above. That paper generated a great deal of curiosity in the assembled crowd, not so much for its practical applications, which have yet to be fully realized, but because it vividly demonstrated mathematics gone wild. In simple terms, algorithms (as defined by Webster’s) are a step-by-step procedure for solving a problem; genetic algorithms, a new class of algorithm made possible thanks to today’s massive computing power, reproduce themselves, and mutate. By way of a graphic example, the paper’s principal author and presenter had embedded in his PowerPoint an animated cartoon of a wheeled vehicle rolling along near the bottom of the screen. As the “car”—childlike in its depiction—encountered sharp peaks and deep valleys in its path, it would flip over at the obstacle and assume a new configuration. This was actually a program the author set running, that would modify itself—mutate—in an effort to solve a given problem. For purposes of the presentation, the demo algorithm was trying to create a notional vehicle able to negotiate the rough terrain imposed on it by the programmer.

Upcoming issues of PBB, Nos. 140 and 141, will feature significant research that has appeared at CPBS (and elsewhere) under the subject heading of seakeeping. The PBB articles will attempt to discuss accelerations, and their effect on hull design and structure, in plain English and with less math. The material won’t be dumbed down; it will simply be made more accessible to more of our readership beyond the naval architects/marine engineers on the magazine’s subscription list.