Recently we heard from a fellow in Australia who has been experimenting with a somewhat radical hull surface. A welder by trade, Roger Mutimer says he has been designing and building aluminum boats for many years; they range in size from 13′ to 75′ (4m to 23m). Here’s what he had to say:
I just subscribed to Professional BoatBuilder and wanted to let you know what I have been trying to do in Australia. My passion is designing and building aluminum boats. My latest project is a new hull design for powerboat racing. This aluminum hull is fully aerated and can be used on any powerboat design. My concept is not to try to get the hull out of the water, where you have no control, but to keep the hull on the water and use its movement over the water to draw air in so as to create a completely aerated hull.

The problem I find with the stepped-chine racing hull is that everything stops at the step. So when it comes down and hits the water, the water hydraulics up into the step, forcing the hull to go in the opposite direction.

My theory is to have a lot of small steps over the hull to overcome that problem. All trailing edges plus planning strakes are sharp enough to cut your finger on. 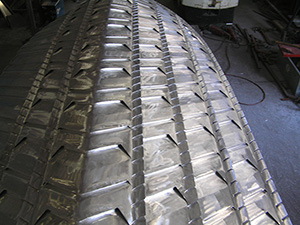 Looking a lot like a cheese grater, the surface of Mutimer’s aluminum hull has numerous mini-steps.

My next test was doing a vacuum test because I came to realize that I wasn’t getting enough air under the hull.

I have been working on this hull concept since 1990, but it has only been in the last four years that I have decided to do something about it.

Mutimer performed a vacuum test to determine drag, which he concedes is “a fair bit.”

Mutimer is interested in hearing what PBB readers think of this concept, and how he can improve on it. Please share your thoughts with editor-at-large Dan Spurr at dan@nullproboat.com.

About the Author: Dan Spurr is Profes­sional BoatBuilder’s editor at large.