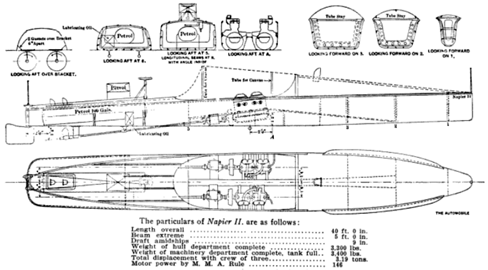 Drawings and particulars for Napier II, circa 1905.

Maryland-based consulting naval architect William Hockberger said he was “searching for something else” last August when he stumbled on “a paper read before the Institute of Naval Architects, in London, in 1906.” Hockberger had found this particular monograph—“Design and Construction of Auto Boats,” by James A. Smith—buried in a once-popular but long-defunct weekly periodical called The Automobile, published in New York City and later bound in a single volume spanning the period January to June of 1906. Eleven-hundred-plus pages of newsprint—now property of the University of Michigan library system—had been digitized by Google. That conversion enabled Hockberger to e-mail Word and PDF files of his find to naval architect and friend Donald Blount, with the comment: “Maybe nothing new or interesting to you, but the kind of source it is makes me think it’s pretty obscure and probably something you haven’t seen.”

For Blount, Hockberger’s mailing provided a missing link. Arguably this country’s preeminent powerboat designer and engineer, the Virginia-based Blount has been researching and writing a book on the “hydrodynamic technology of high-performance craft under power.” Professional BoatBuilder readers were treated to a preview of the book’s first chapter when we published an article, “Original Speed” in PBB No. 113 (June/July 2008), that analyzes the first generation of vessels to escape displacement speeds. In all cases, their motive power was massive triple- or quadruple-expansion steam engines. Smith’s 1906 paper, Blount said, could serve “as an epilogue to ‘Original Speed.’ It presents information I had not seen about changes from round-bilge to hard-chine hullforms, and techniques for construction and structures, during the early 1900s, when internal-combustion engines were replacing steam.”

Before taking a closer look at Smith’s article, let’s place it in the larger historical context where Hockberger found it. The Automobile was a niche publication aimed at an audience that included owners, engineers, inventors, and manufacturers. This readership was international, primarily American, British, and French, reflecting those nations where automotive development was hot, although the vehicles themselves were still relative novelties—so much so, in fact, two-car collisions were a rarity. That year, The Automobile tallied no more than 3,000 cars and light trucks in the Los Angeles area; fewer than a thousand in the State of Maine.

The Automobile regularly reported on the week’s notable hill climbs, rallies, measured-mile races on sandy beaches, or distance races held on unimproved rural roads. This crowd is referred to as automobilists; they wear dusters (most vehicles of the day sport open seating), and drive runabouts or touring cars, or racers reduced to their chassis and running gear. It’s a fast-growing community of enthusiasts organizing and erecting clubs, much like yacht clubs and often similarly posh. In addition to club news we get trade news: repair and storage garages opening for business; another car company entering the marketplace (Henry Ford counted at least 135 American automobile manufacturers that year alone). We also get patent news, complete with the drawings submitted to the U.S. Patent Office, articles introducing new and unusual technology (air-cooled engines, two-cycle engines), articles explaining the basic workings of essential parts and systems (ignition, clutch, brakes, suspension), articles about how to operate and maintain these machines.

Lines of a 1930 lobsterboat designed and built by Will Frost.

Scattered throughout the pages of The Automobile we also get novel applications of the technology: two cars towing a large human-steered box kite (it crashed); an automotive engine failing to fly an aeroplane built in the bizarre shape of a double lozenge (it crashed and killed its pilot). Like flying machines, boats were considered a novel application, hence auto boats, a term soon to be replaced by motorboats. We’re 831 pages along in this volume of The Automobile when Smith’s technical article on auto boats appears. He presents drawings of two as examples of the type: the first is the 140-hp (104.4-kW) twin-engine 40′ x 5′ (12.2m x 1.5m) Napier II, named after the engine supplier and built by Yarrow and Company, a British firm we met in Blount’s article on steam-powered speedsters. The second boat shown in Smith’s paper is a single-engine craft of much more moderate power (39 hp/29 kW), with little discussion by Smith and lacking sectional views.

“In Napier II,” Smith writes, “a new form of hull has been adapted consisting of an after-body of usual form, a flat midship section with slightly rounded bilges, and an inclined plane forward from about a third of the length from the stem, meeting the water line at the stem; the object being to cause the fore part of the boat to lift out of the water, and thereby lessen the skin and wave resistances. Very satisfactory speed results have been obtained from this boat, and a second boat of similar design, Yarrow-Napier, has been built. Although it is difficult, from a mechanical standpoint, to estimate the advantages to be gained by the adoption of this form, there appears to be little doubt that the ‘skating’ effect has been achieved.” The term planing had not yet entered the lexicon of fast-powerboat design.

As to “the amount of flat bearing surface required to prevent excessive change of trim,” Smith writes, “generally speaking the form of this bearing surface is of more importance than its extent, as boats which have been designed for one power have afterwards had their motors replaced by others more than twice as powerful without showing excessive change of trim under way.”

Regarding construction, Smith notes that although “Napier I and Napier II were built of steel, it has been found that steel is an unsuitable material for light high-powered boats under 50′ [15.2m] in length […] Considerations of weight and expense tend largely in favor of wood in the construction of such boats. The weight of hull of Napier II was 1.47 tons for 140 hp, but a similar hull of a suitable wood construction need not have weighed more than 1,120 lbs [508 kg] complete.”

Smith goes on to describe several candidate types of wood construction suitable for fast launches, starting with conventional carvel planking, but preferring double- or triple-skinned hulls, “with or without timbers.” He also discusses a “ribband-carvel” system, and even a system of four or five skins “of very light veneer sewn together with copper wire”—a forerunner of today’s stitch-and-glue plywood or cold-molded construction, minus the adhesive. The engine girders are incorporated as the principal longitudinal members. 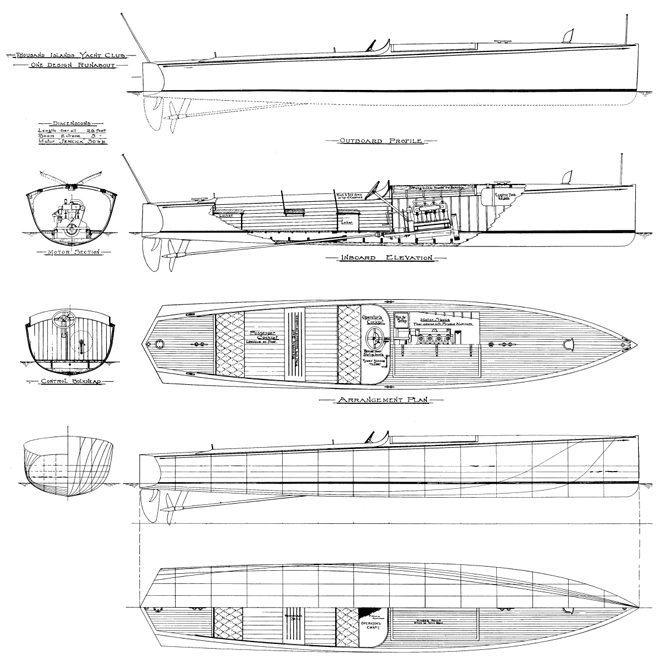 Plans by Charles Mower for the first-ever one-design class of powerboats, circa 1910.

Like Hockberger, I was searching for something else when I happened on an article in a back issue of WoodenBoat magazine (No. 220, May/June 2011) featuring restored original—plus a few fiberglass replica—auto boats in upstate New York. Given drawings that ran in the July 1910 issue of The Rudder magazine, I asked Blount to comment on them. The New York auto boats belong to what is believed to be the first-ever one-design class of powerboats: 28′ x 5′ (8.5m x 1.5m) fast launches that came to be called Number Boats, because each was identified by its fleet number, painted on the bow. Drawn by Charles D. Mower—better known for his sailing yachts—for club racing in the Thousand Islands region of the St. Lawrence River, the 20-boat fleet was produced as a group during the winter of 1909–10. I also asked Blount to look at a torpedo-stern lobsterboat designed and built in 1930 by Will Frost, a native of the Canadian Maritimes who’d moved to the coast of eastern Maine. That 36-footer (11m) was considered a breakthrough workboat by virtue of its speed; Frost optimized its hullform for small, readily available, automotive engines of the day such as Ford’s Model-A four-cylinder. The stern resembles that of Smith’s second illustrated auto boat (again, not shown here). Blount’s comments to me follow:

The Number Boat and the Frost lobsterboat have geometric features essential to going much faster than hull speed even though both hulls do not have hard chines. Their essential features are in the list below, in order of importance.

I believe both of these boat designs were atypical (ahead of their time).

The 1897-vintage 80′ (24.3m) mahogany-and-steel steam launch Ellide at 16.6 knots (top) and 34.8 knots. Note that without straight buttock lines aft or a relatively wide transom there is no opportunity for flow separation, and the hull runs lower in the water as speed increases.

The WoodenBoat article cited above (“Number Boats: Treasures of the Thousand Islands”) was written by Seattle boatwright Emmett Smith (no known relation to James A.); it presents a good account of the actual performance of these auto boats during a two-day summer regatta commemorating their 100th anniversary. The surviving examples have been repowered with modern engines—more horsepower, much lighter—and just as James A. Smith predicted in 1906, those engine changes did not appreciably change the boats’ behavior under way. As for the Frost boat, I described it in a page 3 editorial column (PBB No. 73, October/November 2001) but did not run the drawings seen here. Elsewhere in that issue is a feature article focusing on three representative lobsterboat hullforms, one of which is a later Frost model.

Finally, the great San Francisco earthquake, among the worst natural disasters in American history, occurred in April 1906. An issue of The Automobile that month contained a photo of a couple fleeing the devastation—in their runabout-style motorcar, packed with personal belongings.

Design and Construction of Auto Boats by James A. Smith,
The Automobile Vol. XIV, January 4, 1906.