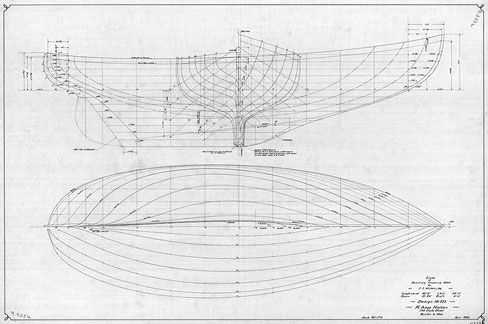 The lines of Holger Danske, Aage Nielsen’s favorite design. A signature Danish double-ender, the 42.5′ (13m) sailing yacht was custom built in Denmark in 1964 by Walsteds Baadevaerft, one of only two yards in the world (the other being Rockport Marine, in Maine) recently authorized to build new boats to Nielsen’s plans. Conceived primarily as a cruiser, Holger Danske was fast enough to win her class in the 1980 edition of the Bermuda Race.

Yacht designer K. Aage Nielsen died 30 years ago this June at age 80. Born and raised in Denmark, and classically trained in that country’s apprenticeship system, Nielsen immigrated to the United States at age 21. Despite having done significant work for two prominent American design firms—the John G. Alden Company and Sparkman & Stephens Inc.—prior to setting up a successful practice of his own, Nielsen never achieved widespread name recognition during his lifetime; even the publishers of a 2006 Nielsen biography-plus-portfolio acknowledge as much. Nielsen did, however, develop a devoted following, mostly in the Northeast and especially among those fortunate enough, whether as first or subsequent owners, to possess a custom sailing yacht—Nielsen’s specialty.

Until this year, that select constituency believed their yachts were, in effect, one of a kind and the last to be had, because Nielsen, according to the biography, stipulated that “no further boats should be built to his designs” after his death.

We’ll discuss those last wishes in a moment. The biography/portfolio project—undertaken by two veteran editors at WoodenBoat magazine, Maynard Bray and Tom Jackson, as a tribute to Nielsen—documents a generous selection of his designs. The project was supported (and co-published) by the Peabody Essex Museum in Salem, Massachusetts, the official repository of Nielsen’s plans and related correspondence. Of interest here is that Bray and Jackson completed their book well before Nielsen’s two daughters, his heirs, decided to revisit their father’s instructions regarding further new-builds to his drawings. Earlier this year the heirs gave exclusive permission to two yards to build new boats to their father’s designs: Rockport Marine, in Maine, a full-service facility that stores (and restores) and maintains the largest group of extant Nielsen yachts; and Walsted Baadevaerft, a Danish yard where many Nielsen designs were expertly built. Accompanying the daughters’ authorization is a key provision: both yards are permitted to upgrade construction, rigging, systems, and interior arrangements “in line with modern practice.” And so Bray and Jackson’s book, conceived to fill what they viewed as a void in the literature of fine boatbuilding and design, now serves as a critical guide to Nielsen yachts, and as a catalog of sorts for potential buyers seeking new construction.

Why did Nielsen deliberately prohibit the posthumous use of his plans for possible construction? Because in his later years, according to Rockport Marine’s website, Nielsen became convinced “that it would no longer be possible to obtain the kind of high-quality, aesthetically pleasing construction that he had carefully specified for his designs during his career.” But we’re skipping several important steps in that career. First, there was his father’s sawmill, which imbued Aage with an intimate understanding of wood. Coupled with a passionate interest in boats, Nielsen brought his knowledge of wood to a traditional Danish apprenticeship in marine construction and design. Boston-based naval architect John Alden immediately recognized Nielsen’s native talent when he applied from afar for a job; in due course so too did Olin Stephens, who made Nielsen the lone designer in a satellite office S&S established in Boston.

Accommodations plans for the Pilot-class sloop, a popular postwar cruising auxiliary produced by multiple builders, chief among them the Hinckley yard in Maine. Nielsen designed the 33-footer (10m) as a freelancer for famed Manhattan firm Sparkman & Stephens Inc. For a number of years prior, he was the sole S&S staffer representing its Boston office.

In their book (bibliographic information appears below), Bray and Jackson present more than a dozen notable Alden and S&S boats designed by Nielsen, among them a large (58′/17.7m) Malabar schooner for Alden and, for S&S, the popular postwar Pilot-class sloop produced by Hinckley. Given some 2,000 designs executed by Sparkman & Stephens staff before his retirement, the fact that Olin included the Pilot drawings in Lines, his landmark retrospective of seminal S&S designs (see the review “Sailboats From the Century Before” in Professional BoatBuilder No. 82) serves as a measure of the regard that Stephens held for Nielsen, who for a time continued as an occasional S&S contractor. 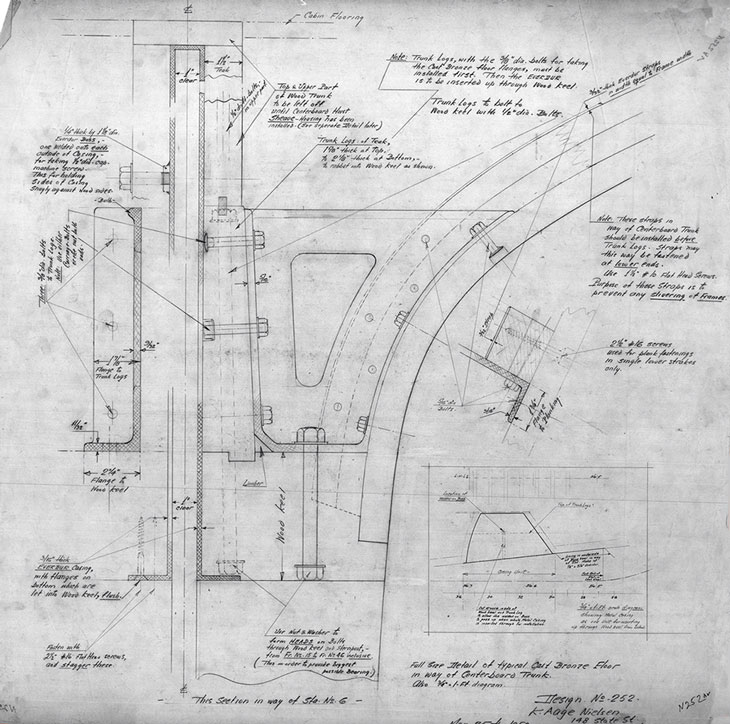 Detail drawing for specially cast bronze floors for the first of four Tiogas, a series of custom, robust keel/centerboarders commissioned by the same owner. Before moving to the States in 1925, Nielsen had a classic boatbuilding-and-design apprenticeship in Denmark; he was fully conversant in both wood and metal construction. Note the quality of his draftsmanship in the examples reproduced here: a set of lines; arrangements for a stock model; a critical construction detail.

Although Rockport Marine was never commissioned to build a Nielsen yacht, numerous Nielsen yachts now call the yard home. Moreover, in recent years the yard has completed an impressive list of historically important yacht restorations—in wood, as well as a series of new-construction cold-molded masterpieces, primarily for sail. Rockport Marine’s distinguished “track record” (in the words of its website) and that of Walsted’s, with which the Nielsen heirs were already familiar, did not escape the daughters’ attention. They ultimately decided that the quality of wooden boatbuilding at these two facilities met their father’s high standards. Thus the Peabody Essex Museum will release a copy of Nielsen plans should one or the other of the yards be contracted to build anew. 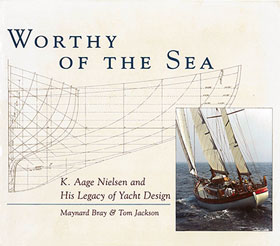 A photo of Holger Danske under sail, along with the yacht’s forebody lines, grace the cover of Worthy of the Sea. Co-written by WoodenBoat magazine editors Maynard Bray and Tom Jackson, their book (Tilbury House, 2006) offers a comprehensive, technically authoritative retrospective of Nielsen’s career. It will now also serve as a guide to his portfolio for potential clients seeking to build a new boat to a Nielsen design.

Design organization in the book divides as follows: double-enders; small boats; stock designs and their descendants; keel-centerboard yawls; racing sloops; large sailing yachts; powerboats (only “a handful”); and designs for Alden and S&S. One chapter is devoted to the multiple Tioga cruiser/racers commissioned by ideal client Brad Noyes; another chapter, as mentioned earlier, focuses on Nielsen’s detail drawings. A final section offers the Nielsen design list. The book closes with a comprehensive index, which takes the total page count to 320. In all, Worthy of the Sea is a handsome hardcover volume that Nielsen himself, ever the perfectionist, would surely appreciate.

For purchasing information go to http://www.tilburyhouse.com/bookstore/worthy-of-sea/ or from The WoodenBoat Store. Meanwhile, Rockport Marine invites “those interested in the Nielsen designs…to see any of the boats that are in the yard.”