In his Design Brief in Professional BoatBuilder No. 152, yacht designer Dudley Dix writes about the Didi 950 (9.5m/31′2″), the plywood raceboat he designed to meet Class 950 rules. It is the latest iteration of radius-chine-plywood racers designed to approximate the shape of a round-bilge fiberglass boat that began with his own Didi 38 (37′9″/11.5m), Black Cat. He writes, “The idea was to help amateur builders build boats that didn’t look amateur-built and so would be more attractive in the resale market.” 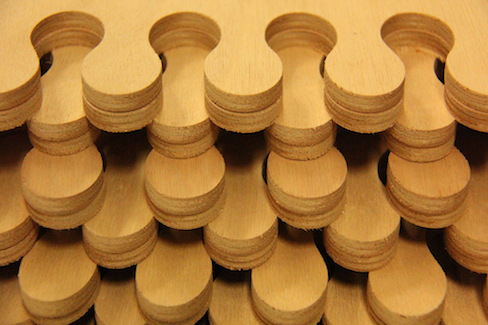 For his Didi 950, yacht designer Dudley Dix switched from scarf to puzzle joints after he began working with kit supplier Chesapeake Light Craft.

Dix was an amateur boatbuilder before beginning his professional yacht design career in 1979. Throughout, he has worked with plywood. His blog with tips for boatbuilders includes an explanation of the types of plywood, methods for joining them, and lessons learned along the way. Before the Didi 950, for example, Dix had been joining panels for kit-boat designs with stepped scarf joints. According to Dix, these joints—the mechanically produced equivalent of hand-planed sloping scarf joints—easily slide, making them tricky to align. In a post about stepped scarf joints, he shares some of the various methods that companies have adopted to overcome this problem.

For the Didi 950, Dix switched to puzzle, or jigsaw, joints in kits supplied by Chesapeake Light Craft in Annapolis, Maryland (also featured in PBB No. 152), which are CNC-cut to lock together like puzzle pieces. Unlike scarf joints, these pieces won’t slide apart. However, panels with tightly fitted jigsaw joints can be assembled only on a large table or floor before being moved upright to the boat. As he explains, that construction method might work for a professional shop with many hands to lift large, pre-built sections, but he was developing a kit that would also be built by amateur—often solo—builders.

“Building with jigsaw joints and gluing the joints in position requires a slightly different approach. It is not practical to hammer a tight joint into place with a rubber mallet. The stringers and other supporting timbers are springy and will bounce away when hit, making it difficult to get the fingers properly flush,” he writes. Another challenge is achieving accurate longitudinal alignment. If the first piece is even slightly out of alignment, the degree of misalignment increases with each additional panel, so that “an error of 1mm (0.04″) on the first of four panels will grow to an error of 4mm (0.15″) by the end of the fourth piece.”

To solve these problems, Dix recommends machining tolerance into the joints. If the jigsaw pieces are a tiny bit slimmer and shorter at the ends, they can be pushed into place without hammering, allowing for upright construction. Tolerance in the joints also provides space to correct minor misalignments. You can find more details about his method of working with jigsaw joints here.