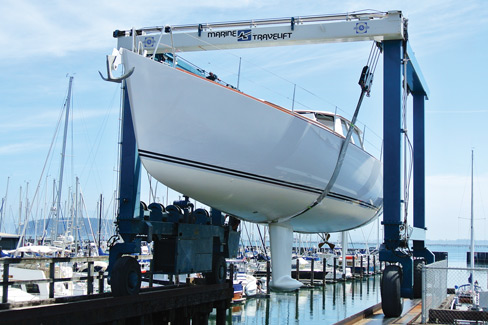 Relaunched in 2014 and renamed Como Nova—Portuguese for “like new”—the Tom Wylie–designed Jade passed its insurance survey and as of this writing was sailing with its new owner.

Few boats are as notorious as Como Nova, formerly Jade, whose ignominious distinction was to nearly bankrupt her builder, Jim Betts. Described in some detail in the magazine pages (see “Survivor II,” Professional BoatBuilder No. 129), here’s the backstory. It’s somewhat complicated, so we’ll begin with an excerpt from that earlier profile of Betts:

“When it was bought in 2007 by mining giant Rio Tinto, Alcan, based in Montreal, Canada, was the third largest producer of aluminum in the world. Today, operating as Rio Tinto Alcan, it’s the largest. When Fortune magazine named it one of ‘America’s Most Admired Companies,’ it hadn’t asked Jim Betts. Or the owners of Kvichak Marine (Seattle, Washington) and Nichols Brothers (Freeland), and others who had built boats with defective alloy made by Alcan. Betts says he is but one of about 50 companies that built hundreds of boats from defective 5083-H321 aluminum plate.

“When Alcoa Inc. merged with Reynolds Metals in 2000, Alcoa absorbed the distribution of Alcan plate. According to the law firm Riddell Williams, representing Alcoa in the subsequent litigation, ‘A division of Reynolds purchased an aluminum alloy from Alcan Inc. and Alcan Aluminum Corporation, and resold it to 54 boat builders in the Pacific Northwest. Alcan’s aluminum later failed in more than 300 vessels. Alcoa settled numerous claims with boat owners and builders, and sued Alcan to recover its losses. Alcoa pursued claims for breach of the implied warranties of merchantability and for particular purpose, and for failure to disclose changes in the manufacturing process and the sensitivity of the product. Litigation extended over two years, with thousands of documents being produced and depositions throughout the United States and Canada. Alcan vigorously defended itself, arguing that it warned of the limitations of its products, that the product met industry specifications, and that the plaintiffs had not properly tested and certified the materials. Trial extended for more than three weeks, and included the presentation of 26 witnesses and 160 exhibits. The jury found for Alcoa, Inc. on all claims presented and awarded all damages requested.’

“Betts’s one build with the material was a beautiful 68′ (21m) cruising sailboat designed by Thomas Wylie (Canyon, California). Launched in 2000, the owner cruised Jade to Alaska and Mexico before learning of the potential disaster beneath him. In brief, he sued, Betts settled (barely managing to avoid bankruptcy), and, once the dust cleared, Betts ended up with the boat that nobody wanted.

“In his new shop in Anacortes [Washington], Betts has spent his spare time—when he’s had any—nibbling the old skin off. That’s done, and now he’s replating the hull. Fortunately, the frames, stringers, and other structural members were all fabricated from 5086, and are in excellent condition.”

Jim Betts’s son Kellen adds more details and brings the story up to the present:

“With Jade, the original owner took a settlement check and walked away. The settlement team had title of the boat. Their stake in it was recovery of all the bad metal. After much negotiation, Jim made an agreement to get title and save Jade from being crushed. The condition was that every ounce of bad metal had to be stripped from the boat and accounted for.

“The hull structure consists of an orthogonal grid of aluminum angle running longitudinally, and aluminum T running transversely. The grid created roughly 24″ x 16″ [610mm x 406mm] rectangular plate-fields. The plate was cut off one plate-field at a time. The process consisted of cutting a hole with a holesaw in the plate, and then cutting from the hole around the rectangular patch with a reciprocating saw. Since the boat had the deck/interior in it, much of this drilling-and-cutting process had to be done by a guy sitting or lying on his back under the boat. Jim’s summary of the process was a ‘three-Sawzall nightmare.’ 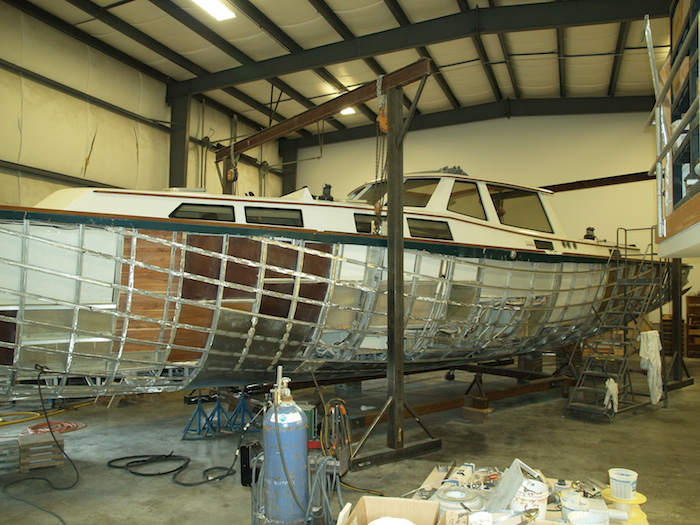 After Jade’s builder, Jim Betts, reacquired the 68′ (21m) aluminum sloop that was the subject of a lawsuit, he began removing the defective 5083-H321 plating during his spare time. 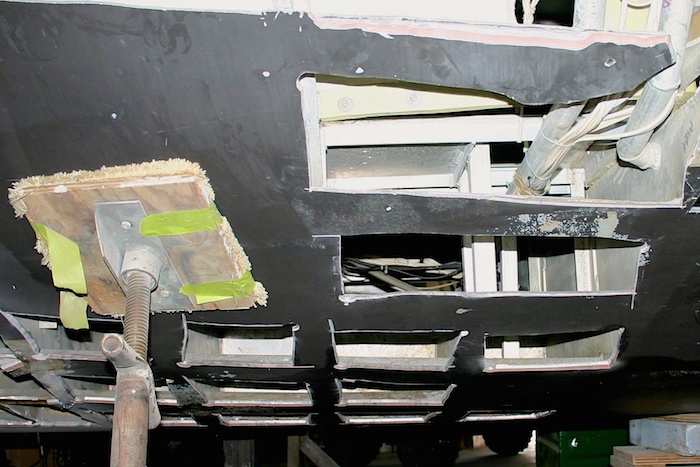 “Early in the project, Jim spent a lot of time thinking about what to do with the boat once he completed the repairs. At one point, a well-known marine environmental organization contacted him about the project and potentially using the boat as a training/ transport vessel for their ship crews.

“Jim also posted a classified ad on Sailing Anarchy. In a rare stroke of luck, Chuck Hosmer, the eventual owner, saw the ad and decided to call. Chuck happened to be sitting in the ferry line on Lopez Island on his way to Anacortes. He said he could be at the shop in about an hour.

“Chuck is a true Northwest fisherman who runs a crabbing fleet in Alaska. He is based out of Seattle and well connected in the marine industry here. His sons run crab boats up in Alaska, and he has many years of experience on many different types of boats. Tom Wylie’s design and the Jade project intrigued him, so he decided to get involved, helping Jim with the repair.

“Chuck always had a soft spot for Jade, and through the repair process decided to acquire the boat. Jade has been a part of his life for seven years now, and Como Nova will be part of the family.

“Once all the old plate was cut off Jade in 2009, the settlement team signed off on the boat, and it was officially cleared from the settlement process. Every ounce of the bad metal was accounted for and taken to the recycling plant.

“Work on Jade was always a side project, and it often ground to a halt when the shop got busy on other projects. During the deconstruction process, Jim built a prototype carbon electric vehicle, a Spirited 380 catamaran, the superstructure and hydrofoil for the Rich Passage I passenger ferry, and various other projects.

“Replating began in 2009, and was slowly completed up through 2012. Starting at center and working outboard and up to the sheer, new plate was welded back on. Unlike the original build, where the hull was upside down and could be worked from the inside, replating had to be done from the outside with the boat right-side up. The new plate is a certified marine-grade 5086 aluminum alloy from a regional supplier.

“In 2013 the hull was faired and the paint process began. The lead man [Javier Ruiz] on our composites, fairing, and paint crew has been with the company for around 15 years. Construction of Jade was one of his first big projects with the company, and he was on the team that built the composite cabin and deck, and faired and painted the first hull. After all these years, he led the team that faired and painted the new hull, so the boat has been quite a significant part of his career as well.

“Since Jim initially took possession of the boat in 2005, the company has moved twice, and Jade came along with it. In the first shop, in Quantum Business Park, Jade took up most of one of the two buildings. In 2012, Jim got involved in the construction of an 87′ [22m] carbon maxi racer/cruiser, so the company moved to a large building closer to town and Jade was shoved over into a corner. In this building, Jim worked on the 87′ and built two high-performance boats designed by Paul Bieker, a Riptide 35 and Riptide 41. After the two Riptides launched and Jim’s work on the 87′ was complete, the company moved again, to a nearby building that was much smaller. Jade was once again the dominant feature of the shop and loomed over the crew…begging to be finished. 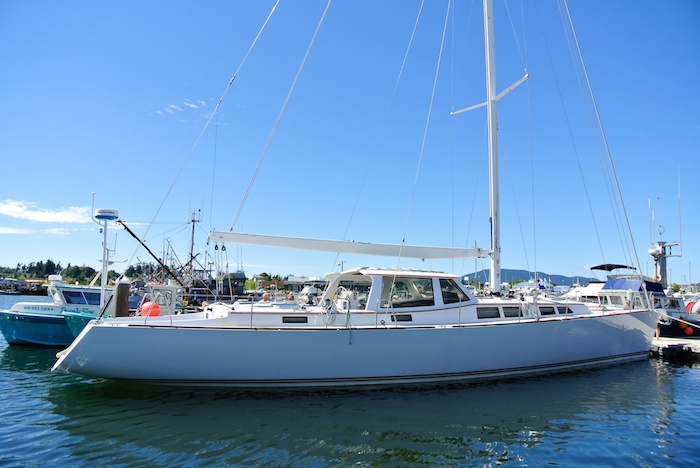 Como Nova is conventionally rigged as a sloop; many of Wylie’s designs have unstayed cat rigs.

“The new paint on Jade was finished in late 2013, and reinstallation of the systems began. Chuck settled on a new name, Como Nova, Portuguese for ‘like new.’ Quite a fitting name for a boat with so much history.

“Most of the original equipment on Jade was in excellent shape. The main engine and generator had very few hours on them and ran well. As with everything on this project, however, reinstallation of all the systems didn’t come without some challenges. Even though the boat was built in 2000, parts and information for many of the components were hard to come by. Some of the systems were upgraded to take advantage of newer technology. Ultimately, perseverance is one of Jim’s defining characteristics, and after seven months Como Nova was ready to launch.”

Como Nova was launched in July 2014 and as of this writing was scheduled for an insurance survey that fall. Looks like this story finally has a happy ending.

from “Rovings,” Professional BoatBuilder No. 152
Compiled by Dan Spurr