Early in my career I worked for a dealership that sold production boats, every one of which was equipped with painted aluminum arches. Invariably, the paint would blister, in some cases before the vessels were offloaded from delivery trailers, and warranty claims were dutifully submitted, which the builder, to its credit, promptly paid. In an effort to stem the cash flow, the company earnestly focused on improving the preparation and paint application processes. Yet the problem persisted.

A few years later, I was managing a boatyard where painting aluminum spars was common. Leery of experiencing the same sort of failure, I began reviewing old spars and other painted aluminum hardware. I noticed that nearly all the failures occurred adjacent to a hardware installation, a fastener, a spreader, a step, or some other fitting—an area where the paint coating had necessarily been upset or breached. I believed I was onto something. 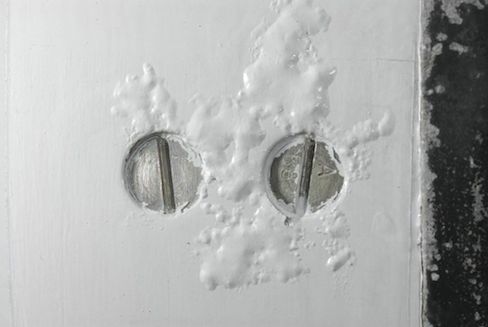 It’s the rare marine industry professional who hasn’t come across unsightly blistered paint on aluminum surfaces. Here, the screws damaged the paint when they were installed, allowing water to migrate under the coating.

Among other attributes, marine-grade aluminum alloys, those in the 5000 and 6000 series, are naturally corrosion resistant. When exposed to air, oxygenated seawater, or fresh water, aluminum quickly develops a tough, transparent oxide film that is resistant to corrosion. There is, however, an aesthetic price for this durability. Left to the elements, aluminum develops a dull gray—and eventually dusty, gritty—finish; for military, pilot, fishing, and utilitarian applications, that finish can be a thing of beauty, as it lowers building and maintenance costs. Few recreational users have, however, learned to look beyond aluminum’s blemished surface. 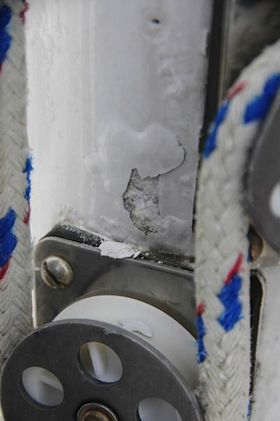 The white powdery material, aluminum oxide, forms when aluminum is robbed of oxygen in a wet environment.

Enter two-part paints. These high-performance paints enable boatbuilders and component manufacturers to continue to reap aluminum’s rewards, including strength, ease of fabrication, and weight savings, as well as a resistance to corrosion for interior and engineering spaces, while enhancing the alloy’s visual appeal. However, once painted, aluminum can no longer develop its tough, clear, corrosion-resistant oxide coating. It doesn’t matter, because when aluminum is not exposed to moisture, its corrosion clock stops, or at least slows down substantially.

The paint works well until it is breached, and water enters the rift. This breach could be caused by a fastener, an antenna base, a navigation light, a hinge, a lockset, a nick, or a scratch—and it could be microscopic. Initially the wound is self-healing: The oxide coating forms, but instead of protecting the aluminum, it lifts the edge of the paint and allows water to migrate farther under the coating. At that point, the chemical equation changes, as moisture and aluminum, in the absence of air, are the ideal incubators for a phenomenon known as poultice corrosion. When this happens, the aluminum pits and produces copious amounts of aluminum oxide powder or, when wet, aluminum hydroxide, which looks a bit like freezer-burned vanilla ice cream. The formation of the oxide or hydroxide lifts the paint, causing the familiar and unsightly blister, which eventually falls off, exposing raw, pitted aluminum. The process doesn’t stop there, as it begins anew at the interface between the paint and exposed aluminum. While it progresses slowly, once it begins it’s difficult if not impossible to arrest without removing the blistered paint, cleaning, priming, and repainting the surface. 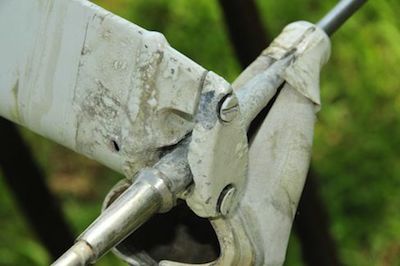 It’s a double whammy for corrosion: The elk hide spreader boot is a hygroscopic material, attracting moisture and keeping the painted aluminum surface underneath wet and oxygen depleted.

Corrosion is also a problem on sharp, or unradiused, edges. In these areas, paint applied to the sharp edge tends to run off, making it too thin to be protective. Those areas also tend to suffer from abrasion abuse.

As a result of my observations, both at the production boat dealership and in the boat yard, I concluded that the corrosion was the indirect result of breaches in the paint’s otherwise contiguous coating, caused, in the vast majority of cases, by hardware installations.

Others who have come to similar conclusions have tried to prevent corrosion by inserting plastic or another nonmetallic bushing or insulator between the hardware and the painted aluminum structure. While this can be helpful, it’s far from ideal: On heavily loaded structures such as cleats and winches, it’s often impractical to install these insulators; the loading will often cause them to split or crush. And, when water makes its way between the insulator and the painted surface, as it always does, poultice corrosion will begin. 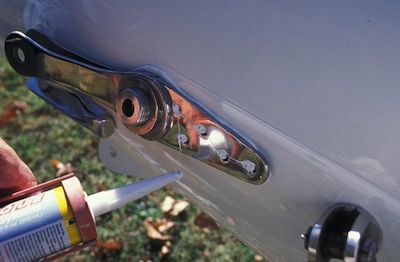 The best solution is prevention; when installing hardware on painted aluminum surfaces, liberally bed with polyurethane or polysulfide sealant.

It’s virtually impossible to prevent paint from being damaged or breached at hardware installations, often even with the addition of insulators. Therefore, instead of attempting to prevent the damage, an effort I believe is futile, assume it will occur and mitigate its effects. The solution is straightforward enough: protect the paint “wound” with a resilient, pliable sealant to prevent water from entering. Begin by dewaxing/degreasing both surfaces with a solvent such as mineral spirits or 3M General Purpose Adhesive Remover, then liberally bed the hardware with a low-adhesion polyurethane or polysulfide sealant. “Liberally” means the sealant should ooze out around the entire perimeter of the hardware base, as damage to the painted surface will occur wherever hardware makes contact. The sealant prevents water intrusion, rendering the paint wound inert. Fastener threads should be similarly treated. If insulators are used, the surface between the insulator and the paint should be bedded.

Sharp edges should be gently rounded before being painted. That alone will prevent the thin-paint phenomenon, coating failure, and subsequent corrosion.

All paint applications benefit from proper surface preparation, priming, and best industry paint application practices, and aluminum is no exception. Using these, as well as the liberal hardware bedding technique and quickly repairing damage, paint applied over aluminum can last for a decade or more.