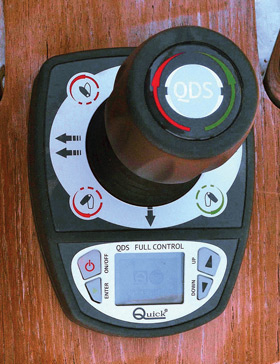 The Quick Docking System (QDS) works on bow and stern thrusters instead of pod-type propulsors.

The Quick Docking System (QDS), developed by the marine equipment manufacturer Quick S.p.A., is a unique integrated maneuvering system for precisely docking sailing yachts. While most joystick controls are tailored to pod-type-propulsion mechanisms, the QDS is similar to ZF Marine’s JMS (Joystick Maneuvering System), which provides control of multiple thrusters and transmission shifting aboard yachts. Whereas the JMS is designed for the powerboat market, Quick’s QDS is aimed squarely at sailing yachts.

QDS employs a bow and stern thruster connected via a controller area network (CAN) bus to a joystick. Essential to the system is the integration of mechanical or electronic engine-shift controls for taking command of forward and reverse gears that, in concert with the two thrusters, makes for simplified docking and low-speed maneuvering.

On my recent visit to the headquarters of Quick, in Ravenna, Italy, I saw the in-house engineering and manufacturing of its new control system and components, as well as its established line of thrusters that complete the QDS platform. 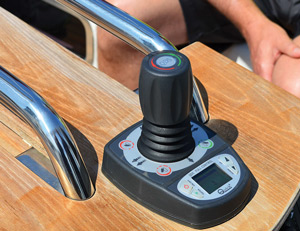 With little or no way on and the rudder admidships, the QDS is activated to deploy the thrusters, which are controlled by the joystick.

Sailing yachts with deep draft, high freeboard, wide beam, and modest horsepower can make maneuvering an adventure even on a good day, so it was fortunate that the demonstration of the QDS, courtesy of Quick USA’s Bryan Billic, was aboard the company’s test platform, a Hanse 495, at the end of my factory visit.

Operation begins with the rudder at amidships with little to no way on the vessel with the engine started and its transmission in neutral. Next, press a control-transfer button on a small console near the stock engine throttle-shift control. This deploys both thrusters, fore and aft, into the water with a resulting “system ready” prompt displayed on the joystick’s LCD screen—a process that takes about 30 seconds. From this point on, QDS is the primary control.

Moving the stick straight forward (+x-axis) shifts the transmission into forward gear so the boat moves forward. Moving the stick directly aft shifts the transmission into reverse (–x-axis). Releasing the stick at any time returns the joystick to a neutral state, shifting the gear to neutral. With the stick at its neutral position, engagement left on the y-axis activates both thrusters for lateral boat movement to port; engagement right moves the boat to starboard. Twisting the joystick clockwise (CW) engages the bow thruster for starboard movement and the stern thruster for port movement with the vessel pivoting CW on its central axis. Conversely, joystick rotation counterclockwise (CCW) engages the bow thruster to port and the stern to starboard with the vessel pivoting on its axis CCW.

Combining movements of the joystick, pushing the stick forward and twisting it CW shifts the transmission into forward gear and engages the thruster to starboard with the stern thruster remaining idle. Pulling the stick aft and twisting CCW shifts the transmission into reverse and engages the stern thruster to starboard with the bow thruster remaining idle.

Clearly, these maneuvers are better shown by a graphic representation. Along with system command status, troubleshooting, and calibration cues, the LCD screen displays the vessel in plan view with arrows and a handful of other symbols to best indicate what exactly the vessel is doing in real time.

Restoring command to the engine controls requires bringing the vessel to a slow- or no-speed condition and transferring control back by touching the control-transfer button again. Control transfer and thruster retraction takes 30 seconds.

The installation of QDS is typical of most CAN networks, meaning NMEA-2000-type tees, plugs, cords, terminating resistors (two), and a teed-in 12VDC power supply. At present, QDS is intended to integrate with Quick-brand thrusters only, through a dedicated QDS CAN drive, one per thruster. It should be noted that the stern thruster aboard the subject test platform demanded off-centerline installation to avoid interference with the sail drive; that’s something a builder should factor in if considering QDS.