In the 1960s and ’70s, when boatbuilders scrambled to satiate a burgeoning demand for new models, a production run of 500 units wasn’t unusual. Among builders of keel sailboats, Pearson, Cal, Columbia, and other leaders each had models that exceeded that number. But that was a long time ago in boatbuilding years. Throw in a couple of recessions and you’d be hard pressed to name the last keelboat that sold anywhere near 500. 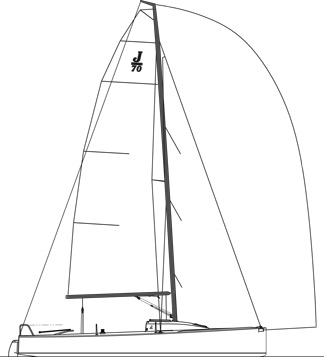 Well, the J/70 (22.75′/6.9m) from Rhode Island–based J Boats ran over that signpost in just over two years and is still racing. And races are the reason why. As explained in “J Is for Johnstone” in PBB No. 98, the family of Bob, Rod, Jeff, and Alan, plus Stu, Drake, Phil, and Peter have been masterful marketers, ingeniously creating one-design fleets whose members collectively buy boats so they can race against each other—go fast and have fun. The J/24 (7.3m), introduced in 1975 and now numbering around 5,500, launched the company and provided the blueprint for developing and selling future models. Already there are J/70 fleets throughout the U.S., Canada, Europe, Mexico, Australia, and South America. It’s the fourth most popular model after the J/24, J/22 (6.9m with around 1,650 units), and the 26′ (8m) J/80 (around 1,600 units), but the latter over a much longer period of time; the J/80 was introduced 20 years ago.

The J/70, introduced in March 2010, is billed as “ramp launchable” with a lifting bulb keel, removable rudder, and lightweight carbon rig, all of which can be moved from trailer to sailaway in about 30 minutes or less. Class rules allow a 2.5-hp (1.9-kW) outboard, so one doesn’t have to paddle home when the wind fails.

In the U.S. and around the world, one-design fleet racing in fast, easily handled sloops has made the J/70, shown here, and other models extremely popular.

The tooling was made in China, where the plan was to initiate production for the Asian market. But when they perceived greater stateside demand after conversations at the U.S. Sailboat Show in Annapolis, Maryland, the Johnstones shipped the tooling to Bristol, Rhode Island, to commence construction at CF Composites. French builder of J Boats, J Composites (Les Sables d’Olonne), then began production of the J/70 for the European market, in addition to the J/80, J/111 (36.5′/11.1m), and J/122 (40′/12.2m) models it’s also licensed to build. Australian builder McConaghy Boats recently began building the J/70 at its China facility near Hong Kong. J Boats have also been built in Argentina, but because two boats can be shipped in a 40′ (12.2m) container, for now sending tooling to South America isn’t deemed cost effective. Construction is balsa-cored E-glass skins with Corecell foam in the deck employing the SCRIMP close-mold process. 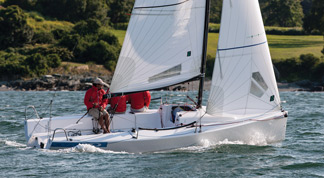 President Jeff Johnstone says the team had been looking at developing a smaller sprit boat for some years. While three of the small Js are billed as trailerable, they require a hoist or lift for launching and retrieving, due to their fixed keels. “Three years ago we got serious,” Johnstone says. “We looked at the market and saw a demand for a boat that could be ramp launchable, independent of marina facilities. We’d never done a lift keel before. Initially we had two designs, one for a 20-footer (6m) and one for 22.5′ (6.9m), both designed by Alan [Johnstone, the company’s chief-designer]. We went for the longer one because we needed the length for stability, and we needed the stability for it to be a keelboat and not a big dinghy.” 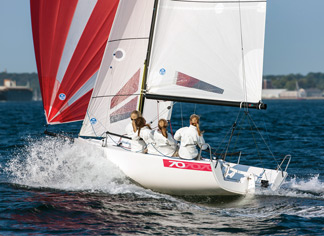 Part of the J/70’s mass appeal is a reputation for being family friendly. In the J/70 Worlds, held in September, the youngest competitor was 13; the oldest, 78.

New-product development, he adds, always starts with demand. Then in the case of the J/70, portability and multi-generation appeal followed. “We wanted a sport boat that would excite junior sailors on a platform that older people could also handle without being too athletic. We originally intended a race crew of three, but most are crewed by four—two couples, and often parent/child combinations. And because of past complaints about crew weight limits, we decided on setting up the class not to set a weight limit. Though when you get over around 700 lbs (317 kg) you start dragging downwind.” To mitigate the performance penalty for heavier crews, races are sailed with the same number of upwind legs as downwind, which is another example of how J Boats fine-tunes its boats and race management to the particular interests and concerns of its customers.

The first J/70 Worlds, sailed off Newport, Rhode Island, saw 86 boats compete from 13 countries. Twenty-two of those, says Johnstone, had two or more family members crewing, showing the family appeal of the design. And not only that, but age appeal as well: skippers’ ages ranged from 13 to 78.

from “Rovings,” Professional BoatBuilder No. 152
Compiled by Dan Spurr