Watch video of the 44-FCI on the water in Tampa.

The tourist-friendly Tampa, Florida, waterfront isn’t a place you expect to see machine guns. But they were there, mounted on each side of the 44-FCI (Fast Coastal Interceptor) docked in front of the Tampa Convention Center during the 2014 edition of IBEX, held September 30–October 2.

Or so it appeared. The machine guns were fakes. The real guns were the engines. The guys from Tampa Yacht Manufacturing had motored the interceptor across Tampa Bay from St. Petersburg, Florida, happy to give demonstrations of its power. On a ride out to the bay, we shot up to around 55 knots, taking one turn at about 35 knots. We could outrun the law if we wanted to. On the show’s last day, the combined 1,600 hp (1,200 kW) of the interceptor’s twin MAN R6-800s easily beat the local Hillsborough County sheriff’s 1,150-hp (862-kW) patrol boat in a good-natured contest. 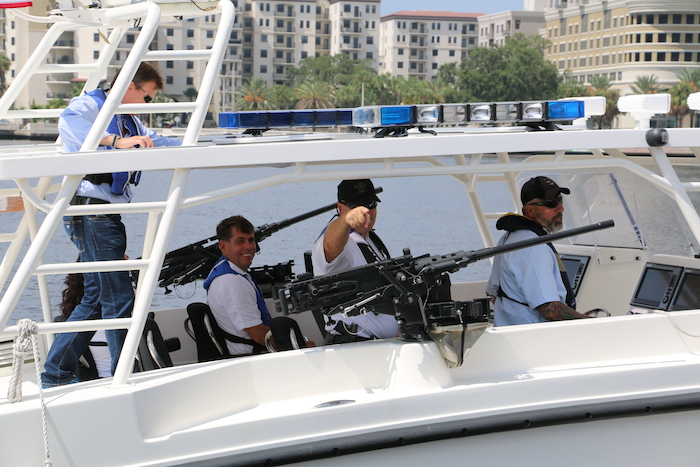 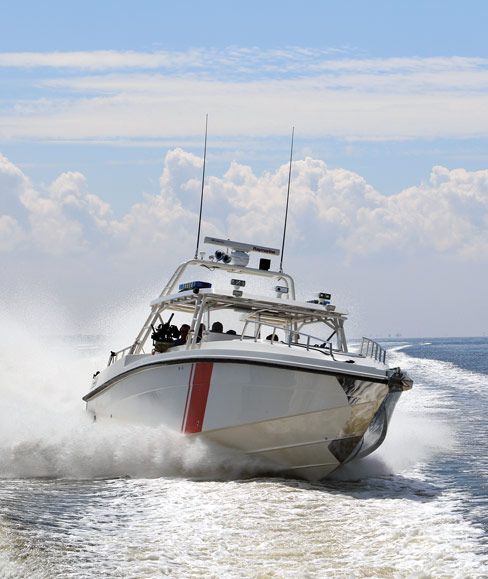 After Tampa Yacht Manufacturing bought the Tempest line, it updated the hulls to handle more horsepower and speeds close to 60 knots.

In most cases, the 44-FCI’s machine guns would be real, and it would be the law. Part of the Tempest line of high-speed patrol vessels, the “44-FCI is a 44′ (13.2m) interceptor-class vessel with a proven design heritage that has seen historic action with U.S. Customs and the U.S. Coast Guard for more than two decades,” according to literature from Tampa Yachts.

He explained: “Tempest was a big-name company that was started in the ’70s by a man named Dick Simon, and he borrowed from Italian design and developed yacht molds. The 44 was his first boat, and he ended up selling that as a 43-footer [13.1m] to the U.S. Coast Guard in the mid ’80s for customs and border protection.”

Between five and 10 were developed for high-speed enforcement. The boats were “very aggressive, narrow, high-seas, rough-water boats that were easily driven and with shallow surface drives,” said Chalfant.

After buying the Tempest line in 2006, Tampa Yachts updated that design. “When they first bought the molds,” Chalfant said, “they modified the hull molds and gave it a little more beam and a bigger cockpit and wider chines to handle more horsepower and to go even faster, to get it from 40 knots to 50 knots and close to 60 knots.”

Six main sizes—27′, 35′, 39′, 44′, 50′, and 60′ (8.2m, 10.7m, 12m, 13.2m, 15.2m, and 18.3m)—serve as springboards for more than 20 designs in carbon-fiber-reinforced all-composite construction. “Traditionally, for a small number of boats, building a fiberglass boat and the molds to make the fiberglass is cost-prohibitive. You need an order of six boats in order to justify the tooling across the number of units,” said Chalfant. “We already have the molds. We can expand the molds and shrink the molds and make a variety of configurations, within reason, that use our inventory of molds to their advantage and build a variety of boats that are customized or semi-customized in a more efficient fashion.” 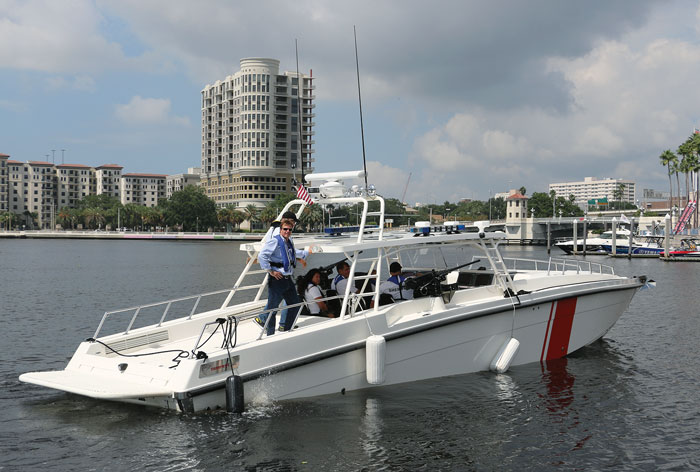 With a lineage tracing back to Thunderboat Row, Tampa Yacht Manufacturing’s 44-FCI (13.4m) Fast Coastal Interceptor was on display, and available for rides, at the 2014 International BoatBuilders’ Exhibition & Conference (IBEX) in Tampa, Florida, last September.

A list of features for the 44-FCI is a reminder that these boats are workplaces, and often dangerous. Shock-mitigating seating helps protect crew from long days and nights in rough seas. Fifty-caliber machine gun mounts and armored high-density polyethylene (HDPE) panels offering NIJ Level III protection (a high-level National Institute of Justice standard for protective armor) are the crew’s defenses against more sinister threats on the water.

Chalfant was discreet when talking about who’s buying the boats. For the 44: “We have half a dozen boats in the Far East operating as search and rescue (SAR), and we’re about to build a couple dozen boats for the Middle East for coastal patrol and interdiction, security. And we’re offering them in South America for military and government security.” Tampa Yacht Manufacturing is also presenting a version of the 44 to U.S. customs and border control as replacement craft.

Most of us, hopefully, will encounter a Tempest only at a future IBEX.