Throughout the United States, resource managers are fighting invasive species: They’ve put up electronic barriers to prevent Asian carp from entering the Great Lakes; they’ve promoted lionfish as a new cuisine along the Gulf of Mexico to encourage commercial fishing; and they’ve injected waterways in Virginia, Texas, and Minnesota with potassium chlorine, also called liquid potash, which kills motor-clogging zebra mussels by cutting off their oxygen while leaving fish intact. 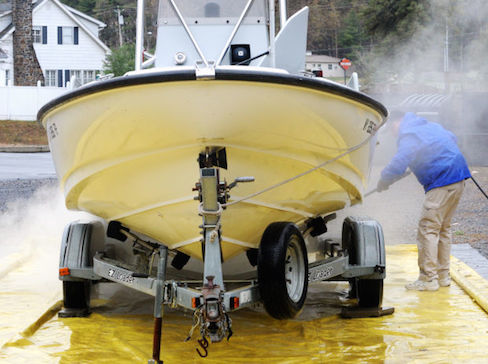 More states are requiring boats with standing water be decontaminated to prevent the spread of invasive species. But those high-temperature washdowns could be harmful to engines and other systems.

Now resource managers are looking to the boat industry to join their fight. For the first time, the American Boat & Yacht Council will be hosting an Aquatic Invasive Species Summit on January 27–28 at the South Point Hotel in Las Vegas. The event will focus on what the recreational boating industry can do to address this growing problem.

Zebra mussels, for instance, are native to freshwater lakes in Western Russia and Eastern Europe. In 1988 it was discovered that they were brought to the Great Lakes in the ballast water of freighters and quickly spread. Within one year, clusters had attached themselves to every solid object in Lake Erie. Their destructive qualities include crowding out native species—almost all native Great Lakes bivalves are gone—clogging public water systems, and jamming boat motors, cooling systems, and steering equipment. 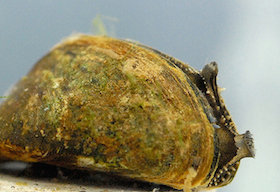 Invasive zebra mussels jump from one lake to another by attaching to boats and trailers. They were first detected in the Great Lakes in 1988. Within a year, they covered all solid surfaces in Lake Erie.

They continue to infest additional bodies of water, jumping from lake to lake and state to state by attaching themselves to boat hulls and trailers. That has led to new laws and access problems for boaters. Last year, for example, Texas began requiring that all boaters drain their boats before launching them into and after hauling them from a lake, and the city of Baltimore shut down all boating in its reservoirs.

A problem for boat owners is a problem for the industry. “The first reason a boatbuilder should care about this is because it’s a growing issue that’s affecting more and more of their consumers,” said ABYC technical director Brian Goodwin. “It creates access issues. It creates delays in terms of getting their boats on the water. It’s a bigger issue for towboats, but the reality is all of these inconveniences add up, and the boater might say, ‘I don’t want to use my boat. I want to play golf.’”

One of the goals of the summit, said Goodwin, is exploring whether the problem can be addressed in boat design. “Can the boats drain better? With towboats and wakeboard boats, you can’t even access the ballast tanks; they’re sealed. Automatically those boats are going into the decontamination process.” 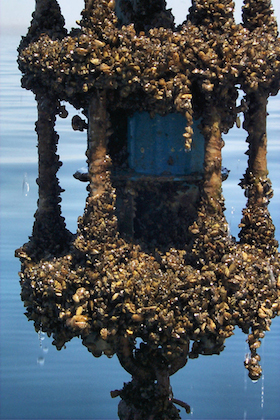 A channel meter in Lake Michigan disappears under thousands of zebra mussels.

And that high-temperature washdown could also harm the boats, he explained: “If they have standing water, they have to be decontaminated. You’re taking an engine that’s used to getting at most 90°F (32°C) water from cooling, and it’s suddenly getting 140°F (60°C) water. You take a nice, new outboard and you could destroy it. That’s a big issue.”

ABYC is encouraging boat designers and builders, systems designers and installers to attend the summit. The two-day event will combine small working groups with expanded group sessions, hopefully to come up with plans to move forward. The four small groups will focus on boat and personal-watercraft design and construction, engine and propulsion systems, trailer design and construction, and component/systems design and installation.

Goodwin said the collaboration will help bring the issue of invasive species, usually fought on a state level, to a national scale. It may also lead ABYC to produce technical reports for consumers and industry professionals. “There’ll be some things we won’t be able to solve,” said Goodwin, “but there will probably be some low-hanging fruit we’ll be able to capture.”

To find out more about the Aquatic Invasive Species Summit, contact Brian Goodwin at bgoodwin@nullabycinc.org. Contact the American Boat & Yacht Council at 410–990–4460, or visit www.abycinc.org.