The 100′ (30.5m) Comanche was designed to be the fastest monohull in the world—and her build was speedy too. For the past year, Hodgdon Yachts in East Boothbay, Maine, raced to launch the all-carbon super-maxi sloop in time for the Sydney–Hobart race (it began Dec. 26, and Comanche placed second on the line). Her build was not just a yearlong sprint; it was also the (nearly) 200-year-old shop’s first attempt at cored carbon prepreg construction.

How did they do it? In the new issue of Professional BoatBuilder, senior editor Paul Lazarus describes how Hodgdon Yachts reconfigured its shop, trained its team in complex prepreg composite construction, and welcomed an international team of skilled composite raceboat specialists to manage and supervise Comanche’s build. To find out more, read Paul’s story, “0 to 60,” beginning on page 20 of PBB No. 153.

To document such an incomparable project, we were fortunate that noted photographer Onne van der Wal was also on board. Not only do his striking photographs appear in the story, but he also shot several videos of Comanche. In one released shortly before the big race, her skipper, Ken Read, describes his reaction when he first saw her: “The first time I saw Comanche’s hull I remember peering over the apron down into this shed. I remember looking down and just going, Oh my god. What have we done? It’s massive. This is part aircraft carrier.”

The short video shows some great shots of her build, beginning with the first layer of carbon placed in the hull. Watch it above. 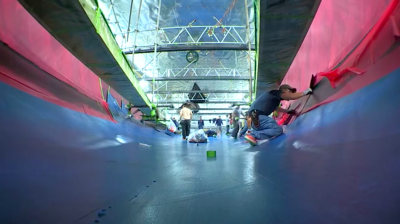 HanseYachts AG, one of the world’s big manufacturers of recreational craft, located in Greifswald, Germany, with additional factories in Poland and France, and its Polish subsidiary, Technologie Tworzyw Sztucznych… Read more »