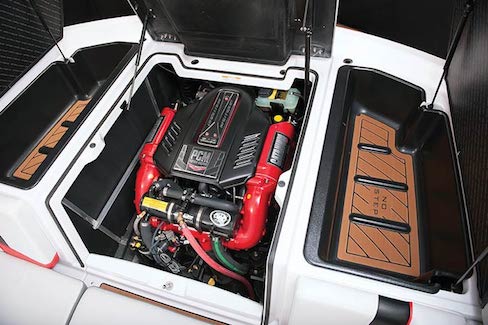 When you talk to boatbuilders about their relationships with vendors, and the importance of maintaining inventory  levels and supply schedules, engines are high on the priority list. They are often the single most-expensive component, and much other work revolves around them. So if you owned the engine company, wouldn’t that solve a lot of issues?

Last October, Correct Craft, which owns Nautique, a builder of ski and wakeboard boats ranging from 20′ to 25′ (6.1m to 7.6m), announced it had acquired PCM Marine Engines and Crusader Engines, its suppliers of gasoline inboard engines. The two engine companies were operating jointly under the name Pleasurecraft Engine Group, based in Little Mountain, South Carolina. Correct Craft also owns Aktion Parks in Orlando and Miami, Florida, where one can participate in the aforementioned watersports.

Nautique traces its history to one W.C. Meloon, who in 1924 moved his family from New Hampshire to Florida, and the following year founded the Florida Variety Boat Co. in Pine Castle. The company website lists several innovations attributable to the young company: first to deliver boats cross-country by towing on trailers rather than the then-conventional means of railroad transport (1926); and first to add swim platforms to the sterns of its boats (1952). During World War II, the renamed Correct Craft was asked to build 400 boats in 15 days. After the war it built a line of runabouts and cabin cruisers up to 50‘ (15.2m). In 1961 a man named Leo Bentz sold the molds and brand name of his Ski Nautique design to Correct Craft, which the company began producing, redirecting its marketing to this growing niche. And it has done very well aligning its brand with water ski and wakeboard events and promotions.