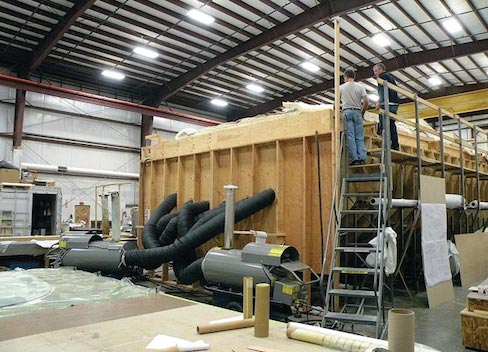 Joe Kitchell was called into an Anacortes, Wash­ington, shop to build an 88′ (26.8m) carbon prepreg hull after the original attempt failed. Consulting with the on-site designer, Jim Donovan, and Ted Brown from Al Fresco Composites (Portsmouth, Rhode Island), it was decided to turn the mold into an oven. “We were able to meet the ramp rate specified as well as hold an even cook temperature throughout the mold in the test run. We then loaded the mold with the outer skin and had a successful cook. The core was laid, and inner skin cooked as well, all a success.” The mold is shown from the stern with heater hoses going in.

The practice is probably as old as the goatskin currach, but assembling a portable boatbuilding crew that travels to a temporary construction site still seems novel. Oracle’s America’s Cup winner was built in a rented shed in Anacortes, Washington, by a crew whose leaders were from New Zealand. In similar fashion, American Joe Kitchell has made a career of gathering a talented group of boatwrights and mobilizing them in various destinations around the world.

Kitchell first contacted us late last spring, with this news: “We’ve recently built a 72‘ [22m] passenger ferry in Port Angeles, Washington, that the industry may be interested in. This is a Corecell and carbon/E-glass, epoxy-infused catamaran built to U.S. Coast Guard passenger vessel standards for 92 passengers. It has two (continuous duty) 500-hp [375-kW] Iveco engines with jet drives that power it at 30 knots unloaded. We don’t expect more than a 2–3-knot drop in speed with passengers, as these are displacement hulls with a 16.5-to-1 length-to-beam ratio. We’ve just launched and still haven’t figured out the exact fuel burn, as the engine manufacturer claims 24.3 gph [92 lph] @ 500hp (x 2) and the computer says we are burning 28 gph [106 lph] per side. Regardless, these are very good numbers for moving 92 people at 28 knots with jet drives.” 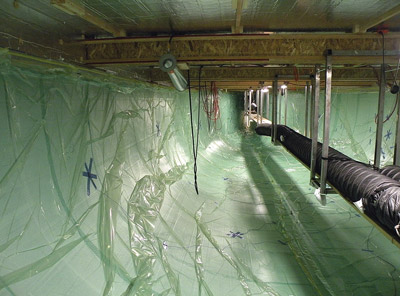 A look inside the mold with the heater hoses hanging. Adjustable fans and vents moved and evenly distributed the heat, with thermocouples to track various points.

Construction, as Kitchell said, was to USCG standards, but not certified in the U.S. “Panama has similar rules,” he writes, “and following U.S. standards is an easy enough way to comply.” The hulls, as noted, are infused E-glass and Corecell foam with infused carbon and foam main decks. “All other panels and pieces, except the carbon underwing beams,” he writes on his website, “are made with wet-layup E-glass and foam.”

The upside-down male plug was made up of plywood frames, planked and coated with putty for fairing. The glass was then laid on, bagged, and infused with epoxy resin. Legs were glued on to flip the hulls, which were then aligned and connected with the athwartship beams. Machinery was installed before the decks went on. Lastly, the cabin and pilothouse were constructed. 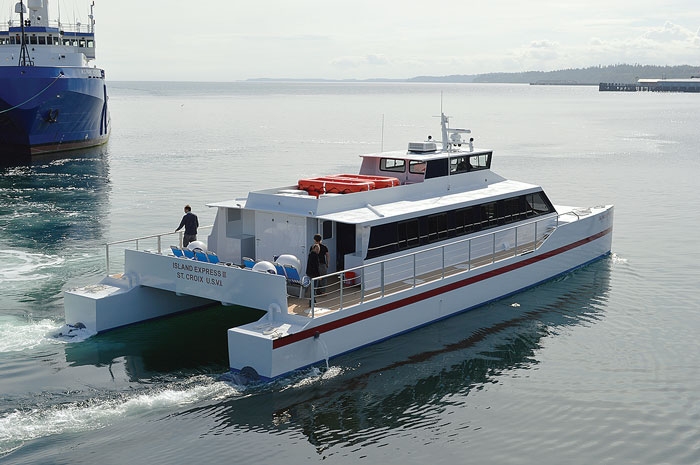 The 72′ (22m) Island Express III just launched in Port Angeles, Washington, and soon to depart for Panama on her own bottom. Kitchell was pleased at the 25.5 gph (96.5 lph) fuel consumption per engine, with the boat weighted for 92 passengers.

As luck would have it, the ferry was launched a few days after I’d left Port Angeles to visit Armstrong Marine (see “The Strong Stuff,” Professional BoatBuilder No. 152). But we caught up later, when he told me he’d been a traveling boatbuilder “who in the past has signed on either with yards for a particular project or directly building for an owner.” Now married with children, he’s hoping to settle down, and with that goal in mind he formed Left Coast Composites in Port Angeles, Washington. But wait, it’s not quite that settled: “I also have a shop in Costa Rica with my brother,” he writes, “that will be used for smaller boats that do not need to be U.S. passenger vessels. We start at least one 52‘ [15.8m] cat there in a couple months which will operate out of Herradura; and, when finished, I hope to have another larger build lined up back up here. Not exactly ‘settling down,’ but two locations are far better than never having a home.” 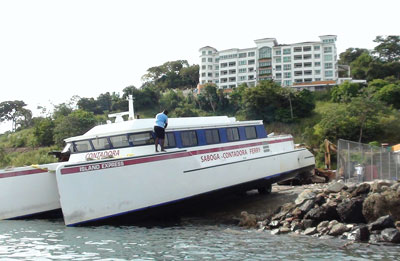 A 65′ (19.8m) ferry is hauled out in Panama. “It had seen a couple years of hard use and was in need of some cosmetics, so the owner asked me to come down. Bulldozer and tractor trailer on the nastiest boat ramp you can imagine—fun stuff,” said Kitchell.

The owner of the 52‘ ferry, Kitchell writes, “is heavily involved in the design process with the goal of having the highest fuel efficiency possible. This is the first jet-drive boat he has drawn, but we’ve found that at higher speeds, much of what we’ve learned from the other boats is applicable. His current passenger ferry company in Panama is called Sea Las Perlas.”

Our correspondence was interrupted when Kitchell had to deliver the ferry from Port Angeles to Panama, which no doubt didn’t fit well with his desire to settle down, but it did give him the opportunity to check fuel burn, “which is probably the most significant thing about this project. To move 92 people at these speeds, with this level of comfort, burning so little fuel is what can really make this boat stand out.” 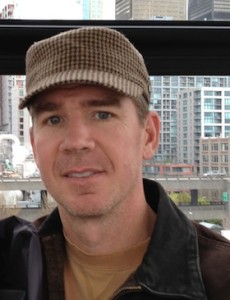 Joe Kitchell’s expertise in boatbuilding is not just in advanced composites; he has also worked as a delivery skipper, engineer, and systems specialist on traditionally rigged sailing vessels such as America and Providence. Glance, his personal boat, a Reuel Parker design after the late 1800s Swansea pilot schooners, was featured for July in the 2007 WoodenBoat calendar.

A month later, with the boat in Panama and carrying passengers, Kitchell wrote: “Back from Panama after a safe delivery…over a 4,000-mile sea trial. Not the smartest thing I’ve ever done, but it worked out alright. The only thing that failed was the electronic helm, and it didn’t completely fail. After many fill-ups, we’ve figured out the boat burns 25.5 gallons [96.5 l] a side loaded with the weight of 92 passengers moving at 28 knots. Those are pretty impressive numbers. At lower speeds the fuel burn isn’t nearly as good as the canoe-sterns we’ve built, but that was expected.”

Plans change. Working with his brother, Kitchell is presently in Costa Rica building two 54‘ (16.5m) ferry/excursion power catamarans. “One is for an operator in Panama, and the other is for us. We will be chartering our boat in Costa Rica. It is an opportunity we have been working on for 12 years. We finally had all the pieces fall into place.”

Mindful of his growing family, Kitchell says he intends to again open a more permanent shop in the Pacific North-west…all in good time.

Contact Joe Kitchell by phone in Costa Rica at 011–506–842–0509, by e-mail at jakitchell@nullhotmail.com, or on his website www.joekitchell.com.