Pedal-powered boats have been around for years. The small boats at resorts and amusement parks are lucky to achieve even the speed of a duck. 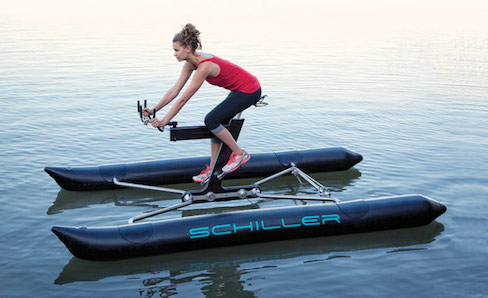 Judah Schiller’s marine-grade pedal-powered watercraft, the Schiller X1, proves that while there may be nothing new under the sun, there’s always room for improvement.

In the 1980s, sailor/inventor Garry Hoyt, who developed the Freedom line of unstayed sloops and cat-ketches, teamed with Harken Yacht Equipment (Peewaukee, Wisconsin) to develop the teardrop-shaped Waterbug. A geared drive mechanism and slippery hullform improved on the efficiency of the aforementioned craft.

Now, an Italian has developed the Shuttle Bike Kit. A conventional mountain bicycle is mounted on a set of inflatable pontoons and hooked up to a simple drive system with a propeller. It claims a speed range of 3.5–5.5 knots. All parts fit in a standard backpack. The Shuttle Bike Kit works with any bike, so one can ride to the beach, inflate and assemble the pontoons and parts, and pedal-paddle away (www.shuttlebike.it).

But citing the lack of marine-grade parts, Californian Judah Schiller believes he has improved on the design with his X1. The proprietor of Schiller Bikes in Mill Valley developed a bicycle specially for salt water, employing stainless steel parts and a “hard-anodized, powder-coated aluminum frame, for corrosion resistance; a proprietary pure-rotary drivetrain that weds Gates carbon-drive belts (i.e., no metal chain) with a NuVinci three-speed transmission; and two dual-chamber, puncture-resistant inflatable PVC pontoons.”

A key feature, Schiller says, are the twin oscillating propellers “that steer the craft and eliminate the need for a rudder. By pedaling, a rider turns the propellers via flexible, rotating driveshafts connected to the drivetrain. Both props turn at the same time, which provides dynamic steering capability. By turning the handlebars, riders can easily make turns in tight spaces. You can turn on a dime and even go in reverse.”

The inflatable pontoons and other parts fit into a car trunk or home closet. You won’t be pedaling to the beach, but once on the water, you’ll get decent speed in return for your effort. Top speed: 8 knots. Suggested retail price is: $6,495.