The Dutch firm Van Oossanen & Associates (VO&A) is a world leader in optimizing hullforms for ships and motor-yachts. We profiled Peter van Oossanen in PBB No. 121, recounting how his now-fabled wing keel on Australia II helped win the 1983 America’s Cup. In Rovings, PBB No. 134, VO&A’s Fast Displacement Hull Form (FDHF) was described on page 10, noting that Heesen Yachts (Oss, The Netherlands) was the first builder to adopt the hybrid round-bilge form that incorporates a chine in the forward part of the hull, a small immersed transom, and “smart” running trim control by means of a combination of specially shaped propeller tunnels fitted with trim wedges, and adjustable interceptors. The hull design improves efficiency across a broad range of speeds, from cruising speed to fast. 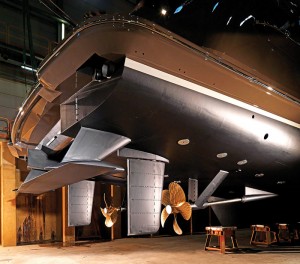 The patented Hull Vane, developed by Van Oossanen & Associates to improve the efficiency of motoryacht and ship hullforms, was tank-tested at the Wolfson Unit.

Peter van Oossanen, who has turned over management of the business to his son Perry, continues to research ways to improve boat and ship performance. VO&A’s patented Hull Vane, also mentioned in that write-up, he says, “is a fuel-saving device in the form of a fixed foil, located below the stern of a ship…where it affects water flow at the transom, influencing the stern wave pattern and creating hydrodynamic lift, which is partially oriented forward. This results in a reduction in the ship’s resistance. The performance of the Hull Vane depends on the ship’s length, speed, and hull shape in the aft sections, and ranges from 5% to 15% for suitable ships. In specific cases, savings up to 20% are possible.” He says it’s best suited for vessels of moderate speeds with Froude numbers above 0.2: ferries, supply ships, container ships, naval vessels, and somewhat faster merchant ships.

In the video above (also posted on VO&A’s website), van Oossanen describes the four effects of the Hull Vane:

Because there are no moving parts, no maintenance is required other than antifouling coatings. The device is touted as a capital investment that will provide returns during the life of the vessel.

The first yacht equipped with a Hull Vane is the 42m (138‘) Heesen motoryacht named Alive. Sea trials indicate the vessel requires 35% less power to achieve 16 knots in flat seas. An analysis concluded that “in seas with 1–2 metre [3.2‘–6.6‘] waves, rather than hindering her performance, the yacht’s Hull Vane technology converts the movement and generates 20% more thrust, and comfort is improved as the pitching is reduced by 40%. Like an aircraft, as the yacht moves through water, the wing produces lift. This patented Hull Vane technology converts this movement into thrust.”

The Hull Vane can either be incorporated in new designs or retrofitted to existing hulls.