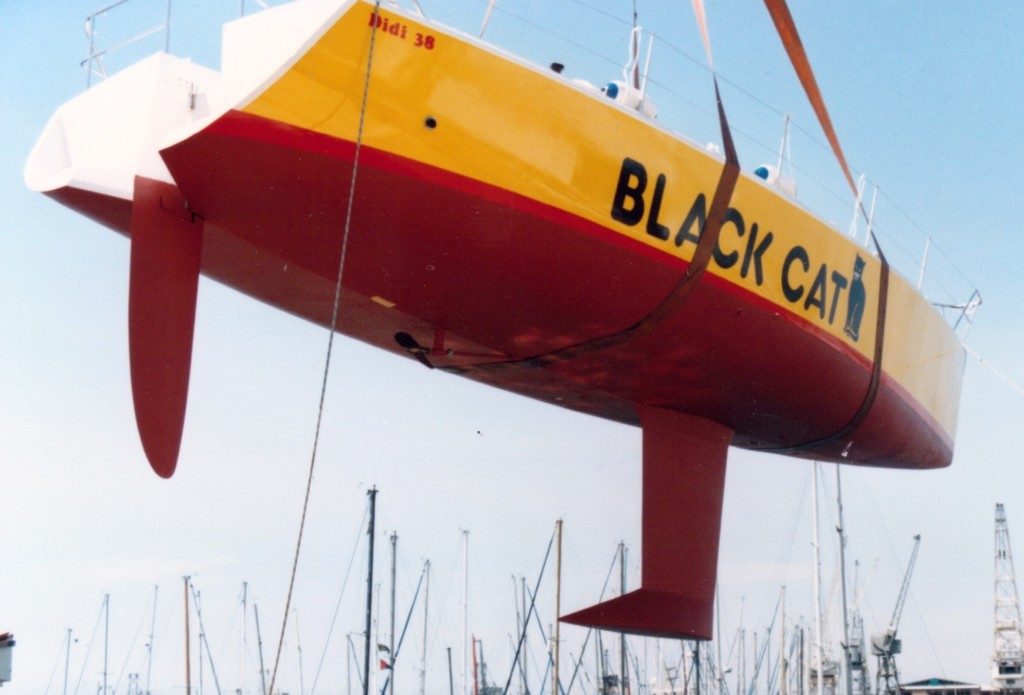 Looking back at the 2014 capsize of his Didi 38 (37’9”/11.5m) design Black Cat (shown on launch day, in 1995), Dudley Dix says, “There was nowhere else in the world that I would have preferred to have been at that time. There can be few designers currently alive who have been inside a big boat as it is turned over by the forces of nature, to experience the feeling of being mixed up with the equipment, cabin soles, stores, etc., like the flakes of color inside a kaleidoscope.”

Editor’s Note: Last year, yacht designer Dudley Dix wrote one of Professional BoatBuilder’s most unforgettable stories. In “Capsize!” (No. 149), he recounted when a freakishly large wave rolled over his radius chine design Black Cat during the 2014 Cape (Town) to Rio Race. Dix, who designed and built the boat, was also its skipper when it capsized, affording him the rare opportunity as a designer to learn firsthand exactly what happened when the boat turned upside down and came up again.

A native of South Africa, Dix has been learning from big waves for a long time. In an interview with Metal Boat Quarterly editor and marine surveyor Dylan Bailey (reprinted in part below), he shares some of those experiences including how he got his start as a designer, his forays into amateur boatbuilding, his work with radius chine design, and his thoughts about the capsize—now that a year has passed.

Dylan Bailey: Dudley, when did you get interested in boats and start sailing?

I sailed with my dad from before I can remember. He was a provincial champion in the Flying Dutchman class and my memories of sailing with him are of high speed, flying spray, and lots of laughter. It is no wonder that I am also a speed freak on a sailboat. We lived on the side of a lake and I sailed my own boat there from my early teens.

DB: You are known as a yacht designer. What some of our members might not know is that you are also an amateur boatbuilder. Would you tell us about the boats you have built?

I have built three big boats and a few small ones. I am a professional designer but an amateur boatbuilder, with all of the passion and peculiarities that go with that title. My first big boat was Tai-Neam, a van de Stadt design of 36′ (11m). Next was Concept Won, a 34′ (10.4m) to my CW975 design. Last was Black Cat, prototype of my Didi 38 (11.6m) design and forerunner of my range of designs for radius chine plywood boats. 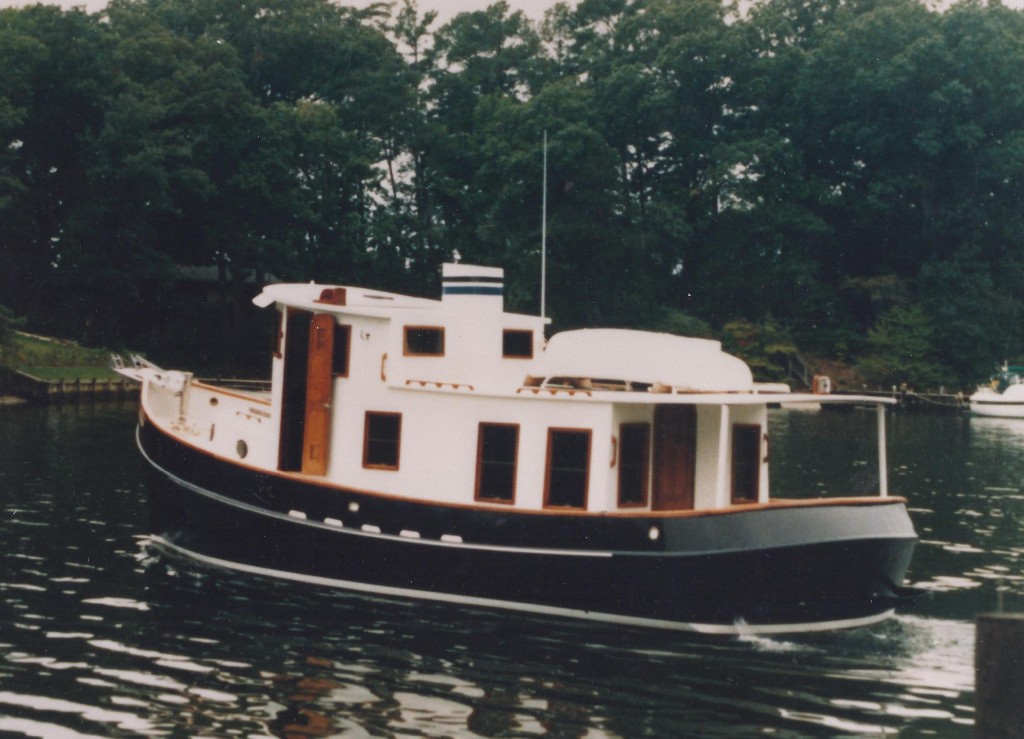 A sampling of Dix’s designs includes more than fast sailboats, including this 38’ (11.6m) Echo cruiser tug, which Howdy Bailey (Dylan’s father) built in the late-80s.

Of the smaller ones, there are two standouts. First was a 15′ tortured plywood beach catamaran in the early 70s and also the first boat that I designed. The other is the boat that I currently sail and the prototype of my Paper Jet design. This is a high-performance skiff that I sail single-handed on trapeze with main, jib, and asymmetrical spinnaker.

DB: Did building your first boat make you want to be a yacht designer?

It was building the van de Stadt design that made me want to be a yacht designer. There were some modifications that I needed to the design and van de Stadt did the structural, rig and ballasting changes, while I did the accommodation and deck redesign. That got me interested, so I enrolled with Westlawn and got my diploma through them.

DB: What was your first design?

I never marketed the beach catamaran, so I guess that I shouldn’t count that one. The drawings were hardly more than sketches that only I could use. CW975 was the first complete design that I drew, while not yet halfway through my Westlawn studies. It was for the 1979 Cruising World Design Competition, which it won. At the time we were planning to go cruising on Tai-Neam. When I received news that the CW975 had won the design competition my wife told me that no self-respecting designer would own a boat designed by someone else, so Tai-Neam immediately went up for sale and I started to build Concept Won.

DB: What was your first metal boat design?

I had a friend who built the same van de Stadt design as me but unaltered. A few years later he was planning to build a steel boat to go cruising and I asked if I could design it. He turned me down and planned to build a design from a well-respected designer. A week after I won the design competition he commissioned the new design from me, for a 35′ (10.7m) cruiser that I named the Pratique 35. He later started a professional yard and eventually built over twenty steel boats from 30′ to 50′ (15.2m), all to my designs and most of them new designs that he had commissioned.

DB: How has building your own boats and sailing them influenced your design work?

I was heavily influenced by Ricus van de Stadt, who developed fast lightweight boats and was the pioneer for plywood sailboats. There were many of his boats sailing in South Africa. His standard of detail was very good for amateur builders and I styled my standard of detailing on what I saw on his drawings. Once I got into designing boats I followed my own ideas on hull styling, seakindly hull design, aesthetics, etc., and soon learned what works and what doesn’t. I sometimes found that I drew details that I thought would be good for others to build, then while building them myself I decided that they were too much effort and figured more efficient methods. In the process I moved away from complicated concepts and ended up at “elegant simplicity.” 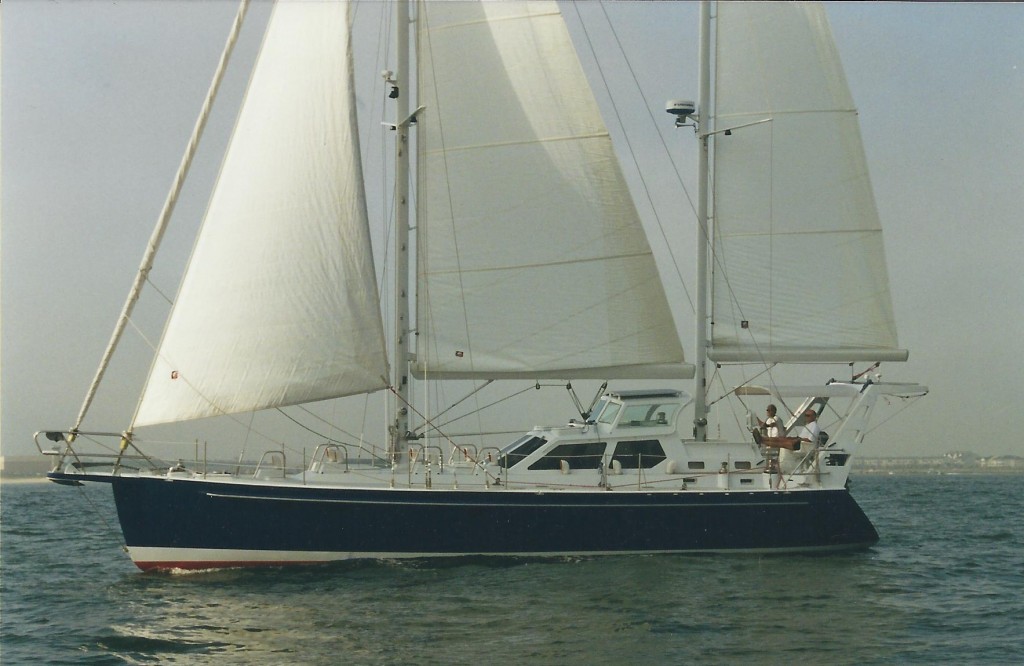 When Howdy Bailey began building Sabbatical II in 1998, the 50′ (15.2m) all-aluminum ketch was the sixth Dix design that Bailey had worked on at his yard, Global Yachts, in Norfolk, Virginia; five of those boats were either Bailey’s commission or built for a client based on his recommendation. Read more about Dix’s work with Bailey on his blog.

How sailing my own boats influenced my design work is more a matter of where I sailed them than the fact that they were my designs. I grew up in Cape Town and that is where I did most of my sailing. Cape Town is known as the Cape of Good Hope but also as the Cape of Storms. Cruising circumnavigators regularly report that the worst winds and seas of their voyaging were experienced rounding the Cape of Good Hope. Sailors from there are well-known for heavy wind ability because we have to learn how to handle the conditions or miss out on much of the sailing. That knowledge and experience affects my designs more than anything else; seaworthiness is a prime factor in what I draw.

DB: You once told me, and I am paraphrasing here, “I suffer from seasickness and I design boats that I would be comfortable on.” Could you explain what makes your designs comfortable offshore?

I sailed in the 1993 Cape to Rio Race on a Shearwater 39, a moderate displacement cruiser that is seakindly, quite beamy and very comfortable at sea. During that race I decided to design and build a boat of my own for the next race but it was going to be 50% of the displacement on similar waterline length, so would be a lively boat. Lively motion translates into discomfort in big seas so I had to be careful with hull shaping to make it comfortable. I used a much slimmer hull, shorter overhangs, unbalanced ends and concentrated the major weights in the middle. The result was a very comfortable and light boat that is also very quick.

DB: Last year you experienced a capsize on a boat you built and designed for the Cape to Rio race. Your articles about this capsize have appeared in Professional BoatBuilder and Cruising World. This must be quite a learning experience for a yacht designer?

Yes, our capsize was a learning experience. Afterwards a few people said that they bet that I wished to have not been there. My response was that, aside from still being in the race to Rio de Janeiro for a good result, there was nowhere else in the world that I would have preferred to have been at that time. There can be few designers currently alive who have been inside a big boat as it is turned over by the forces of nature, to experience the feeling of being mixed up with equipment, cabin soles, stores, etc., like the flakes of color inside a kaleidoscope. 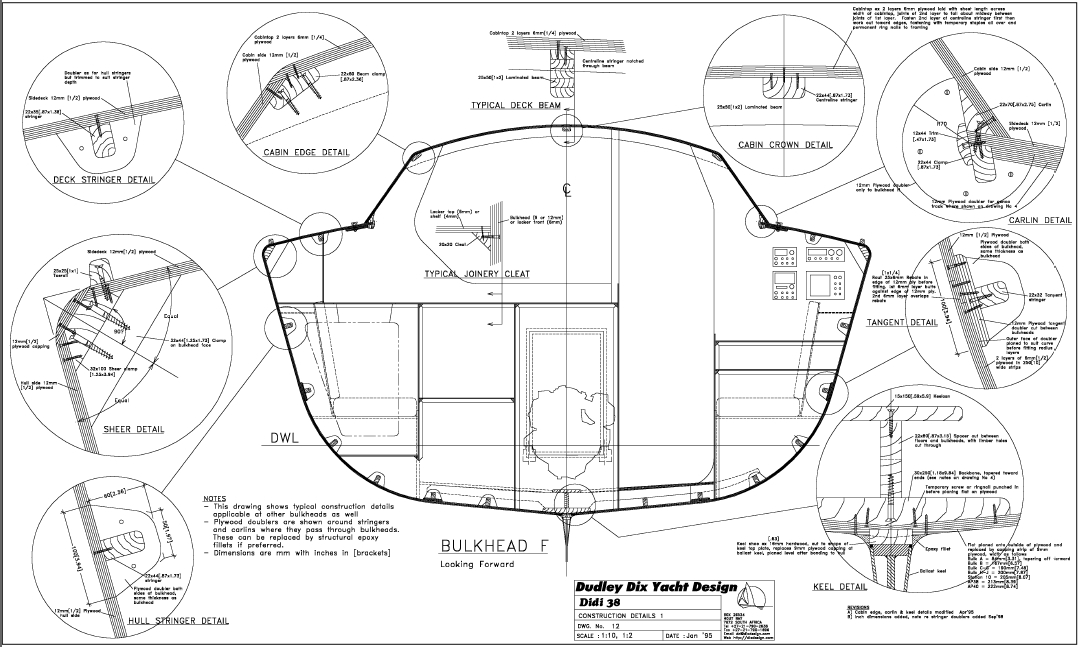 Black Cat was the prototype for the Didi 38 design (for which construction details are shown here) and the first of Dix’s line of radius-chine plywood/epoxy boats.

A designer is steered by his experiences on a boat. If I had spent my life sailing in ideal conditions then the boats that I would have drawn would have been very different from those that have grown out of my experiences sailing off the Cape of Good Hope. The experience of what extreme seas can do despite careful preparations is invaluable and will always be in my subconscious when drawing offshore boats in the future.

The experience ratified one of the cornerstones of my design philosophy for offshore boats and that is the need for a healthy stability curve, with high angle of vanishing stability and minimal negative stability if inverted. There are many boats that would not have come back upright if capsized in the way that we experienced or would have taken a long time to do so. We were upright again in well under 10 seconds, yet the boat took in enough water to kill most of the electrics and electronics and left a lot to pump out. Staying capsized for even a few minutes will introduce considerable risk of the boat sinking and some of the crew drowning.

I learned also that just because there is a big wave to turn the boat over there may not be another to turn it back again, so the boat has to be able to do this itself. We were capsized by waves piled on top of each other to form one monster peak that existed only for a few seconds right where we happened to be. After it passed we saw no others even half the height of that monster

Read the rest of the interview on Dylan Bailey’s blog, Metal Boat Surveyor.

About Metal Boat Quarterly: As the flagship publication of the Metal Boat Society, the Metal Boat Quarterly, also known as the MBQ, is the only magazine devoted exclusively to metal boats. It serves as a resource for builders, owners, and would-be owners of metal boats. Articles, which range from design and building to cruising and repair, are contributed by MBS members, MBS commercial members, yacht designers, and other members of the marine industry, including regular contributors Ted Brewer, Dudley Dix, and John Simpson. To learn more, visit http://www.metalboatsociety.com/quarterly.htm.